SAN FRANCISCO -- It took just 32 seconds for a man in the blue t-shirt and cap to walk into a San Francisco art gallery and walk out with a $20,000 Salvador Dali etching in his right hand. It's a crime that was captured on numerous surveillance cameras. And it's a story you'll see only on ABC7 News.

"They just popped into the gallery, probably distracting one of my coworkers," said Angela Kellett, Gallery Director of Dennis Rae Fine Art. Kellett told ABC7 News that another employee was working Sunday afternoon, when Dali's "Burning Giraffe" disappeared from an easel at the front of the store.

"It was our showcase item," explained Kellett. "We have a special Salvador Dali show right now and yeah they just ran off with it, too quick for anyone to do anything about it." 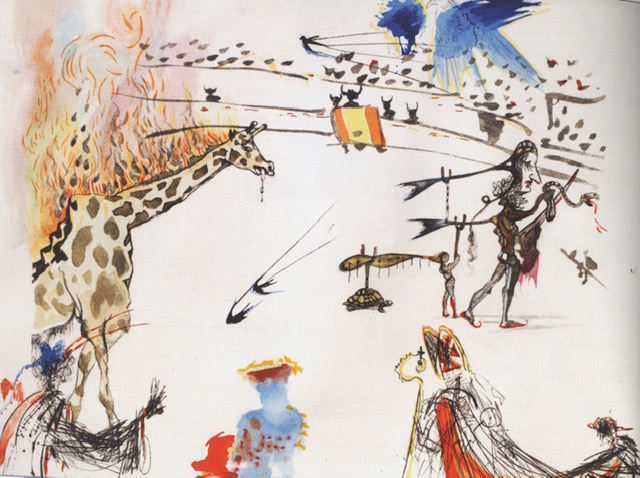 "It's quite important as far as the period of etchings," said Kellett. "It's very, very well known. It's a beautiful piece. It was inspired by Picasso first."

It was part of a larger collection of the Spanish surrealist's work at Dennis Rae Fine Art, just off Union Square.

On the surveillance video, it appears the suspect had an accomplice, a woman who was with him near the front door but stayed outside.

Once he leaves with the etching, the man strolls down Geary Street toward Powell Street. The walk was captured by several surveillance cameras along the way.

The Dali etching would normally have been secured to the easel, but somehow the lock and the cable were also mysteriously missing. It's not clear if the suspect came in earlier and cut the cable, or was able to do it in the half minute he was inside the store.

Kellett said it's not the kind of thing that one would sell on eBay.

"I think that people would know. It's a very small edition of etchings, so the number, we know exactly what piece it is, so now it's a very hot item," she said.