Demonstrations against Islamic law met with counterprotests against hate 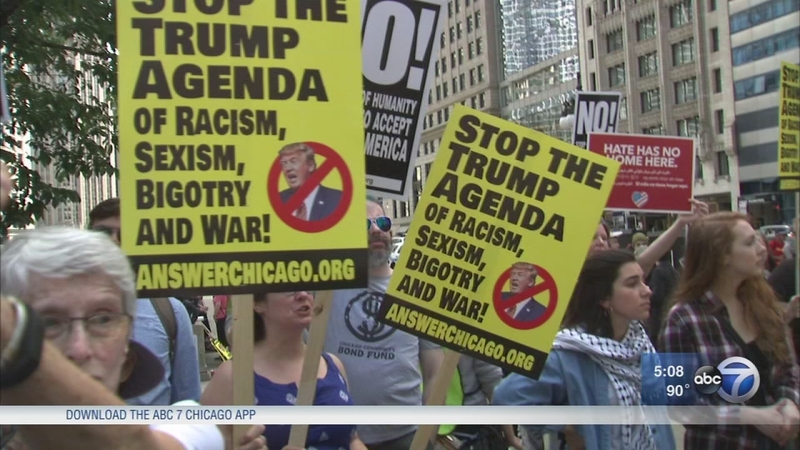 CHICAGO -- Dueling demonstrations in Chicago and many other cities were held Saturday between those who raised the specter that extremist interpretations of Islamic law might somehow spread across the U.S. and others who called such fears unfounded.

The demonstrations were held in more than two dozen U.S. cities, including Seattle, New York and San Bernardino, Calif.

In Chicago, a handful of protesters at the corner of Wabash and Wacker spoke out against Sharia law and the way women are treated in certain Muslim-majority nations.

"How can try ignore some of the abuse toward woman. Making them veil. In some groups it's acceptable to beat wives," protester Ginny Procuniar said.

Standing in opposition to the group were a much larger group holding signs that read "We stand against hate and bigotry" and chanting "No hate. No fear. Immigrants are welcome here."

"We are here to say no we do not accept a fascist America, and Trump is the head of it. He's the one unleashing this kind of madness," said protester Lina Thorne.

Many of the counter-protesters said they were also seeking to stand against President Donald Trump's travel ban, which seeks to block travel from several majority-Muslim countries into the U.S. The U.S. Supreme Court has been asked to review the ban.

Police physically separated the groups from each other, but the protest was peaceful.

However, Seattle police used tear gas to disperse rowdy demonstrators and made several arrests following an anti-Shariah rally and a much larger counter-protest.

The department said it was still reviewing how many people were arrested and what charges they might face, but at least some were expected to be booked for investigation of assault.

Minnesota State Police made seven arrests as fights broke out during demonstrations at the state Capitol in St. Paul.

At least 20 people including a Republican candidate for Georgia governor gathered in an Atlanta park for a protest against Islamic law.

The rally was organized by ACT for America, which claims Islamic law is incompatible with Western democracy. The organization says it opposes discrimination and supports the rights of those subject to Shariah. However, the Southern Poverty Law Center, which tracks hate groups, calls it the largest American anti-Muslim group.

Rally participants and a handful of counter-protesters appeared Saturday in Atlanta's Piedmont Park. Counter-protesters held a banner reading "Refuse Fascism" and chanted while the other side shouted back about female genital mutilation and honor killings.

State Sen. Michael Williams, a Republican candidate for governor, spoke to the rally, according to his spokesman, Seth Weathers. Williams also posed for pictures with a militia group and called on attendees to "unite against Shariah law," the SPLC said.