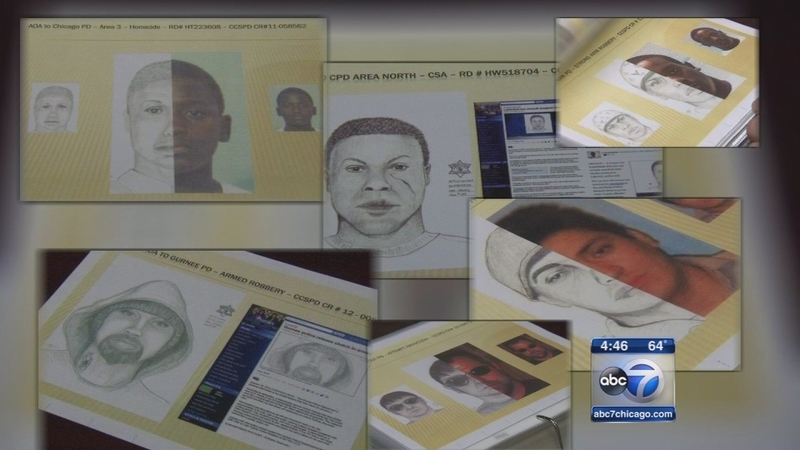 CHICAGO (WLS) -- Detective Tim McPhillips is the sketch artist Chicago police call when they need to put a face to a criminal. McPhillips' work has been instrumental in helping solve some of Chicago's most vexing crimes.

"Would you say his eyes are deep set?" Det. McPhillips said as he works on a sketch. While he carries a gun, his weapon of choice is a pencil. He's one of only 33 certified forensic sketch artists in the country and the only full-time police artist in the Chicago-area.

"You think his hair is almost receding? This area is more profound?" he said.

McPhillips, who was trained by the FBI, was brought in on some of the city's biggest cases. Last month he had the grim of duty of looking over the dismembered body of a child whose body parts were found in the Garfield Park Lagoon. From his review of the remains and X-rays, McPhillips was able to create an image of what the child may have looked like.

"A lot of cases stick with you. There are things you can't un-see. You just have to think there's a family member out there who wants to know where there loved one is," Det. McPhillips said.

Another case, the murders of five women at a Lane Bryant store in Tinley Park, led him to turn his office doodles into police work. McPhillips worked up a sketch of the suspect. In another case, McPhillips drew up a sketch of a man seen in the suburban neighborhood where a girl was murdered in her home.

"A Willow Springs officer, after his weekend off, came back and saw the sketch and said, 'I stopped that guy at the 7-11,'" Det. McPhillips said. "That broke the case open."

Extracting details from traumatized victims is an art in itself.

"When they come here and I talk to them, next thing I know I'm getting details they didn't even think they knew. A scar like this, a crazy looking eyebrow, a droopy eye," he said.

Images like those that can put a face on a criminal.

"This is my niche. This is what I know. And it helps bring some guys in for an interview," he said.