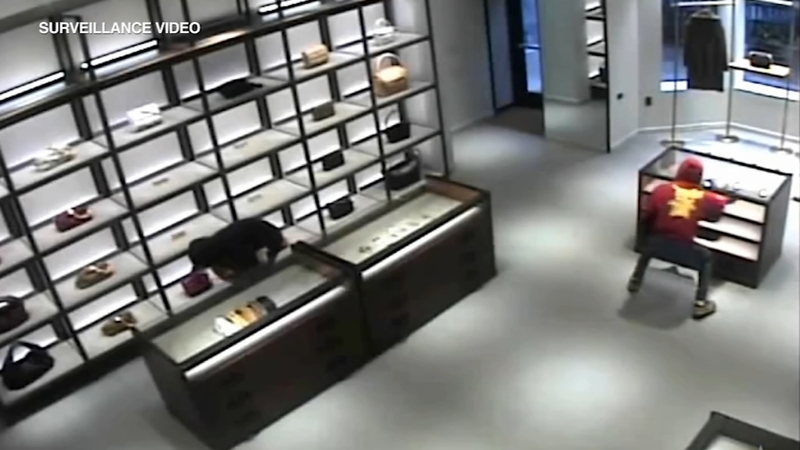 CHICAGO (WLS) -- Smash and grab thefts by organized groups have become routine. Even with some recent high profile arrests there is finger-pointing on who is to blame. Now there is a big push for harsher penalties and more flexibility in prosecuting these cases.

"We get customers, they don't want to come here. They think we are in a war zone," Joe Abbas, general manager of Bentley Gold Coast, told the I-Team.

His luxury car dealership is a target for organized retail theft rings. Abbas said it was hit serval times over the past couple of years; during the riots in 2020, and then wrist watches worth $1 million were stolen from the show room during a mid-day smash and grab in December.

"So it was kind of like scary moment," said Abbas. "My son had to run to an office and hide in the corner."

Carlos Valliant was recently arrested for the brazen burglary. Chicago police are still looking for the other suspect. Tacarre Harper was arrested earlier this week. Chicago police say he was involved in nine different organized retail thefts since November, including two at the Burberry store on Michigan Avenue.

"Chicago is not a lawless city and you will be brought to justice," said Chicago Police Superintendent David Brown.

An I-Team data analysis shows in 2020, theft accounted for $4 billion in losses to retailers in Illinois. Organized retail theft has increased 60% nationwide in the last five years. In Chicago, according to CPD data, the number of overall retail thefts dropped during the pandemic.

Illinois House Republican Leader Jim Durkin said it's the organized rings that are on the rise.

"They're very sophisticated, they're fearless...and unfortunately, they are successful," he said.

He said not enough is being done to deter these types of crimes.

"The problem is, it's in Chicago, it's in the suburbs of Chicago and that is under the jurisdiction of the state's attorney of Cook County, who has stuck her head in the sand on one of the worst crime waves that we've seen occurred in the Chicagoland area since the Capone era," Durkin said.

"There's this belief that if we don't catch someone or if an arrest is not made within the first 24 hours or so, that person is somehow free and clear," said Cook County State's Attorney Kim Foxx. "There is a relentless pursuit of those who engage in this type of behavior."

Foxx said her office is reviewing the policies around smash and grabs and organized theft rings, which is different than simply shoplifting.

Durkin is sponsoring legislation that would allow charges for organized retail theft to be brought where the crime took place, where the stolen goods were recovered or where the merchandise was resold.

The bill would also make the crime a felony punishable by up to 15 years in prison if the value of the stolen items is more than $300.

"I believe that enhanced penalties for these types of offenses is a deterrent," said DuPage County State's Attorney Robert Berlin.

But many of these smash-and-grabs go unsolved. The Illinois Attorney General's Organized Retail Crime Task Force was formed to change that by proposing legislation that would charge through a statewide grand jury.

A recent bust by the task force recovered more than $1 million worth of items.

"I think there's a market for a lot of the goods that are being stolen," said Berlin.

"We've called to task online marketplaces to step up and take responsibility for policing their platforms," said Raoul.

Back in the Gold Coast, Abbas said he misses the days when 500 people would pass through his showroom on a Saturday. Now, the doors are locked and customers need an appointment just to get in.

"We are in the process right now of hiring like an armed security but I don't know if this is going to be the solution," said Abbas.

In DuPage County, violent crimes were on the rise for years, but last year armed robberies and burglaries went down according to the state's attorney's office.

Across Chicago and the suburbs, organized retail theft task forces are making it a priority to work with store owners and other partners to try to stop the surge of smash and grabs in our area.

We recognize community concerns around crime, and the impact it can have on one's sense of safety as well as the economic stability of a business. We believe the retail threshold at $1,000 for felony charges is in line with the rest of the country, and the CCSAO is currently reviewing available data and engaging with partners to see if this is still the best policy.

It is important to note, that cases of retail theft are not the same as "smash and grab" and organized theft rings. We will also be taking a look at our policies around those issues as we continue to prosecute retail theft cases as misdemeanors and felonies when appropriate to do so based on the facts and evidence.

Background:
In 2010, the Cook County State's Attorney's Office created the Cook County Regional Organized Crime Task Force (CCROC), a then first-of-its-kind task force of law enforcement and retail partners dedicated to combat the escalating crimes of organized theft and fencing in the Chicago metropolitan area. Since then, we have grown to more than 1500 participating members from over 120 law enforcement agencies and over 100 private companies from jurisdictions throughout the Midwest. 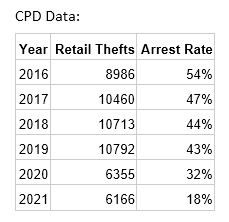