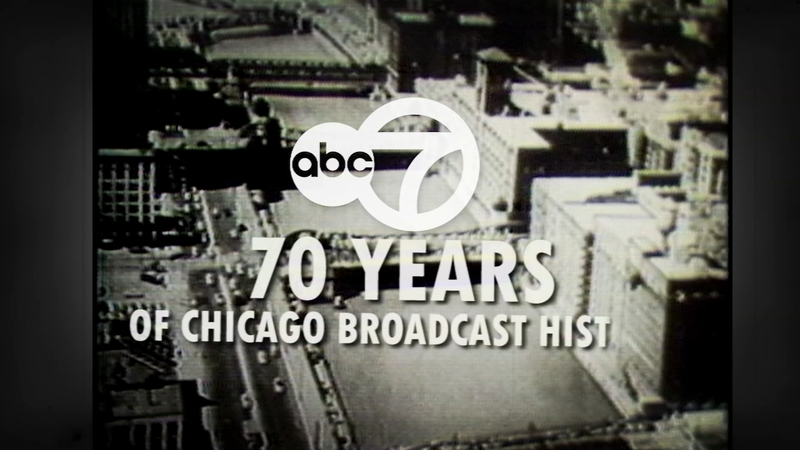 CHICAGO (WLS) -- September 17, 2018 is the 70th anniversary of ABC 7. Take a look back at the last seven decades of Chicago broadcast history:

September 17, 1948: WENR-TV/Ch. 7, an ABC owned station, signs on. The station's origins trace back to 1939, when W9XBK begins experimental broadcasts.

On October 13, 1943, W9XBK is renamed WBKB-TV and debuts on Ch. 4 as Chicago's first commercial TV station. During WWII, women ran the show.

In 1968, Ch. 7's call letters change to WLS-TV. That same year, Eyewitness News is launched. A dynamic team of anchors and reporters propel ABC7 to No. 1.

In 1984, Oprah Winfrey is introduced as the new host of "AM Chicago".

In 1986, the Oprah Winfrey show is nationally syndicated and lasts for 25 seasons.

January 6, 2007 ABC7 becomes the first station to broadcast all of its local news and programming in HD.

Take a look back at seven decades of Chicago broadcast history.

Our TV station actually began at 190 North State in 1939 as W9XBK. Co-creator Reinald Werrenrath, who is now 103 years old, was one of the originals to put it together. The content? Not exciting.

"We were on with test signals almost constantly," Werrenrath said.

Now for the 70th anniversary, Sept. 17, 1948. WENR-TV Ch. 7, an ABC network-owned station, signed on. However, five years later, it merged with WBKB. That TV marriage became Ch. 7 WBKB-TV, ABC. Programming was king at that time. Fifteen-minute newscasts were black and white.

Now retired, Reporter/Writer Frank Mathie and Assignment Editor/Producer Peter Bordwell began on the same day in 1967 at WBKB, when news was expanding to a half hour.

"There were no instant live shots. Everything was on film. The edits were tricky because once you cut the film, there was no way to put it back together again if you messed it up," Bordwell said.

In 1968, the call letters became WLS-TV. After decades where programs were more profitable than newscasts, a change came: The pairing of Joel Daly and Fahey Flynn, plus an emphasis on news.

"I was on the street every day. I think to have an anchorman who was involved in doing the news, not just reading it, gave us credibility," Daly said.

In 2006, a state of the art street-side studio opened. For seven decades we have brought into your home news, talk, sports, lifestyle, community and familiar faces, as ABC7 Chicago.

Wonder what our call letters mean over 70 years?

WBKB-TV stood for owners Balaban and Katz broadcasting. They were the movie palace builders.

WENR-TV was named after its owner, radio pioneer E.N. Rauland.