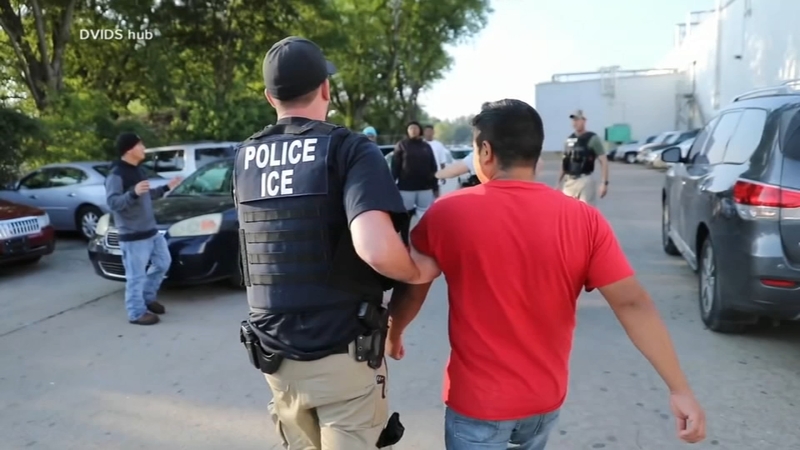 CHICAGO (WLS) -- Chicago-area groups are taking action after hundreds of Mississippi food plant workers were arrested by federal immigration officials in the largest raids in at least a decade.

Some of those arrested have since been released. But initially, children were separated from their parents, including 11-year-old Magdalena Gomez Gregorio.

"My dad didn't do nothing, he is not a criminal," Magdalena said about her father being arrested by ICE agents.

Up to seven poultry plants owned by several different companies were targeted. Park Ridge-based Koch Foods was one of them.

Chicago immigration organizations have been on high alert since President Donald Trump's administration threatened massive raids a few weeks ago. But the size of the Mississippi operation came as a surprise to the Illinois Coalition for Immigrant and Refugee Rights.

"Of course, we are really concerned that this is just the shot across the bow, that more such large-scale operations will happen in the future," said Fred Tsao, the group's senior policy counsel.

REMINDER: If ICE shows up at your door, you have rights. Memorize them.

The coalition and other immigrant groups, including Pilsen's Resurrection Project, have been spending the past few months making sure undocumented Chicago-area residents know their rights.

"People should know that their rights are to remain silent, to seek legal counsel and to have their case heard before an immigration judge," said Katherine Greenslade, an immigration attorney for the Resurrection Project.

The Resurrection Project also advises people to be proactive by preparing guardianship for their children.

Illinois Gov. J.B. Pritzker shared information on Twitter Thursday about what undocumented residents should do if ICE agents show up at their homes.

If @ICEgov tries to intimidate you or your family, know your rights.

The state of Illinois refuses to coordinate with federal immigration enforcement. I signed a law ensuring local law enforcement does the same.

We're doing all we can to protect our residents. #WelcomingIL pic.twitter.com/twSisDXRJC

While some of the children affected by the Mississippi raids have been reunited with their families, Chicago's Catholic Extension is setting up a fund to help the kids that have not.

"Just think of what it would be like in your own family, if all of a sudden, your kids came home and you weren't there, said Father Jack Wall of Catholic Extension. "It's such a traumatic experience."

Food, farm and labor organizations are also uniting to set up a bail fund for the workers arrested by ICE agents.

Some immigration groups believe the raids are related to President Trump's reelection campaign, while Homeland Security officials said they're about enforcing the rule of law.

The raids have been planned for about a year.
Report a correction or typo
Related topics:
societymississippichicagopark ridgeu.s. & worldiceimmigrationraid
Copyright © 2021 WLS-TV. All Rights Reserved.
More Videos
From CNN Newsource affiliates
TOP STORIES