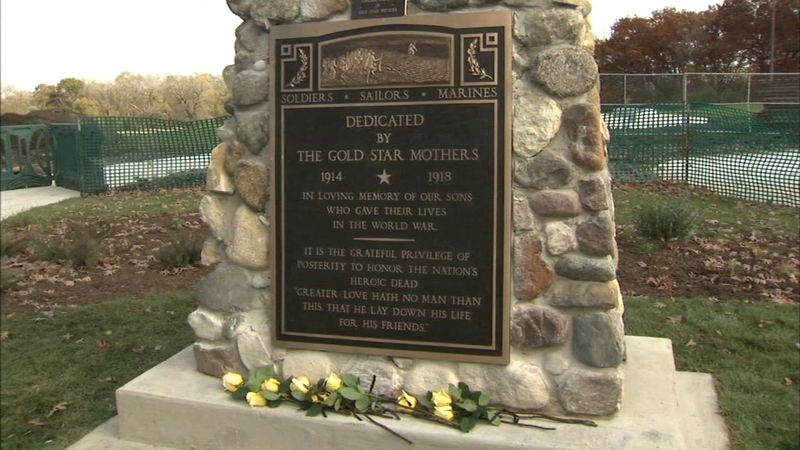 CHICAGO (WLS) -- Gold Star Mothers came together Thursday to rededicate a monument that mothers of fallen World War I soldiers had erected decades ago. Although 100 years separates them, the mothers from yesteryear and today share a deep loss: They all have a child who died serving the country.

"If you lose your parent, you're an orphan. If you lose your spouse, you are a widow or widower. But there is no word for a mother who loses their child. My son was my only child," said Denise Williams, mother of Andrew Meari, an Army private killed in Afghanistan. "He surpassed anything I could have hoped for as a mother, and now I get to spend the rest of my life honoring his service."

The monument at 87th Street and Western Avenue was nearly forgotten. About five years ago, Tim Noonan said he was walking with his children in the Dan Ryan Woods and found the old, dilapidated structure. He made it his mission to restore the Gold Star Mothers monument. Since then, a new plaque was added, along with an original plaque that reads, "Chicago Council of Gold Star Mothers."

Noonan said the restoration ensures no one, including Gold Star Mothers, is forgotten for the sacrifice they made.

"That's what this monument is about, to remember. They say 'lest we forget,'" he said.

And several Gold Star Mothers were grateful to see it restored including Modie Lavin, whose son Conner Lowry was also killed in Afghanistan. Lavin worked with Noonan to make sure the restoration happened. She said her son would be proud.

"He's just looking down, and I can just feel him giving me a hug and saying, 'Way to go, mom!" she said.