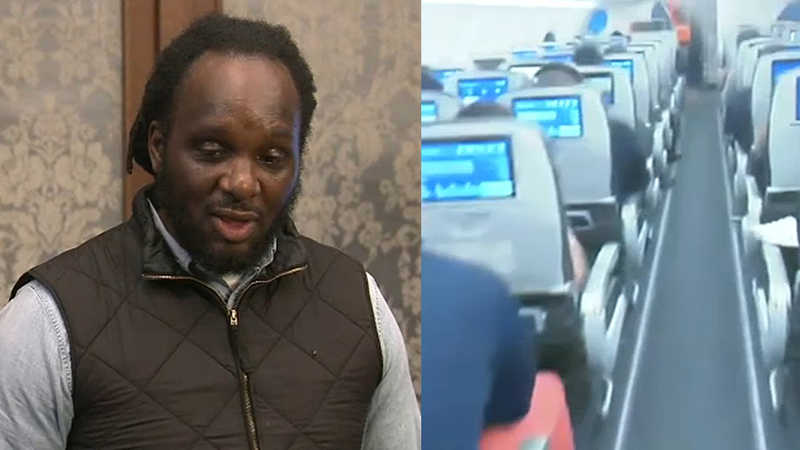 Man kicked off flight says he was victim of discrimination

NEW YORK -- A man from Brooklyn is speaking out about his recent experience on a JetBlue flight.

He says he was the victim of racial discrimination when he was kicked off the flight, even missing his Thanksgiving plans.

But the airline says that's not the case at all.

"I just asked a question, from that question it just snowballed from other events for me being moved up front," said the passenger, Shaun Lynda.

Cell phone video recorded the aftermath of the events that got the civic leader removed from the flight, causing him to miss Thanksgiving dinner with his kids.

"This is a very intelligent businessman in our city, in our borough who has given back, and for him to have went through that experience and the people who are around him clearly indicated this man did nothing wrong," said Brooklyn Borough President Eric Adams.

Adams stepped in to defend Lynda, who said that he was boarding a flight from Barbados to New York City November 28.

The flight attendants on board offered seating with extra legroom to a family. He then asked why, at which time he says he was offered the same upgrade.

But he says once he changed seats, another flight attendant sent him back to his original seat, and then approached him.

"She went down on one knee, started patting me on my leg, and said, 'Are you going to behave yourself?'" said Lynda. "I said to her, 'Why would you ask me that question?'"

"If he had placed his hands on the airline stewardess, that would be a level of inappropriate behavior," said Adams. "She should have never touched him."

JetBlue said in a written statement that the passenger "demanded an extra legroom seat," "declined to pay for an upgraded seat assignment," and "became angry and used inappropriate language with crew members."

"I was not cursing, I was not shouting as I don't use profanity. I was merely asking a question," said Lynda.

"There's inconsistencies in their story. And in policing we call that a lie," said Adams.

"To my surprise, I was put on another flight for the next day, and the actual seat that they seated me in was the seat they kicked me out of," said Lynda.

Now he has filed an official complaint with JetBlue and is considering other legal action.

"What they did in our view was inappropriate and violative of the law," said civil rights attorney Roger Archibald.

Here is the full text of the JetBlue statement:

"We take any claim of discrimination seriously. The decision to remove a customer from a flight is not made lightly and would never be related to a customer's ethnicity or race. Shortly before takeoff, a crewmember was reseating a family so the mother could sit next to her children as their seat assignments had them sitting apart. Because the only seats available were in a row with extra legroom, the crew offered the mother and her children those seats consistent with JetBlue's policy to make every effort to seat families together. Another customer asked the crew why the extra legroom seats were offered to the family and demanded an extra legroom seat as well. After the customer declined to pay for an upgraded seat assignment, he was asked to return to his originally assigned seat. The customer became angry and used inappropriate language with crewmembers, and as the situation risked further escalation in air after takeoff, the crew determined the customer would need to be rebooked on a different flight. As New York City's hometown airline, diversity is in our DNA, and we celebrate the many cultural backgrounds of our crewmembers and customers."
Report a correction or typo
Related topics:
societybrooklynnew york citydiscriminationjetblue
Copyright © 2021 WABC-TV. All Rights Reserved.
TOP STORIES
Tornado touches down in DuPage Co., damaging trees, homes
Mother killed, kids critically injured in hit-and-run on way home from Juneteenth event
Class action lawsuit filed over Rockton chemical plant fire
Lake Michigan drownings leave 2 dead, 2 critical over Father's Day weekend
49 shot, 5 fatally, in Chicago weekend violence
Amazon Prime Day is 'a really a big day for the scammers,' BBB says
Teen left homeless after parents deported graduates law school, hopes to inspire others
Show More
Amazon Prime Day sees Walmart, Target offering their own deals
'Sesame Street' features 2 gay dads for Father's Day
American Airlines cancels hundreds of flights, cites labor shortages
Chicago Weather: Limited sunshine, breezy, cooler Monday
SWAT team responds after woman shot in Loop
More TOP STORIES News