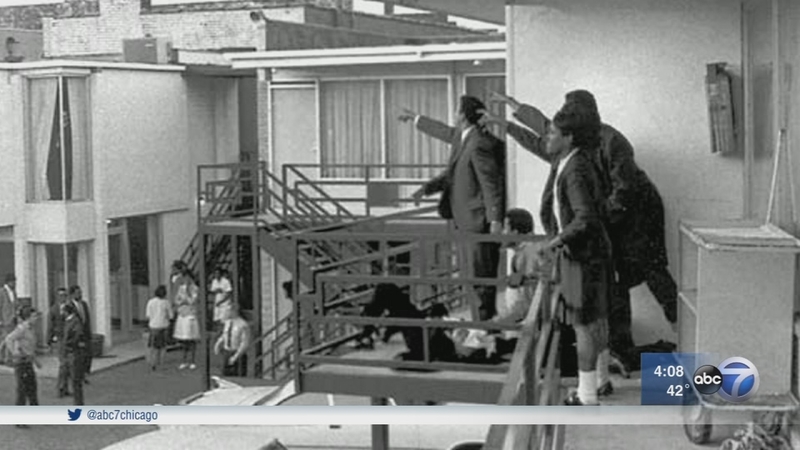 Visitors travel to Lorraine Motel, where MLK was shot

MEMPHIS, Tenn. (WLS) -- Rev. Jesse Jackson, Jr. and other Chicagoans were in Memphis on Tuesday ahead of commemorative events to mark the 50th anniversary of Martin Luther King, Jr.'s assassination.

Many found themselves drawn to the Lorraine Motel, where King was killed on April 4, 1968, including Reverend Jesse Jackson who was at King's side that day.

"The replay is never any better," Jackson said. "You take the scab off the sores, it's as raw as it was. Still bleeding."

Chicagoans are headed to Memphis to commemorate the 50th anniversary of Martin Luther King, Jr.

The emotion running through visitors to the sacred site is part of the draw of being there. A group with Chicago's Rainbow PUSH coalition took an overnight bus to Memphis, and said the journey was an honor.

Visitors came from all over, many admirers of King's philosophy of non-violent protest for equality.

BLACK LEADERS REFLECT ON EVE OF MLK ANNIVERSARY; EVENT REMEMBERS 'I'VE BEEN TO THE MOUNTAINTOP' SPEECH

Reverand Jesse Jackson reflected on the assassination of Martin Luther King, Jr., from the balcony of the Lorraine Motel where he was killed.

An event scheduled for Tuesday night at Mason Temple will commemorate King's famous and final speech, known as "I've Been to the Mountaintop," the night before his death. Panel discussions were also scheduled about King's impact.

"I've Been to the Mountaintop" was delivered in support of the striking sanitation workers who wanted to form a union for better working conditions and fair wages.

Union members from across the country participated in a day of action at the Mountaintop Conference. Eddie Sanders is from Chicago, but he lived in Memphis when King was killed.

"It was a sad day, I marched with King and the striking workers," he recalled.

"King was a man of non-violence, he led with love. We need everyone to make this work," Sanders said.

Congressman Bobby Rush (D-IL) said returning to Memphis has been a reflective experience for him.

"Chicago, I recall the rioting. I recall that on the wayside, parts of the South Side, there was anger, bewilderment. Shock, followed by anger," he said.

Rush said 50 years later, the anger has been replaced with wisdom and determination to live out what he called King's conscience.