Trooping the Colour: Why does Queen Elizabeth II have two birthdays?

WLS
Queen Elizabeth II is celebrating a birthday on Saturday, but it's probably not the birthday you are thinking of. It's the queen's official birthday, more commonly known as Trooping of the Colour.

Why does the queen have two birthdays?

Queen Elizabeth II, the longest-reigning monarch in British history, was born on April 21, 1926. When she ascended the throne in 1952, she gained a second birthday celebration in June, her official birthday celebrated during a public ceremony in London called the Trooping of the Colour.


What is Trooping the Colour?
The Trooping of the Colour tradition has celebrated the birth of the British Sovereign for more than 260 years, according to the palace. It usually falls on the second Saturday in June.

Why is it called Trooping the Colour?

"Trooping the Colour" is a term that refers to a ceremony in which British soldiers carry military flags. The "troops" who participate in the day's events are "fully trained and operational soldiers wearing the ceremonial uniform of red tunics and bearskin hats," according to the palace. "Colour" is another word for flags.

What happens during the Trooping of the Colour?

The event includes a parade with hundreds of musicians, soldiers and horses. The public lines the streets to watch the parade, which also includes members of the royal family.

The day concludes with a fly-by of the Royal Air Force and a 41-gun salute. To watch this, members of the extended royal family gather on the balcony of Buckingham Palace.

SEE ALSO: The line to the British throne explained

The iconic photos have made the balcony gathering one of the most recognizable traditions of the royal family.

PHOTOS: Trooping the Colour through the years

Fun facts about Queen Elizabeth for her birthday
QUEEN ELIZABETH

It's final: Harry and Meghan won't return as working royals 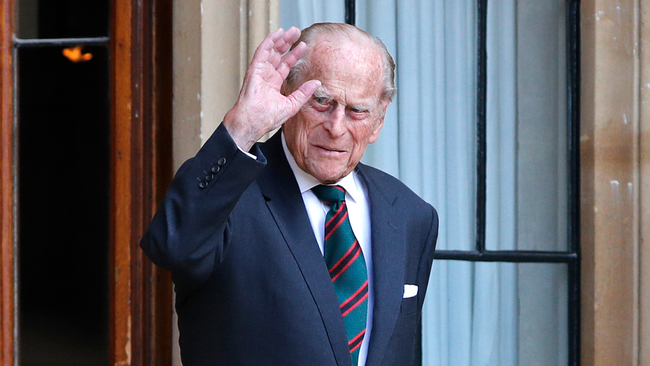