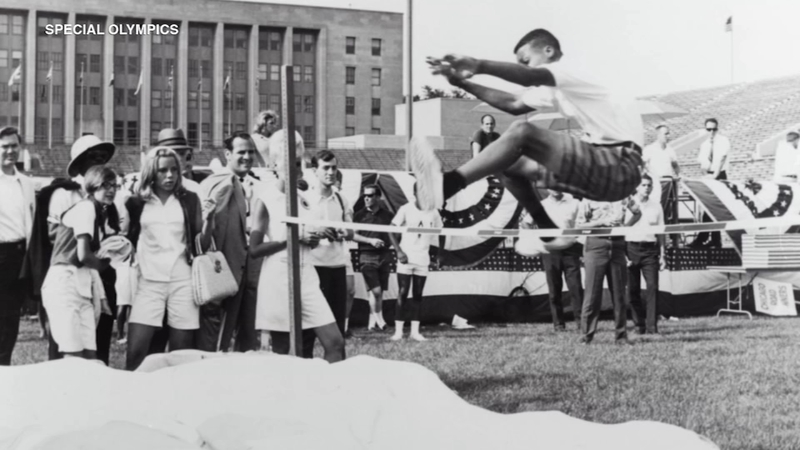 CHICAGO (WLS) -- The first Special Olympics, held on July 20, 1968 in Soldier Field, marked a turning point for Americans with intellectual disabilities. The first games were the culmination of years of work by two women, one of them from Chicago's South Side.

Illinois Supreme Court Justice Anne M. Burke started out as a physical education teacher for the Chicago Park District. She said her interest in working with people with intellectual disabilities was initially met with suspicion by parents.

"(There was) a lot of (pushback)," Burke recalled. "In fact I had to advertise in the local newspapers in Roseland, 'cause I taught in West Pullman Park at 123rd and Princeton, if you have a child with intellectual disabilities - and we didn't use those words at the time, there were more difficult words to use that we don't use today - please bring your child to the park. And I almost had to promise there would be no bullying, I won't accept it, the-- it was difficult and parents had a hard time coming at first. But once they saw, they came."

During the same time Eunice Shriver - sister of former president John F. Kennedy and Senators Robert and Ted Kennedy - had been working with her family foundation to advocate for people with intellectual disabilities. It was a cause close to her heart; her oldest sister Rosemary was born with intellectual disabilities, and was left permanently incapacitated by a prefrontal lobe lobotomy when she was 23 years old.

Shriver not only embraced Burke's project, she encouraged her to expand it to include the entire country.

In January 1968, Burke traveled to Washington D.C. to meet with members of the Kennedy Foundation and begin planning the first Special Olympics. While the foundation embraced her mission, most were not so accommodating.

"I think the one challenge that was most difficult was having people help us, people who never saw a child with intellectual disabilities," Burke said. "As a matter of fact there was a huge charity here in Chicago, which still exists, and we went to see them and ask them for funds and I got yelled at, kicked out of the office pretty much. 'Who do you think you are putting these people on display?' In 1968. Of course now, look what it's shown. It didn't deter me at all. They just, I felt, were not knowledgeable."

Burke was not deterred. In March 1968, the Kennedy Foundation and Chicago Park District announced the first Special Olympics would be held at Soldier Field.

The first Special Olympics International Summer Games on July 20 involved about 1,000 athletes from the United States and Canada participating in more than 200 events, from the high jump to water polo. While the games were a competition, they were also an opportunity to uplift the community and have a whole lot of fun.

"Former Olympic champion swimmer Adolf Kiefer owned a pool company and we were able to acquire a huge swimming pool that was put in the north end of Soldier Field," Burke recalled. "It was three and a half feet deep so watching the kids swim back and forth was great. But I think one of the funniest things was, Mrs. Shriver, she goes, 'I wanna go in the pool.' So she had to send somebody to Sears to buy a swimsuit for $10 and then she jumped in the pool. And of course all the kids loved it."

The games were such a resounding success that Shriver pledged to bring them back every two years, calling them the Biennial International Special Olympics.

"The movement has created an opportunity to erase stigma regarding people with disabilities," Burke said. "I mean if you talk to any one person today it's a no brainer because kids are in school with each other...kids go to school with each other up to 22 and they're best buddies, they help each other, all kinds of things. It's the best of both worlds where young people, starting from a very early age in grammar school, know there are differences because we all have differences and that we are going, as a society, to help each other, and it's just a normal thing now."