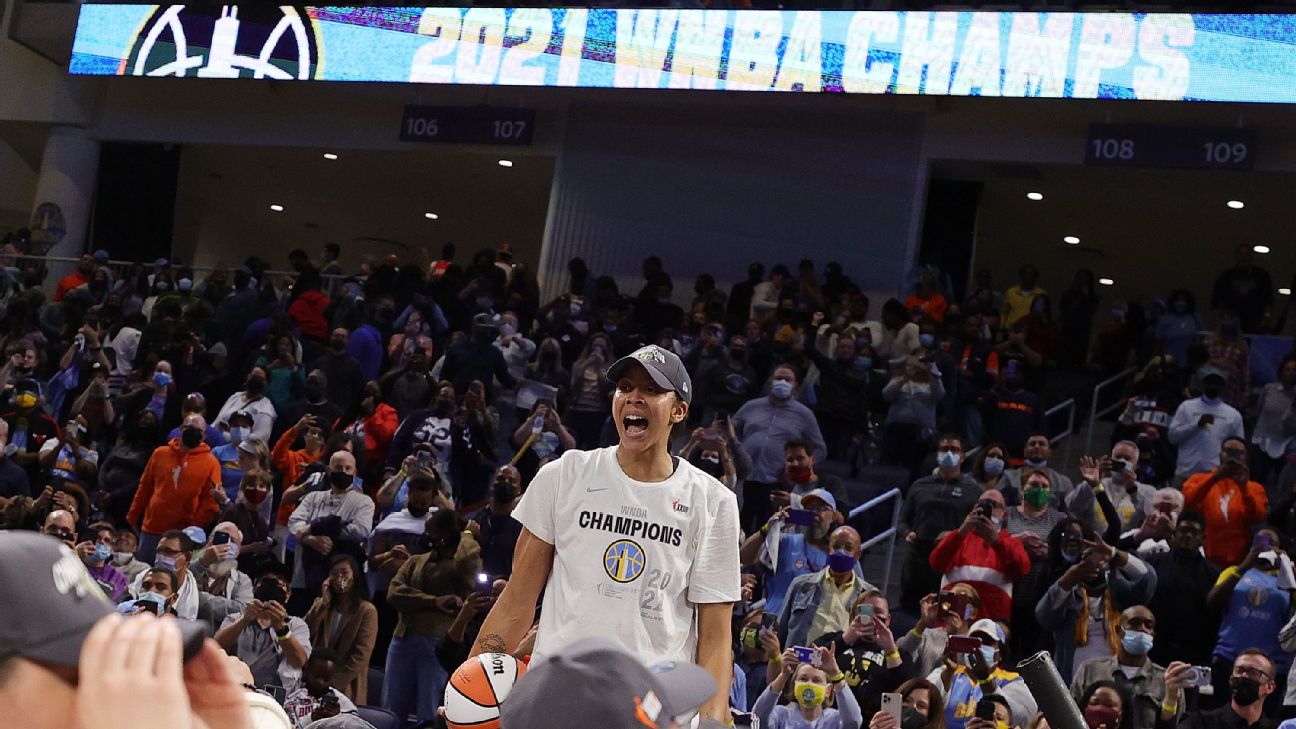 CHICAGO -- Candace Parker raced to the sideline to embrace her family, tears already in her eyes. Within minutes, "We Are the Champions" was belted out by a packed Wintrust Arena.

For the first time, the Chicago Sky have won the WNBA title, and two hometown heroes came through to get the Sky this precious hardware with an 80-74 Game 4 victory over Phoenixon Sunday.


"It was amazing to just hug my dad and my mom and my family," Parker said. "It was just an amazing feeling to be from here and see so many people in the stands that have been supporting you since you started."

Parker, who grew up in suburban Naperville, Illinois, starred at Tennessee where she won two NCAA titles and then was the No. 1 draft pick, MVP and Rookie of the Year in 2008. It took until 2016 for her to win her first WNBA title, with the Sparks, but she decided earlier this year to leave the only WNBA team she had played for and come home as a free agent.

"Everything that this team went through the entire year prepared us for this," Parker said. "We were down nine, we were down 11. We just got to stay with it, and that's what we've done all season. I am so proud of this group, with our fight, next man up mentality.

"My high school coach is here ... I mean, we got the whole city here and this is amazing how Chicago supports. I mean, we're champions for life now."

The Sky had to do this the hard way Sunday, trailing much of the game with the worry of having to return to Phoenix for Game 5 if they lost. With 5:25 left and the Sky down 70-65, the theme from "Rocky" was played over the loudspeaker. That's a Philadelphia song, and proud North Philly native Kahleah Copper went on to be named WNBA Finals MVP. Her fighting spirit was emblematic of what the Sky did down the stretch to win: Everyone contributed.

It was sweet for Copper, who didn't play much her first four seasons in the WNBA but blossomed in 2020.

"I just came in and just tried to find my way," Copper said. "Just tried to find a road. I didn't play much, so let's do some handshakes, let's get everybody ready for the game, let's just try to figure it out, just play your role, and that's what I did. I'm just grateful for my process. I wouldn't change anything."

Phoenix coach Sandy Brondello credited Quigley, who had 11 of her points in the fourth quarter.

"Allie made some really big shots for them, got them back into the game," Brondello said. "We left her open, and she made them. Just had some little breakdowns at the wrong time."

Phoenix has won three titles previously, all with star Diana Taurasi. She and Skylar Diggins-Smith had 16 points Sunday, and Phoenix was led by Brittney Griner's 28. The Mercury players declined to speak with the media after the game. The door to their locker room was broken and a person familiar with the incident told the Associated Press that at least one of the team's players was responsible.


"It's fun being in the Finals. It's been a few years for us," said Brondello, referring to the 2014 Finals when the Mercury beat Chicago. "We have to remember that feeling, how hard we worked to get here, and move past it and forward."

Vandersloot, in fact, remembered the feel of 2014 and getting swept by the Mercury. She and Quigley, who are married, were both on that 2014 team.

"We did get a taste early what it felt like to be in the Finals, and we got our asses kicked," Vandersloot said. "But we did get that taste. We knew if we got the right people, exhibit A and B, that we could be in this moment, and it would be special." By A and B, she meant Parker and Copper, both of whom were big all season and came through Sunday.

With 1:57 left, Parker hit a 3-pointer to tie it 72-72. That was followed by two consecutive Stefanie Dolson layups fed by Vandersloot.

And it was fitting that Vandersloot, the longest tenured Sky player, had the final points at the free-throw line with 10.4 seconds left. Vandersloot finished with 10 points and 15 assists.

The Sky, who joined the WNBA as an expansion team in 2006, became the 10th franchise to win a league title, doing so in the WNBA's silver anniversary season. Chicago did it despite a 16-16 regular season record; at No. 6 the Sky are the lowest seed to win the championship since the WNBA went to its current playoff format in 2016.

The Sky debuted at 5-29 in 2006, missing the playoffs the first seven seasons before advancing to postseason for the first time in 2013 behind Rookie of the Year Elena Delle Donne and Sylvia Fowles. Both had been No. 2 draft picks, and they helped lead the Sky to the 2014 WNBA Finals, where they were swept by Phoenix.

Fowles was ready to move on the next year, sitting out until midseason when she was traded to Minnesota. Then after the 2016 season, Delle Donne also insisted on a trade, and went to Washington to be closer to her Delaware home.

But that February 2017 deal worked out for both teams: Delle Donne won a title with the Mystics in 2019, and the players who came to the Sky -- Copper and Dolson -- are part of this year's championship team. Copper, in fact, was the breakout star of this year's postseason.

Vandersloot was the No. 3 draft pick out of Gonzaga in 2011 and said she was surprised to be picked that high. But she's become one of the best point guards in the WNBA.

She had the second triple-double in WNBA playoff history during the semifinals and finished with a record 102 assists in this postseason. In her 11th season with Sky, Vandersloot won a title alongside Quigley.


Quigley spent her first five years after graduation from DePaul trying to catch on in the WNBA. She played 41 games for four different franchises during 2008-2011, wasn't in the league at all in 2012, and finally stuck with the Sky in 2013. She has averaged in double figures scoring for seven of her nine seasons in Chicago.

"I've never been one to say I don't have anything if I don't win a championship," Quigley said. "But I also know how much it means if you do have one. I feel like you're elite when you have a championship. It's just something in your legacy that makes you special."

During the free-agency process earlier this year, Vandersloot and Quigley shipped Parker treats from their favorite Chicagoland restaurants. Parker said she came to play for the Sky both because the Windy City was home and also because she saw what the Sky had been building and wanted to be a part of it.

The Sky's James Wade became the third Black coach to win a WNBA title, following Michael Cooper with the Los Angeles Sparks in 2001 and 2002, and Corey Gaines with Phoenix in 2009. He took over the Sky in 2019, and said it was his dream to lead a team like this.

"The world is a little bit unfair to us in the way we're represented and the way we're looked at and the chances that we don't get," Wade said. "You always have to protect yourself at all times. You get proud of these moments, but sometimes I have to act like that I'm supposed to be here, even though life has told me that I'm not.

"It means a lot. It means a lot that my son is here and he gets to see his daddy coaching in front of a lot of fans just cheering."

Vandersloot recalled a conversation she had with Parker when both were overseas a few years ago and the Sky were looking for a new coach. Parker recommended Wade, who she had gotten to know when she was in Russia and he was a coach there.

"He just saw the game," Parker said. "I just felt like the way that they play, that's like the perfect coach for them."

That's when the Sky were still "they" to Parker. But Chicago became "we" to her earlier this year, as her free-agent move paid off splendidly.

"I don't think you can write it better than that," Vandersloot said of the convergence of Parker, Wade and a Sky franchise that finally had the right pieces. "But it all happened. We all bought in. We all believed in each other." 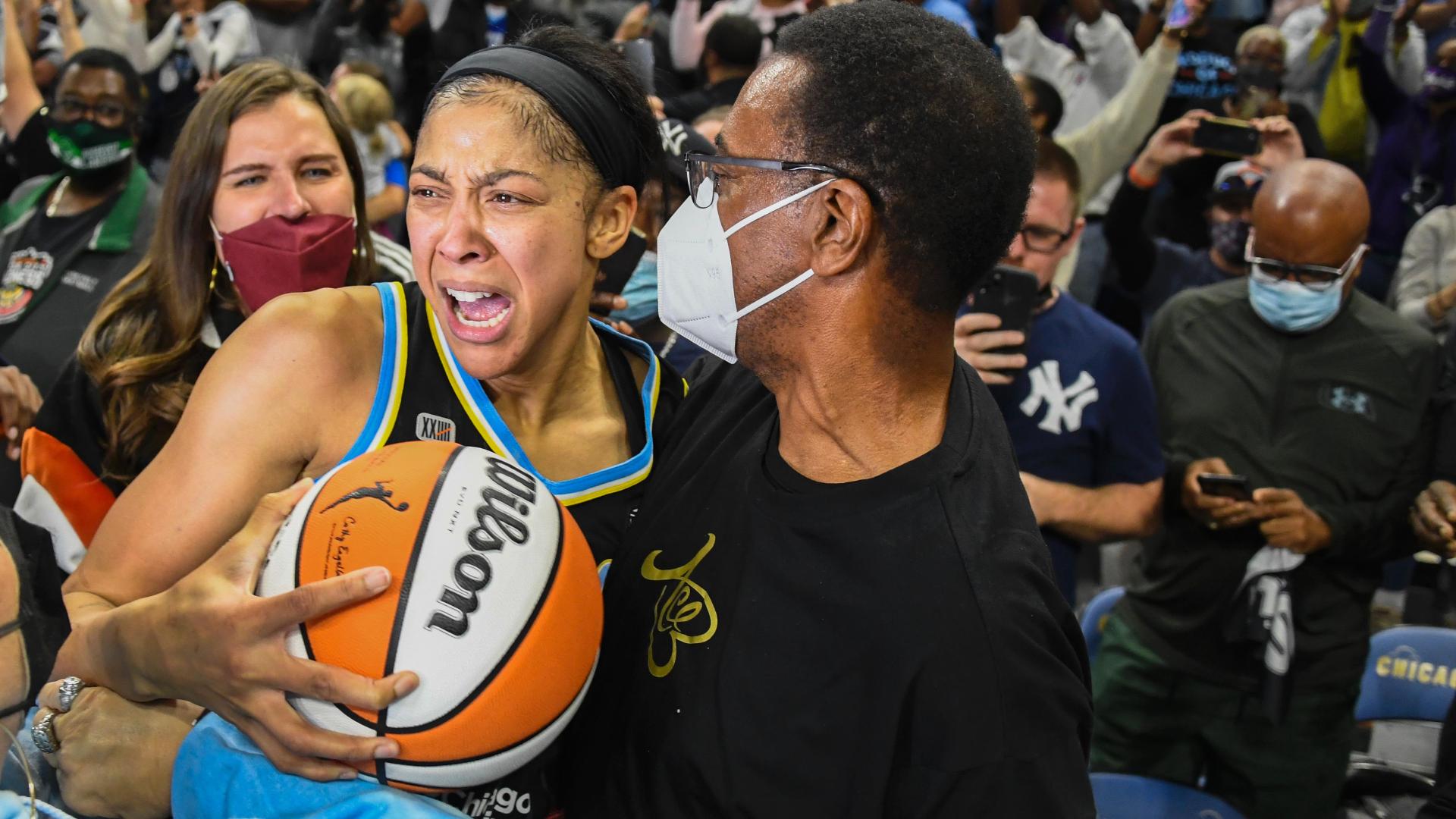