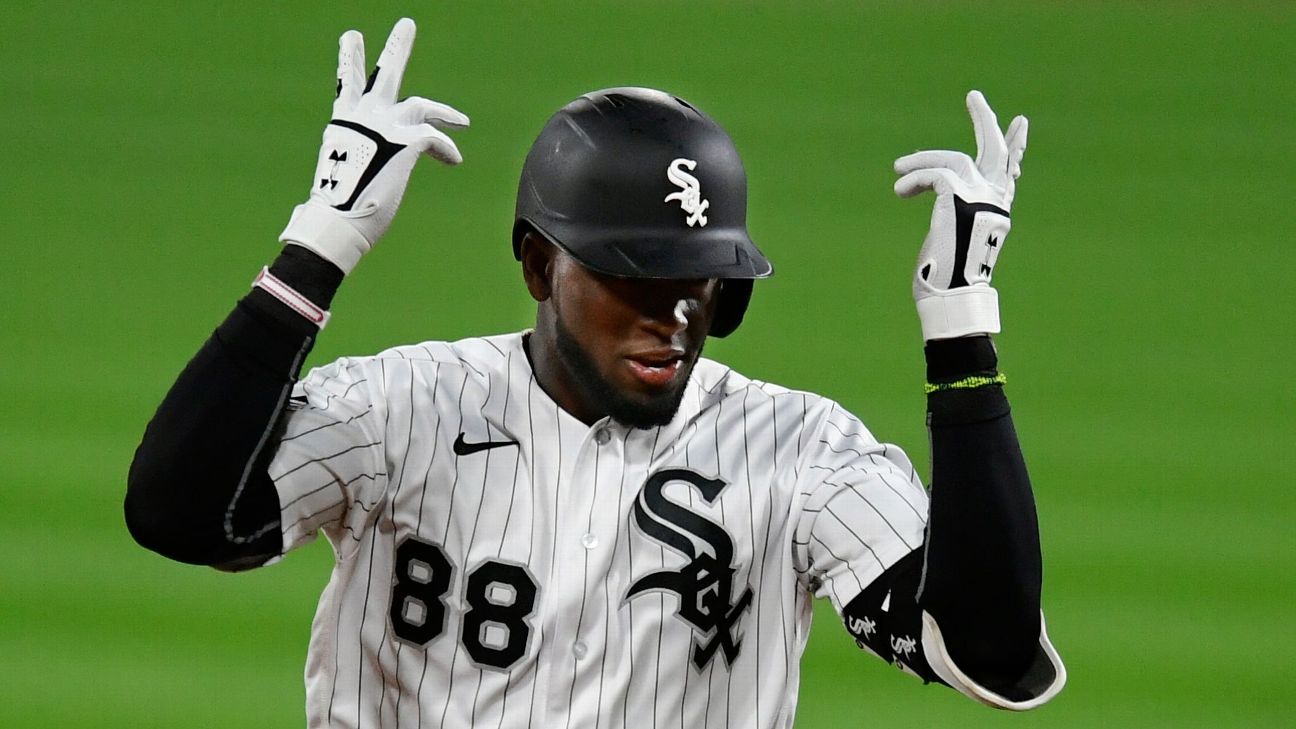 Entering this season, the consensus pick to be American League Rookie of the Year was Chicago White Sox outfielder Luis Robert, and the 23-year-old from Cuba has not disappointed. Robert has dazzled with his power at the plate and his speed in center field.

ESPN's Marly Rivera chatted with Robert about his Cuban roots, the support of having three countrymen on the White Sox and the unusual circumstances of having his rookie season during the coronavirus pandemic.


Where does your love of baseball come from?

Obviously, it's difficult because of the situation in Cuba, but was there an NBA player or team that you liked?

I really didn't. As you said, it's hard in Cuba because we never get to watch NBA games. But you heard nothing except Jordan, Jordan, Jordan ...

Were you always an outfielder?

When I started as a kid, I always played shortstop. I liked it there. I always had good range. I had good hands, but it was a bit tricky for me to throw in the infield. So I already had the size and the speed, and they decided to try me out in the outfield. When they saw me running, and that I caught every ball, they left me there.

You can't compare the economics, but when it comes to field play, what do you believe is the main difference between playing in Cuba and in the United States?

The level of talent and play is much higher here. But in Cuba, we play baseball with a lot of passion; it's pretty intense. But the quality of play is much better [in the United States].

Adapting to major league pitching is always the hardest thing to do. Has it been like that for you?

Of course. Last year, I played all levels throughout the minors, and it doesn't compare with the level of pitching here in the majors.

What has helped you adapt so well?

I think being invited to spring training the last couple of years helped me in terms of watching big league pitching. And having such a good year last year helped my mindset a lot. This year it also helped that I did well in spring training.

How did you prepare during the hiatus?


I have a hitting cage at home [in Tampa, Florida], but I didn't have a gym. So I worked out in the garage. I have an exercise bench and some weights, and I would do stairs and things like that. I didn't do many workouts because when they opened the gym back up, you couldn't really go because of the coronavirus. But in terms of hitting, I tried to stay sharp using the cage at home. I have a tee, and I also have a friend, Ariel Ricardo, who would throw BP. He was a pitcher in Cuba and played in the National Series for four years.

You never had access to video or scouting reports in Cuba. How much did you use them last year? Have you missed them?

It is an advantage to know what a pitcher's best pitch is and what pitch he tends to throw in certain counts. That's something that helps so much. In Cuba, you'd get this kind of report, "This pitcher throws this pitch and this pitch," and that's it! But not having it this year hasn't affected me much because I didn't have it my entire life. I have heard from other players who have been here for many years that feel uncomfortable not having access to video because they adapted to a routine that included watching video for seven or eight years, and now they don't have access to it. But for me, it's the same because I never had it anyway.

Did the White Sox's historic commitment to Cuban players influence your decision to sign with the team? How has it been a benefit to you to have three Cuban teammates?

Yes, when I was about to sign, I tried out for six teams. Three of them expressed the most interest; I think they were Cincinnati, Oakland and the White Sox. When they asked me, "Out of these three teams, which one do you like the most?" I told them the White Sox because Pito [Jose Abreu] was already there, [Yoan] Moncadawas there and I played with him. Words fail me in describing how much they have helped me since I got here in 2018. They have always been there for me. Pito would head to the gym and he'd tell me ... let's go to the gym ... let's go hit ... let's take a dip. He has always been guiding me in everything that I have had to do, and that has helped me so much.

What has been the most important adjustment that Pito has taught you?

Off the field, Pito has taught me that you always have to be professional and arrive early. And on the field, he always tells me that every day is a new day. Whatever happens in a particular day, the next day you have to come with the same drive to do your routine. If you do the work, you'll get results sooner than later. Having Pito here on this team has been the best. He's always helping me. Whenever he sees me doing something that is wrong or something that is not well done, he always tells it like it is. He's incredible.

I know you were in the stands for the historic game when the Rays played against the Cuban national team at the Estadio Nacional. What was that experience like for you?

That day, I was in the stands, and I felt as if I was playing there myself. They set up the stadium as if it were a major league stadium, and to see major leaguers playing there for the first time in my life was very emotional and made me want to be one of them too. The first time you see guys that play in the majors, your mind goes wild and you start dreaming of being one of them too.

What aspect of your game do you take the most pride in?

What was it like to make your much-anticipated major league debut without fans in the stands?

I never played a game without fans in my whole life. Not even in Cuba had that ever happened -- playing baseball without anyone there. I think you always need that pressure from the fans. It feels strange when you get an important hit for your team and there is no cheering or fanfare coming from the stands. But hey, this is what we have to do at this time, and we have to adapt to it.

Do you think one day we will have a unified Cuban national team?


That is what every single Cuban who has come to the U.S. wants, to represent Cuba. I think it will be very difficult. But hopefully, yes.

I know it's very hard to put into words after all that Cuban defectors go through, but is there any way you can explain what making it to the majors means to you?

This moment is a product of a lot of sacrifice, especially the last four years since I made the decision to leave Cuba. It still seems like a dream to me when I was at spring training and now being in the major leagues. Being here in the majors is incredible, seeing players playing next to you whom you only saw on television. Sometimes I still don't believe it's true.

Is there a specific player that you said to yourself, "I can't believe I'm playing next to so-and-so"?

When I saw Miguel Cabrera, I told myself, "It can't be. I can't believe it." I caught a fly ball from Miguel Cabrera. That's just incredible.

Did you set specific goals or benchmarks for yourself for your rookie year?

This year, my goal is still to stay healthy and to try to play in every game this season so that, regardless of the outcome, I can learn and improve -- and next year I can be even better.

What was it like being part of that historic moment in which you had four Cuban-born players hitting consecutively in the lineup?

That was an incredible moment. I hadn't had a Cuban hitting behind me or in front of me in the lineup in a long while. It's amazing to just know that you not only have three other Cubans playing alongside you, they're also great ballplayers. We knew it could happen, but it hadn't crossed my mind. Once we saw four Cubans in a row, hitting 1-2-3-4, we said we were going to go back-to-back-to-back-to-back, but hey, it didn't happen.

But your team did hit four straight homers on Sunday. And that included the first-ever three straight home runs by Cuban-born players, with Moncada, Yasmani Grandal and Abreu. What was it like to witness that historic moment?

When Moncada hit it out, we didn't think about it. We saw it as something normal. When Grandal hit it out, as well, that got everyone started in the dugout saying that [Abreu] was going to hit one out too. Everyone went crazy when it actually happened. I was just so proud and excited for all of them.

Do you ever talk about being four Cubans who dreamed of playing in the majors, and now you're not only here but you're making history while on the same team?

We talk about it a lot. Sometimes the four of us sit down and say, "It's incredible. When we were in Cuba, what we used to do was dream about this, and now we are all here together." We are blessed, and it makes no sense to be angry or complain about anything. We just have to keep working so we can continue performing well for our team.
Report a correction or typo
Related topics:
sportsespnmlbchicago white soxluis robertdaily
Copyright © 2022 ESPN Internet Ventures. All rights reserved.
TOP STORIES
Heavy lake-effect snow pummels parts of Chicago area | Live Radar
Boy, 11, charged in armed Chicago carjacking caught on video
10 injured when bridge collapses in PA; human chain formed to help
Stolen: The Unsolved Theft of a $3,000,000 Violin | Watch Trailer
Lincoln Park HS students post video on races they'd never date
99 license plate reading cameras installed on Dan Ryan, ISP says
How many times can I reuse my N95 mask?
Show More
Decades after TV anchor disappears, convicted rapist denies connection
Roz Varon's Weekender Report
Thieves smash window of State Street Macy's
Woman speaks out after falling for virtual kidnapping scam
Man charged with stabbing girlfriend to death in front of her friends
More TOP STORIES News