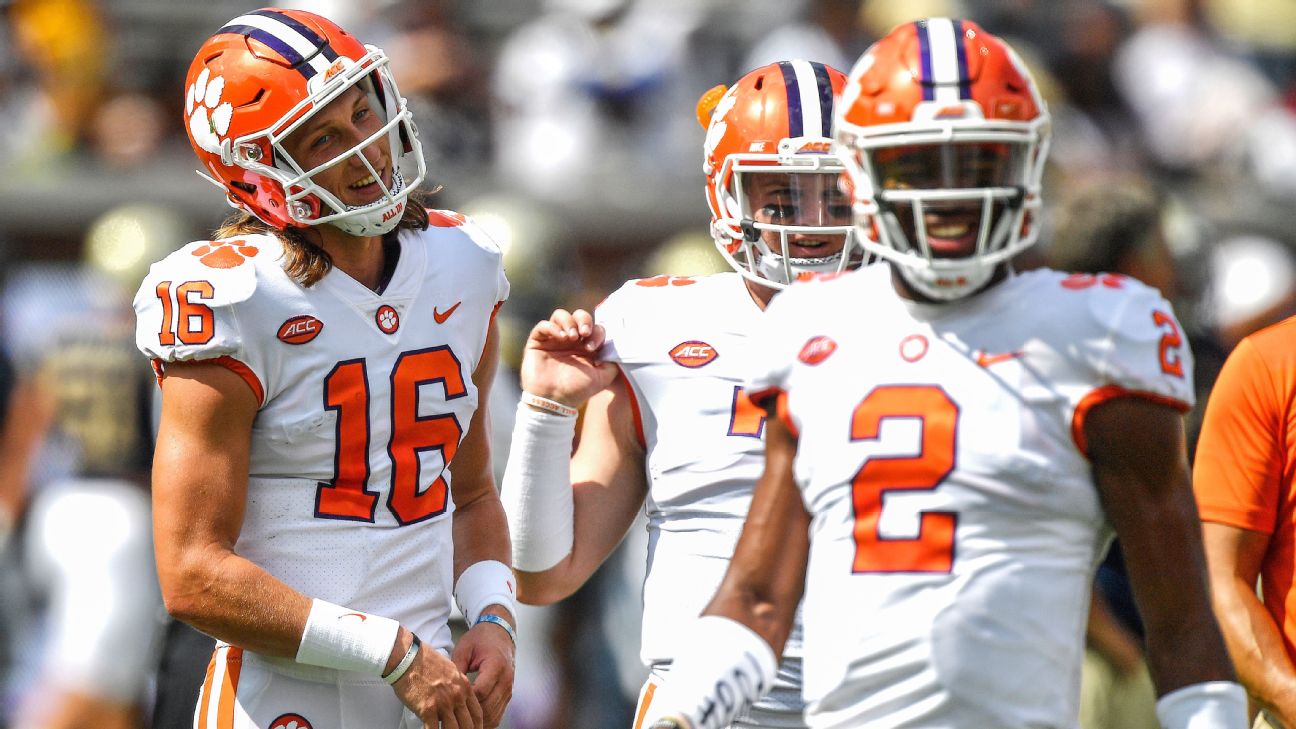 ESPN
By Mark Schlabach
For more than a half-century, nearly every one of college football's national champions had one key ingredient in common: consistency at quarterback from start to finish.

"Those guys have the ball in their hands on every snap," former Oklahoma coach Barry Switzer said. "In today's game, they're 90 percent of the offense. With the quarterbacks throwing the football and running it as much as they do, they're the most important player on the field. That's why they get to win the Heisman."

Whether it was Texas' Vince Young, Auburn's Cam Newton or Florida's Tim Tebow, national title-winning teams typically had the same voice in the huddle from season's beginning to end.

There, of course, have been notable exceptions, all due to injuries.

In 1985, after Oklahoma starter Troy Aikman broke his ankle in the fourth game, Switzer turned to Jamelle Holieway, who became the first true freshman QB to lead his team to a national title. At Nebraska in 1994, Tommie Frazier missed much of the season with a blood clot and Brooks Berringer held course until Frazier could return to give Tom Osborne his first national championship with a 24-17 victory over Miami in the Orange Bowl.

And in 2014, Ohio State survived the loss of Braxton Miller and J.T. Barrett as Cardale Jones led the Buckeyes to victories over Wisconsin in the Big Ten title game and then Alabama and Oregon in the debut of the College Football Playoff.

But last season, Alabama coach Nick Saban made a bold move, famously changing quarterbacks at halftime of the CFP National Championship, not because of an injury to starter Jalen Hurts but instead in search of a spark. Freshman Tua Tagovailoa led the Crimson Tide to a 26-23 victory over Georgia in overtime.

But few, if any, national championship teams in the sport's modern era did what both No. 2 Clemson and No. 3 Notre Dame are trying to do this season.

The Tigers and Fighting Irish, who meet in Saturday's CFP semifinal at the Goodyear Cotton Bowl Classic (4 p.m. ET, ESPN), are attempting to win a national championship after benching their starting quarterbacks for ineffectiveness during the regular season.

"Coaches make decisions based on what's best for their teams," Switzer said. "What's the best decision to make their teams win? Obviously, they felt like that was the right decision. In this case, it's worked out for both of them."

When Clemson and Notre Dame decided to promote their backup quarterbacks in late September, their decisions were not completely unexpected.

Kelly Bryant went 16-2 as Clemson's starter and led the Tigers to a playoff berth in his first season as a starter in 2017. But his backup, true freshman Trevor Lawrence of Cartersville, Georgia, was ranked the No. 2 overall recruit in the 2018 ESPN 300. Lawrence enrolled at Clemson in January and seemed to be running neck-and-neck with Bryant coming out of preseason camp.

After Clemson's offense sputtered in a 28-26 victory at Texas A&M in the Tigers' second game and then early in a road game at Georgia Tech two weeks later, the writing seemed to be on the wall. With Bryant guiding the offense, the Tigers punted on their first two possessions against the Yellow Jackets. Lawrence threw for a 17-yard touchdown on his first drive and a 53-yard touchdown on the second.

"I didn't know how it was going to turn out, but after four games, after that Georgia Tech game, it was obvious that Trevor was the better player," Clemson coach Dabo Swinney said. "And it's hard, but that's our job. At the end of the day, it's to position our team to have the best possible chance to win."

Bryant didn't play for the Tigers again. He took advantage of the NCAA's new four-game redshirt rule and left the team. He announced earlier this month that he's transferring to Missouri, where he'll have one season of eligibility remaining.

"I didn't anticipate that Kelly would leave, but that was the decision he made," Swinney said. "So we had to move forward."

With Lawrence leading the offense, the Tigers have scored 590 points this season, more than any other team in school history. They're also averaging 529.8 yards of offense per game, another school single-season record, and they've scored 40 points or more in six of Lawrence's nine starts.

"Trevor has done an amazing job," Swinney said. "We've scored more touchdowns than ever in school history, and he's been a big reason for that. So all we can do is play the best player."

That's the same mindset Notre Dame coach Brian Kelly had when he switched quarterbacks in the fourth game. Senior Brandon Wimbush started the first three before Kelly and offensive coordinator Chip Long decided to replace him with junior Ian Book.

The Irish opened the season with an impressive 24-17 victory over Michigan, but then slogged through closer-than-expected wins over Ball State and Vanderbilt.

"I think each [quarterback change] is different," Kelly said. "We looked at not only wins and losses, but I looked at in particular how it is affecting our entire football team. I think I made this pretty clear a number of times: We were playing too many snaps on defense."

Wimbush threw four interceptions with one touchdown in the first three games, and Notre Dame's offense struggled to stay on the field, converting only 36 percent of its third-down plays. In a 24-16 win over Ball State, the Irish ran 72 offensive plays to the Cardinals' 97.

"Certainly, when you make a decision that's that difficult, you're doing it not just at the quarterback position but for your entire program," Kelly said. "And Brandon Wimbush, he won 11 games for us. So it's never easy when you're pulling a guy out and he was undefeated at the time.

Book, from El Dorado Hills, California, came off the bench to throw two fourth-quarter touchdown passes in a 21-17 win over LSU in the Citrus Bowl last season. Like Lawrence, he'd lost a close quarterback competition during preseason camp. Book didn't play in the first two games and attempted three passes in the third.

Once the Irish offense sputtered in back-to-back games, Long decided a change needed to be made, and he believed a road trip to Wake Forest was the most opportune time to do it.

"We were going to play a team that plays a zone, and there were going to be a lot of wide-open people," Long said. "We just didn't want to go through that game not hitting those guys. We wanted to have practice where kids came to practice and wanted to practice. ... We wanted to get our guys like [receivers] Chase Claypool and Miles Boykin where their development is coming forward. It was more about the other 10 and their development than just the one. That was the big reason."

Book threw for 325 yards with two scores in a 56-27 win at Wake Forest in his first start this season. He completed better than 70 percent of his passes while winning each of his first five starts; he is the first FBS quarterback to accomplish that feat since Wisconsin's Russell Wilson in 2011.

"It got to the point where we needed to start scoring points," Long said. "We had too much talent not to be scoring a lot of points."

Notre Dame's offense went from averaging 23.3 points to 37.2 over its final nine games.

Long said the Irish also had to alter the way they played on offense after losing star offensive linemen Quenton Nelson and Mike McGlinchey to the NFL draft. Tailback Dexter Williams, who ended up rushing for 941 yards with 12 touchdowns this season, was suspended the first four games for an undisclosed violation.

"We needed a triggerman to get the ball out there and make the defense have to defend the entire field and not just the run game," Long said. "We didn't have Quenton Nelson, Mike McGlinchey or [former tailback] Josh Adams to be able to rip and take care of certain things. We needed everybody to be involved."

Unlike Bryant, Wimbush elected to stick around for the rest of the season. When a rib injury sidelined Book for the Florida State game Nov. 10, Wimbush started and threw for three touchdowns in a 42-13 rout of the Seminoles on senior night.

Sources told ESPN earlier this week that Wimbush intends to transfer after this season. Because he has completed his degree at Notre Dame, he'll be eligible to play at another FBS program in 2019.

"One of the reasons why we handled it so well is because we kept emotion out of it," Boykin said. "We understand that, in playing the game, our goal is to win a national championship, and we're going to do whatever it takes. As a receiver, our approach didn't change one bit.

Swinney echoed that big-picture mentality about simply focusing on the end result.

"Sometimes that's tough because you have personal feelings for a lot of these guys as individuals, and they all work so hard. But at the end of the day, you got to do what's best for the team."

On Saturday, two quarterbacks who started the season on the bench will try to move their teams a step closer to a national championship.