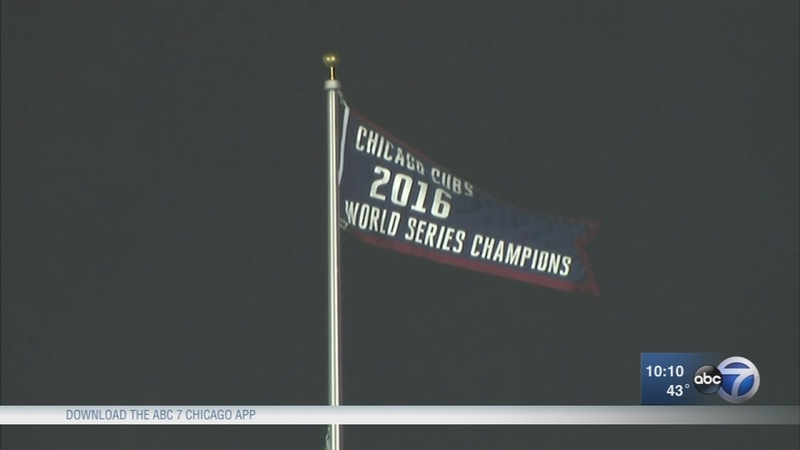 Cubs game delayed due to rain

CHICAGO (WLS) -- The Cubs home opener and a pregame ceremony to raise the World Series championship banner Monday night was delayed for about two hours due to weather.

At about 8:30 p.m., the banner was raised and then Anthony Rizzo led his teammates onto the field holding the World Series trophy, then handing it back to Cubs owner Tom Ricketts who paused on the field briefly to hold it above his head as the crowd cheered.

Ricketts, along with siblings and co-owners Laura and Todd Ricketts, simultaneously threw out the first pitches.

Jon Lester started for the Cubs against Alex Wood of the Los Angeles Dodgers.

Fans were thrilled to kick off the season after the team's World Series win in November. There will be some changes at Wrigley, notably higher ticket prices and heightened security around Wrigley, but fans are confident one thing won't change: the team's winning ways.

The Cubs just finished up a series with the Brewers, winning the last two games. Fans feel good about the team and good about this baseball season.

"We are hoping for a repeat, we'll see how things go, but it think we've got the team behind us and the staff and the coaching and everything i think we've got a good shot," said fan Christy Simpson.

Despite the rain, fans arrived at Wrigley Field early to kick off the new season and check out the new Park at Wrigley, a new plaza along Clark Street just outside the Friendly Confines. The plaza opened Monday morning.

"It's really nice, they've made a lot of good improvements for this whole year so far," said Cubs fan Rachel Perez.

There are tons of new places to sit, you can watch on a new big screen, have a drink, enter the ballpark through a brand new gate, and shop at a two-level official Cubs store.

"It's an 8,400 square foot, two-story Cubs store, so there has been incredible demand for everything Cubs and so we are trying to fill that demand for our fans with a lot of merchandise," said Colin Faulkner, Cubs sales and marketing senior vice president.

The Chicago Cubs cut the ribbon on a brand-new plaza at Wrigley Field.

Cubs owner Tom Ricketts talked about the start of a new season.

Fans can enjoy the Park at Wrigley until the afternoon, when it will be open only to ticket holders.

"We're disappointed because only fans with tickets around 3 o'clock will be able to get to this park, so we have to clear the entire park, kick everybody out and then check tickets to make sure people can get in and it's unfortunate. There are some local political forces at play in this ward. We are thankful that the mayor has been very helpful but we are not really happy about how this park is going to operate," Cubs spokesman Julian Green.

As the Cubs play their first game of 2017 at Wrigley Field, fans will get to sample plenty of new food options.

Inside the ballpark, there are new food options too, as a new kitchen was built and more gourmet options are available including gourmet hot dogs, burgers and sandwiches.

"We want to bring restaurant quality food to the ballpark, so we wanted to put a twist on some of the classics," said Cubs executive chef David Burns.

Items include a Chicago hot dog with a toasted New England-style bun; chicken al-pastor tacos with chilis, pickled red onions, radishes queso fresco and cilantro and the aloha chicken breast, which is a grilled chicken breast with roasted pineapple, broccoli sauce on a toasted Hawaiian bun.

Clark the Cub is excited for the Cubs home opener.

GETTING INTO THE GAME

For the first time, fans can leave those paper tickets behind and use the new app and scan their phones to get into the ballpark.

Fans are encouraged to arrive early to allow time to pass through security. For more information on the screening process at Wrigley, visit www.cubs.com/security.

Trucks will be forbidden from traveling on the roads surrounding Wrigley Field from two hours before Monday's game until one hour after and it's possible police will close down entire blocks of Addison and Clark, depending on their assessment of the crowds.

Beginning at noon Monday, seven hours before first pitch, cars parked along these streets will be ticketed and towed.

The Cubs Hotline will be operated one hour before the game until two hours after and people can call 1-866-427-3869 to report parking violations or other quality of life issues.

There will be heightened security at Wrigley and fans are asked to have identification available to be presented to law enforcement upon request.

Surge pricing will also be in effect, with meter rates rising to $4 per hour every hour on the event day beginning two hours before the game starts and continuing for another seven hours.

Cubs fans were gearing up Monday afternoon for the team's home opener.

Chicago Cubs fans are gearing up for the defending champs to take the field at Wrigley.