Joel Quenneville on the Panthers' Cup aspirations, his Blackhawks exit and the shot-skis video 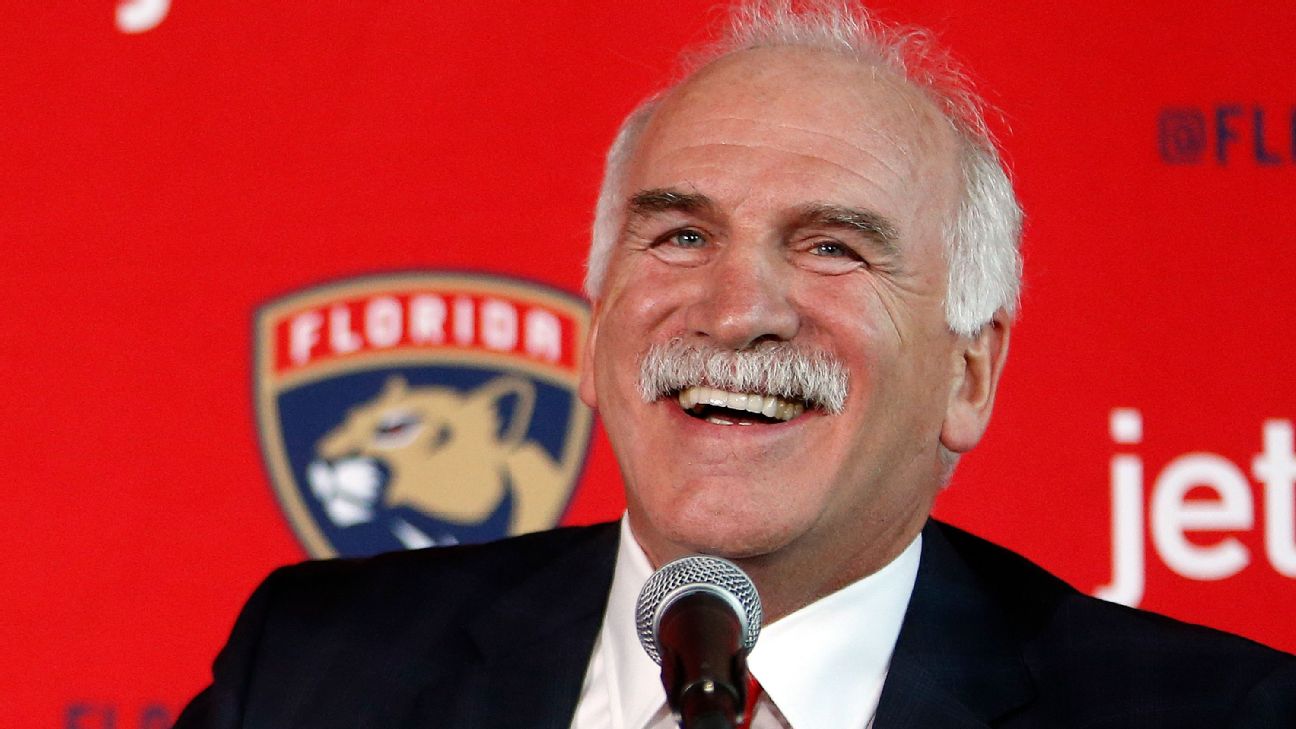 ESPN
By Emily Kaplan and Greg Wyshynski
After three Stanley Cups and a decade of dominance, it's easy to forget that the Chicago Blackhawks looked very much like the current Florida Panthers when then-GM Dale Tallon hired Joel Quenneville as his coach in 2008.

The Blackhawks had a collection of young stars who weren't quite yet sure how to win in the NHL. As an organization, they had one playoff appearance in 10 seasons. Quenneville took over for Denis Savard after just four games of the 2008-09 season. By the end of it, the Blackhawks were playing in the conference final.

Can Quenneville have that kind of transformative effect on the Panthers, after reuniting with Tallon this week on a multiyear contract worth around $6 million annually as Florida's new head coach? He believes there are similarities between his old team and his new team.

We spoke with Quenneville this week on the ESPN On Ice podcast, to ask about his past and his future. But first we asked about his time away from the NHL after being fired by the Blackhawks just 15 games into the season -- in particular about some now-infamous photos and video of him tailgating.

ESPN: Back in Chicago, it felt like for a good month this winter all anyone wanted to talk about was you ripping shot-skis with Bears fans at Solider Field.

Joel Quenneville: OK, I want to straighten it out. When you've had one shot, it's like you had a million. I only had one shot. It was a perfect night. Everybody had a good time. It was a good game.

Hey, you got a life. You got a family. It's almost like when I look back at the other times I was let go, there was a lot of bitterness towards the organization. It's one of the drawbacks in our business: job security. But this was a situation where I got a lot more family time than I've seen. A lot of family trips, a lot of different things. Got away from the game a little bit.

And now we're excited about doing it for real again, and doing what it takes to win a championship. We've got the right ingredients, and now we just have to put it together.

ESPN: You mentioned that the chance to work with Dale Tallon again was a major factor in bringing you to the Panthers. Can you talk about that relationship and how important it is for you to have a solid relationship with your general manager?

Quenneville: I watched a lot of hockey games this year. I got away from the game, and once you do that you start looking at players and teams. My motivation when I left the game was that I wanted to win a Cup and be around good people. And Dale is one of those guys. When I look back and think about when he hired me in Chicago ... there are a lot of parallels between that team and this team. They're similar. That got us excited. Got me excited. Things developed quickly.

He's pretty excited about these players. A lot of the depth players we have are comparable to what we had in Chicago, which I was fortunate to be a part of. We feel this is a young team that is headed in the right direction. This is close to being a playoff team, when you look at what they've done the last couple of years. Pretty good records. Close, but not getting right there. That's what we're trying to get to: a playoff spot. You get there and anything can happen.

ESPN: After you were let go by Chicago, you became the belle of the ball. Everyone that had a coaching vacancy was seemingly interested. How far down the road did you get with other teams like the Flyers or Sabres before deciding on Florida? Or was the target always going to be the Panthers?

Quenneville: In this business, you're not sure what's going to happen next or the timing on it or the opportunity. But it was unanimous across our family where we wanted to go. We all wanted to be in South Florida. When we looked for an opportunity to win, the situation with Dale in South Florida was a perfect fit. We're extremely happy. We feel like we did the right thing.

ESPN: You said you were able to watch hockey from a different vantage point. Was there anything you saw in the last year that's going to potentially make you a different coach next year?

Quenneville: A good question. You know, when you don't have any skin in the game, you watch players. I watched players from a certain skill point of view. Guys where you're like, "Geez, I'd like to coach that guy." You look at all the little details, and what can be improved. You watch. You observe. And hopefully you learn a bit more about players, how we can tighten it up a little bit more, here.

When the playoffs begin, you get to watch some series. You get to watch both players and system. This is what we play for all season, and get to enjoy. I'm going to look forward to this playoff run here, and hopefully next year we can be one of them.

ESPN: You've mentioned similarities between this Panthers team and the Blackhawks team you took over as head coach in 2008. Obviously one that people make all the time is Aleksander Barkov as the new Jonathan Toews. But is there also a psychological comparison? Like teams with talent that just haven't figured out how to win yet?

Quenneville: You look back at the last two years, they're only a couple of wins away from being in the playoffs. This team has a lot of young guys that are looking to get better, looking to be on that next level as a top player. I've found that the more top players you have, the more the players around them get better as well.

We need to capture that type of an appetite around here. When you're pushing one another, like when I look back at Johnny and [Patrick Kane], I see a lot of guys here that look like they have that ability, and guys that aren't even in the lineup that you can be excited about. That's where it's at right now. The push has to be that "We want to get in. We want to be a playoff team." So let's spend the summer training like we never have [before]. It's a real goal. This team needs to play in the playoffs.

ESPN: What's the plan for the summer in getting to know the guys?

Quenneville: We'll get to talk to everybody here. Organizationally, we're talking a lot about the team, getting more familiar with everyone. We have to put together a coaching staff here together as well. These steps will be taken. I got a chance to see everybody this week, a lot of faces I look forward to getting familiar with. There are a lot of players here with the ability to be something special.

ESPN: We imagine they gave you a good idea of what the offseason plans are for the Florida Panthers when you were hired. While we're not going to get into specifics ... do you think your presence there might be a way to attract some of the big-name free agents that are expected to hit the market this summer?

Quenneville: I don't know about that. I know we're definitely looking to improve. When you go into the free-agent market, it's a competitive world, over the last few years. And when you go into those situations, you want to make sure you're making the best decisions possible. But it's an attractive place. I think there's a lot to be excited about coming here. So we'll see how that plays out in the market. Sometimes you don't know what you're going to get.

ESPN: What's the better recruiting pitch: playing with Sasha Barkov or living by the beach?

Quenneville: It could be a daily double there. [Laughs]

ESPN: Last question: You coached Chris Pronger in his mid-20s with the St. Louis Blues, and now he's an executive in Florida. What's your relationship with him these days, and have you spoken to him since taking this gig?

Quenneville: I talked to Prongs and look forward to talking with him more. The first thing I said to him was, "Prongs ... you think you can still play?"

But he's one of those players I was privileged to coach, like Toews and Kane. These guys make the coaching staff as good as they can possibly be. Having a guy like that on the ice for at least half the game makes you look a lot smarter. [Pronger] has a great opinion of the game, sees the game like nobody else did. I look forward to talking with him as we go along here.