Looking ahead to the Jeremy Colliton-era Chicago Blackhawks 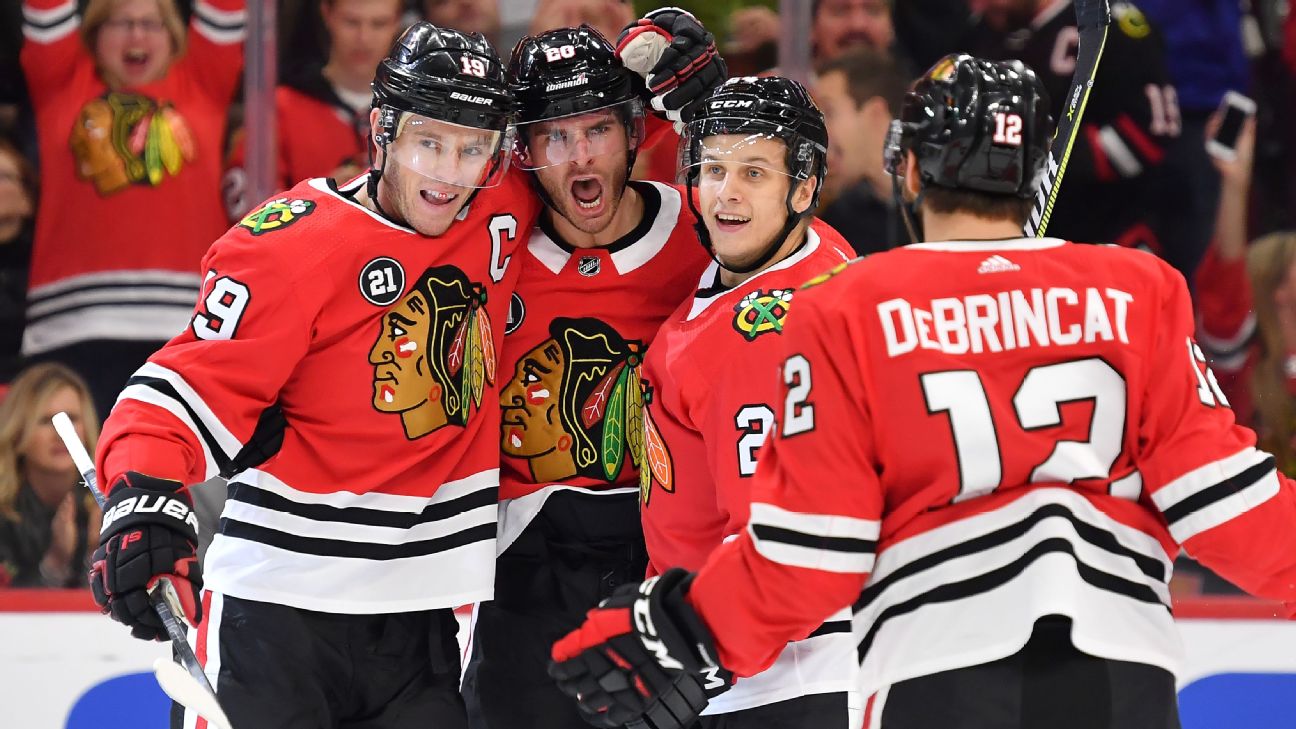 ESPN
By Emily Kaplan
CHICAGO -- Here's what we know about new Chicago Blackhawks coach Jeremy Colliton: He's 33 years old and was selected in the 2003 NHL draft, the same class as Chicago defenseman Brent Seabrook. Actually, the two know each other quite well: Colliton played in a summer league with Seabrook when they were 11.

"We sort of followed the same career path," Seabrook said. They played in the Western Hockey League against each other and were teammates for Team Canada on two World Juniors teams. Afterward is where their careers diverged.

While Seabrook was taken No. 14 overall by the Blackhawks and has now skated in 1,019 NHL games and counting, Colliton was drafted in the second round by the New York Islanders, but played in only 57 NHL games over five seasons. He struggled to latch onto a team after the 2012-13 lockout and signed with Mora IK in Sweden. Colliton played only three games before retiring, still feeling effects of post-concussion syndrome. He transitioned into coaching, staying in Sweden.

The Blackhawks became enamored with Colliton and hired him to coach their AHL team before last season. Here's what else we know about Colliton: He and his wife just welcomed a new daughter on Thursday, five days before his NHL appointment. (The couple also has two sons). We know that Colliton was known in Rockford as being a great communicator. We know GM Stan Bowman and team president John McDonough think highly of him. But in a nearly 40-minute introductory news conference during which Colliton sat beside his bosses and team owner Rocky Wirtz, we didn't learn much about the man tasked with succeeding Joel Quenneville, the NHL's second-winningest coach of all time.

Colliton only briefly referenced his notes, a page from a spiral notebook. He was soft-spoken, if not deferential. The youngest coach in the NHL will be a mystery to many, and his impact on the team remains to be seen. In the meantime, here's everything we know about the state of the Blackhawks, including the important questions that need to be explored.

Parting with Quenneville was never going to be easy, but the veterans who won three Stanley Cups with the coach took the firing especially hard.

"Definite shock," captain Jonathan Toews said. "I didn't think there was going to be a change for a while."

The Blackhawks got off to a quick start but earned only one of their last possible 10 points, including a winless Western Canada road swing immediately before the firing.

"When I first heard the news I was thinking. 'I wish I wasn't sick that game in Vancouver,'" winger Patrick Kane said. "I wish I felt good on that road trip and could have played better and something like this doesn't happen. ... Also, Duncs [Duncan Keith] got kicked out two minutes into the game in Calgary; maybe that makes the difference in the game as well. There's different things that run through your head as a player."

Quenneville, many felt, was the fall guy. "To say directly the coach is at fault is pretty rough," goalie Corey Crawford said, adding Quenneville was the coach who had faith in him from the beginning. "We just weren't performing the way we should, I guess, and in sports unfortunately the coach takes the fall first most of the time."

Blackhawks management disputed that the dreadful Western Canada swing was the sole reason for the firing, but it was certainly the impetus. Management saw a situation where the season could spiral, as Wirtz said.

Denials of a power struggle

There have been rumblings of a power struggle between the coaching staff and management for years, and Bowman especially wanted to quash any rumors.

"There's no truth to that whatsoever," the GM said. "Quite the contrary. Joel's been great to me the entire time we've been together. I would say we have a very good relationship. Do we agree on everything over 10 years? No, we don't. But we see the game very similarly and I think that's one of the reasons we were able to have as much success as we did together. So there's just no truth to that at all."

McDonough said the team didn't consider firing Quenneville last season, considering Crawford was out and the loss of Marian Hossa was significant. The team's performance -- missing the playoffs for the first time in a decade -- wasn't an indictment on Quenneville considering the hand he was dealt. Wirtz, however, seemed to hint that the group considered a change last season.

McDonough said he did not consider firing both Quenneville and Bowman, reiterating his faith in Bowman's roster construction. It should be noted that McDonough has a bigger say in hockey operations matters than most team presidents.

So why exactly does the team have so much faith in Colliton? It was clearly invested in his development, but the promotion felt rushed; Colliton was only in his second season in the AHL. Despite success -- the team made it to the Western Conference finals this past season -- it's not like he was a coveted asset the Blackhawks needed to secure before another team snatched him up.

Blackhawks management repeatedly called Collision a good communicator, and it got a bit defensive, clarifying that it wasn't saying there was a communication breakdown with Quenneville.

Young players who came through Rockford rave about the coach. Consider 26-year-old defenseman Erik Gustafsson, who had a cup of coffee with the Blackhawks last season before being sent back down. "When I got sent down last year, my confidence wasn't great," Gustafsson said. "I guess you could say I had a hard time. He talked me through it."

When asked if it was Colliton who initiated the talks or Gustafsson, the player said: "He came to me. I came to him, too. We met halfway there."

Gustafsson has since become an NHL regular, playing in 15 games this season and averaging 21 minutes per game.

"He does a good job of understanding all of his players and understanding where the team is at physically and emotionally and managing that," said John Hayden, who began with the Blackhawks but finished the season with Rockford last season. "Yes he's young, but he uses that to his advantage. He's relatable. He's not that far removed from playing in the NHL and playing pro hockey."

Bowman cited veterans Lance Bouma and Cody Franson buying into Colliton's system -- despite being disappointed they weren't on the NHL -- as a reason he thinks Colliton can lead a team with eight players who are 30 or older.

Colliton's first practice was definitely up-tempo. He seemed to use a lot of the same line combinations we've seen recently, but again, it was Day 1. Will he implement new systems? Based off his comments, don't expect anything drastic, at least not right away.

"Yeah, there'll be some things that we adjust," Colliton said. "I don't think we're going to have a huge amount of change. It's, 'Can we push on a few things, detail-wise, that can give us a little jump start?' And then once we get our hands dirty here and we know [one another] a little better and play some games, then, yeah, things are going to come up and we'll feel more comfortable and have a better feel for what we have to do."

The Blackhawks also fired two assistant coaches -- Kevin Dineen and Ulf Samuelsson -- and only added one: 66-year-old Barry Smith, who had been on the Blackhawks' hockey operations staff. (Smith has been an assistant coach on three teams, but was last behind an NHL bench in 2007). Bowman said he doesn't have plans to hire another assistant.

When asked how the new staff would divvy up duties -- Dineen, for example, was in charge of the power play -- Colliton said that has yet to be determined. "So we're sharing everything right now," the new coach said. "We just started. That's kind of an ongoing conversation."

More moves on the way?

The Colliton hiring certainly signals the Blackhawks are embracing their youth movement. It's only one month into the season and plenty of time to make up ground, but if the Blackhawks continue to flounder, it's fair to wonder if a big shake-up is coming. For the record, management reiterated the goal is to still win this season. When asked if he anticipates roster moves if the team stands as it is, Bowman vaguely said he's always looking for ways to improve the roster. He wasn't going to tip his hand.

But say the team still struggles -- who could be moved?

Kane is likely untouchable. At 30, he is still producing at a superstar level and shows no sign of regression. A trade of captain Toews would be shocking and might cause irrevocable harm in the locker room and among the fan base.

That leaves defensemen Seabrook and Keith. Seabrook's is the name most circulated among fans, though his cap hit (6.85 million) and term (through the 2023-24 season) make his contract almost too cumbersome to move. Any trade involving Seabrook would likely include other players. Keith ($5,538,462 million through 2022-23) is far more attractive to other teams, though the Blackhawks would demand a huge return.

Brandon Saad has struggled in his second stint, but trading him would mean Bowman admitting mistake; and just like when this issue sprouted up last season, it would entail Chicago selling low.

But after the team fired a coach who won three Stanley Cups for the franchise, it's tough to say that anything would be truly shocking at this point.

Should the Blackhawks have fired Quenneville?
The Around the Horn crew questions if the Blackhawks made the right decision to fire Joel Quenneville.
Report a correction or typo
Related topics:
sportsespnchicago blackhawkshockeynhljoel quenneville
Copyright © 2020 ESPN Internet Ventures. All rights reserved.
More Videos
From CNN Newsource affiliates
TOP STORIES