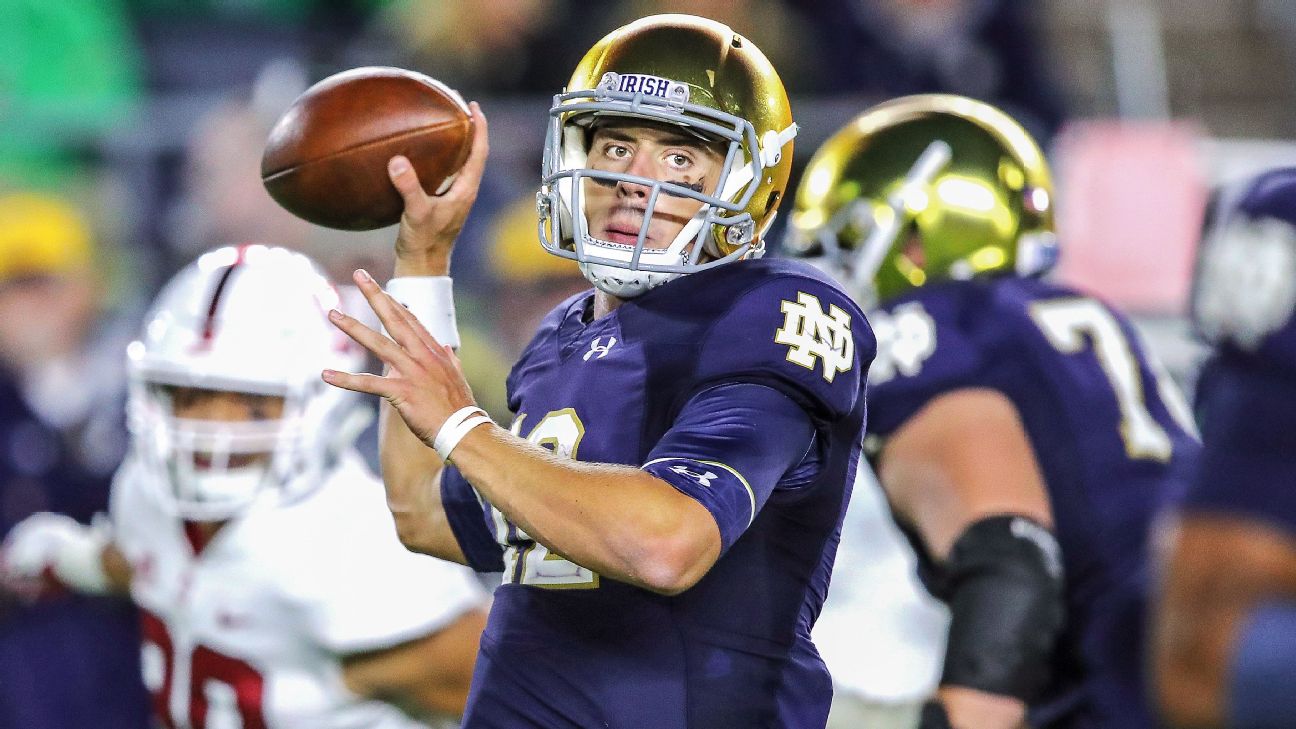 Sitting inside the visitors' locker room at AT&T Stadium on the heels of a 30-3 blowout loss this past December, Notre Dame's players and coaches said they had no doubts about the program's ability to compete for national championships in the future.

The Fighting Irish have lost by a combined 55 points in the two postseason games they've played with a title shot hanging in the balance this decade. After the first, a 42-14 loss to Alabama at the end of the 2012 season, head coach Brian Kelly said the gap between his team and winning it all felt as large as it ever had. After a Cotton Bowl loss to Clemson in December, Kelly didn't feel the same "so close, yet so far" doom. He and his players unanimously said that the foundation they built the past two seasons will make them regulars in the College Football Playoff.

Notre Dame is on a short list of schools that have hit double-digit wins in three of the past four seasons. However, the Irish's formula for success -- which doesn't include a quick-strike juggernaut offense or an abundance of future first-round draft picks -- doesn't match the teams that have become regulars in the sport's semifinals. With some rebuilding to do on defense and around returning starter Ian Book at quarterback, the 2019 Notre Dame team will go a long way toward answering whether the program has maxed out its potential or if the confidence Kelly's players exhibited at the end of 2018 was justified.

The loss of Drue Tranquill and Te'Von Coney leaves a crater of experience, skill and leadership at the center of Notre Dame's defense. That duo combined to make 209 tackles last season. They each made big plays in big moments and served as a good steadying force for the players around them. Second-year defensive coordinator Clark Lea will likely have to dedicate a good deal of spring ball to testing different combinations to try to replace Tranquil and Coney.

Sophomore Bo Bauer, junior Jordan Genmark Heath and senior Jonathan Jones will all have a chance to battle for starting roles after playing primarily on special teams to this point in their careers. Fifth-year senior Asmar Bilal started nine games in the team's rover spot last season but could slide to an inside spot given the depth behind him at that position. Sophomore Shayne Simon would have to show he's ready to take over Bilal's old job for that switch to take place. Lea has lots of options but no clear answers at linebacker yet.

Returning starters Julian Okwara and Khalid Kareem combined for 12.5 sacks on a defensive line that liked to spread the wealth in 2018. Notre Dame's defensive front has questions to answer up the middle, but its edge rushers (including Daelin Hayes, a regular member of the 2018 rotation) are fast, strong and versatile. Okwara and Kareem both could have jumped to the NFL after strong junior seasons but stand to benefit from another year of development.

The biggest loss of experience for Notre Dame this year comes on special teams, where placekicker Justin Yoon and punter Tyler Newsome are both out of eligibility. Yoon set a school record for points scored in his four seasons kicking field goals. Newsome did enough during his career to be the rare specialist named a team captain in his senior season. Bramblett, a native of Tuscaloosa, Alabama, enrolled in January, and Notre Dame is counting on him to be ready by fall. For better or worse, his freshman season will have a big impact on Notre Dame's ability to control field position.

Georgia fans turned Notre Dame Stadium black and red two years ago, when the Bulldogs visited South Bend. Notre Dame heads to Athens in late September for the second half of that home-and-home series. In retrospect, the one-point Georgia win in 2017 was the first sign that Notre Dame had remade itself after a disastrous 2016. This year's rematch against what will likely be a top-five opponent on the road will be a chance for Kelly and the Irish to prove that they can sustain their ability to compete with college football's best programs.

: Surprises at the skill positions

Notre Dame needs to replace the production of top receiver Miles Boykin(872 yards, 8 TDs) and top running back Dexter Williams(995 yards, 15 TDs). There are some obvious options with experience. Chris Finke and Chase Claypool combined for 99 catches last season, and both return. Jafar Armstrong emerged as a pleasant surprise with 245 rushing yards last September, while Williams sat out the first four games of the season but faded fast in October and November.