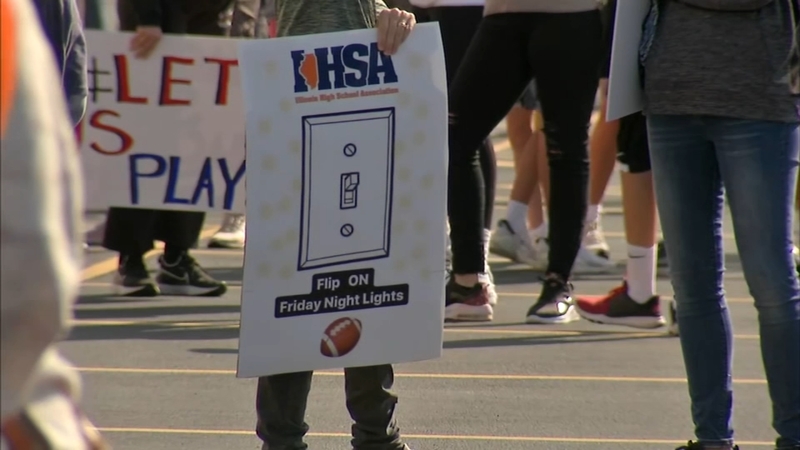 WHEATON (WLS) -- Even after the Big Ten announced Thursday that it will resume football, Governor JB Pritzker stood firm on his decision to ban contact sports this fall for schools across the state.

There was some hope that with other states moving to allow fall sports that Illinois might follow suit. Instead, the governor shut the door on that Wednesday and said it's just not safe.

Eddie Robinson was a running back for Wheaton Warrenville South High School. He was counting on this season to showcase his talents, now like many others he remains sidelined and frustrated.

"Yeah, it's my senior year, with no football or anything like that. I don't really see much after. I planned on playing football, going to school play football. But with no football I don't see much of a future with that happening," Robinson said.

Despite numerous rallies over the past week, the governor is refused to bow to political pressure to allow students-athletes to resume sports considered a high risk for transmitting COVID-19.

"Contact team sports such as football and hockey can become super spreading events very easily. Just one youth athlete showing up with the virus can start a chain reaction of spread that can quickly threaten an entire team," said Dr. Michael Lin, Infectious Disease Specialist at Rush University Medical Center.

The governor said the protocols in place for professional and college athletes put them in a different league for safety.

"These programs are operating with daily testing or in a league created bubble or with facilities that allow for outsized, social distancing, and are sanitized every day," Governor Pritzker said. "That's not what's available to the vast majority of young people who play sports in Illinois."

But many parents are concerned Illinois could be the only state in the Midwest not to have football this fall.

The governor was sympathetic, but unmoved.