Revived offense could provide the best fix for Cubs' bullpen 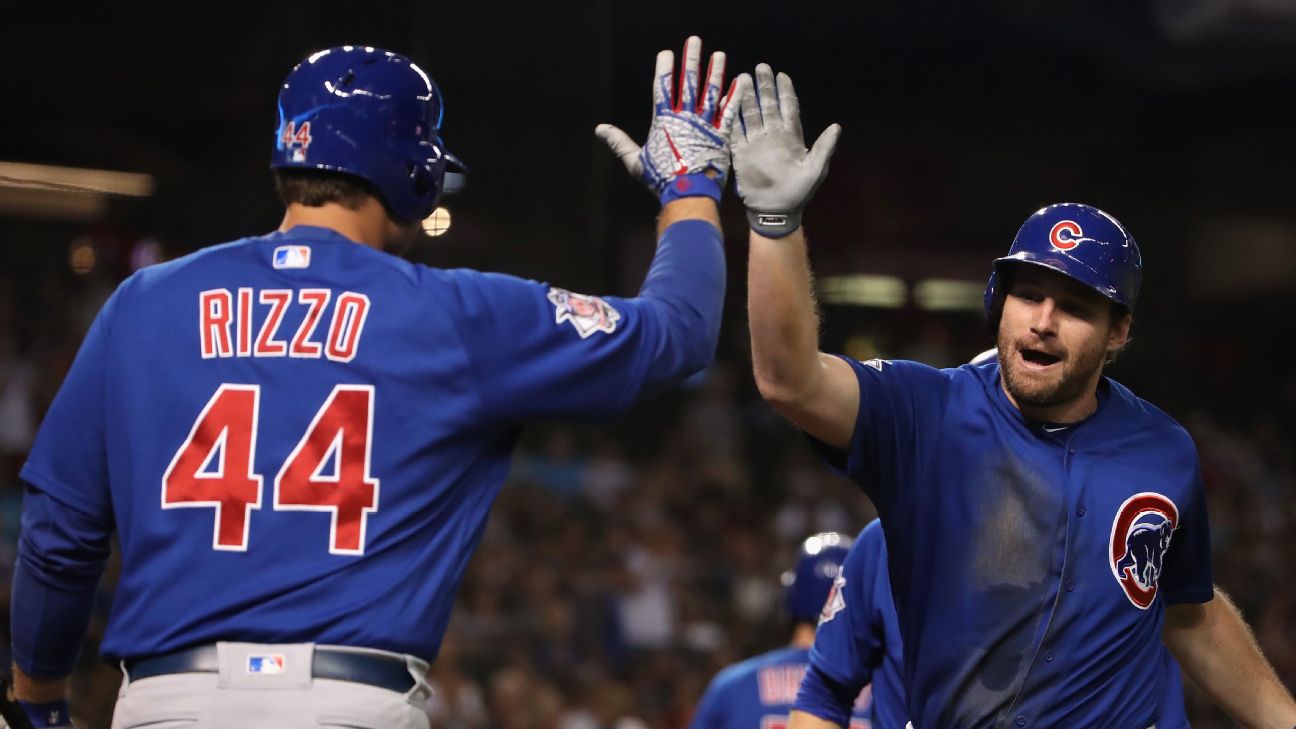 ESPN
By Jesse Rogers
PHOENIX -- Perhaps the Chicago Cubs found the secret to playing without a true closer: Dominate the opposition at the plate while taking save opportunities out of the equation. There was no need for any ninth-inning nail-biting on Tuesday, as a team in a hitting slump for much of the second half is beginning to wake up.

"We stacked them one on top of the other," second baseman Daniel Murphy said of Cubs at-bats after a 9-1 win over Arizona. "Sustained pressure on the opposing pitcher. Traffic early in innings."

The Cubs were up 5-1 after two -- thanks in part to a single and a home run by Murphy -- then added on runs later, taking some sting out of the pregame news that righty Brandon Morrow is finished for the year. The closer's nagging bone bruise in his forearm, which has sidelined him since the All-Star break, hasn't healed. Meanwhile, his backup, Pedro Strop, is also down, so the Cubs will be mixing and matching more than ever late in games.

At least, they will be in the ones that aren't blowouts. Tuesday's drama ended early, thanks to first baseman Anthony Rizzo. His 17-pitch, first-inning at-bat against Matt Andriese was a thing of a beauty. He fouled off five pitches on a 0-2 count, then six more at 2-2.

The sequence set things up for the next hitter, MVP candidate Javier Baez. Rizzo eventually made an out, but it didn't feel like one moments later, when Baez hit his 33rd home run of the season into the stands in right-center.

"When you wear pitchers out like that, it sets up the next guy and the next guy for success," Rizzo said. "We want to have that team culture to continue to do that."

That sets the Cubs up to be at their best, especially when their left-handed hitters come through. It's an October essential, as most teams -- outside the Cubs at least -- have righty starters and dominant righty bullpen arms. The platoon advantage comes in handy, and with the return of lefty Jason Heyward from a hamstring injury -- he doubled in his first at-bat this month -- the Cubs can boast a dangerous array of lefty hitters. That depth was on display Tuesday, as Murphy, Heyward, Rizzo and Ben Zobrist all contributed to the win.

"I like the fact we have a bunch of lefties," manager Joe Maddon said. "I did like our lineup a lot tonight with Jason back in there."

Maddon will have two more to choose from when Kyle Schwarber and Tommy La Stella return from minor back ailments as soon as this weekend. It's as good a time as any to begin a swarming mentality, as the Cubs are starting to see the light at the end of the tunnel. Their magic number is just eight after the second-place Milwaukee Brewers lost to the Cincinnati Reds while the Cubs were pounding the fading Arizona Diamondbacks.

"It's always nice to move in one direction and see another team move in another direction," Murphy said with a smile.

Come Thursday, most Cubs won't be moving anywhere, as it will be their first day in 31 not at a ballpark. Their grueling stretch is coming to an end on a high note, as they've already won the series against Arizona after a 5-1 win on Monday. Tuesday's Game 2 victory was even better. While Murphy had to be at the ballpark on Monday, he got the night off. It showed in his at-bats the next day.

"Joe has done a great job with all of us to get us some time," Murphy said. "I thought the entire offense was awesome. Great at-bats starting with Rizzo's at-bat in the first."

Maybe that's the answer to the Cubs' new ninth-inning question: Make it meaningless. It's doubtful that a team can do that for three rounds of the playoffs, but perhaps that's not what the Cubs need. Rather, just a break here or there will do for the guys who are filling in for Morrow and Strop. They got that break on Tuesday, as the Cubs continued to inch toward a third straight NL Central division title, thanks to an offense catching its second wind.

"Anytime anybody gets going, I feel like we're going to be dangerous," Murphy said.