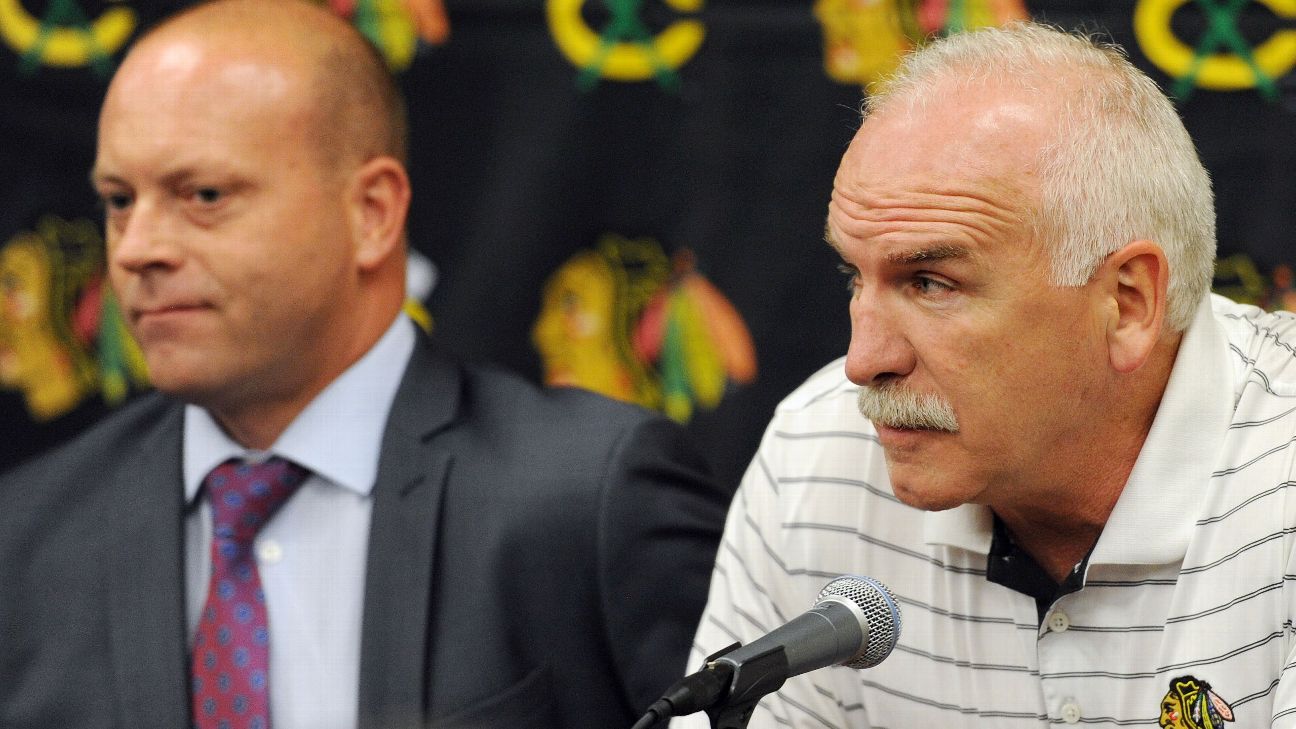 Quenneville, who won three Stanley Cups with the Blackhawks, had been with the team since 2008 and was the longest-tenured coach in the NHL. He is the second-winningest coach in NHL history, compiling 890 wins with St. Louis, Colorado and Chicago; only Scotty Bowman (1,244) has more.

Chicago promoted its AHL coach, Jeremy Colliton, 33, who becomes the youngest head coach in the NHL.

"I have a huge amount of respect for Joel," Colliton said. "Those are huge shoes to fill. I won't try to fill them. I've got to be myself. And we're different people, so I'll bring different things to the table, different ideas to the table."

Blackhawks captain Jonathan Toews said of Quenneville's firing: "Definite shock. I didn't think there was going to be a change for a while."

Many of the Blackhawks veterans thought that the move was in some ways their fault. Patrick Kane mentioned the recent winless road trip out West.

"When I first heard the news I was thinking, 'I wish I wasn't sick that game in Vancouver,'" he said. "I wish I felt good on that road trip and could have played better and something like this doesn't happen. ... Also, Duncs [Duncan Keith]got kicked out two minutes into the game in Calgary; maybe that makes the difference in the game as well. There's different things that run through your head as a player."

The front office stood united, however. Owner Rocky Wirtz released a statement saying the team parted with Quenneville with his "full support."

"As Chicago Blackhawks fans have seen over the last decade, this organization no longer shies away from making tough decisions or ones based on emotion," Wirtz's statement read. "Those days are long behind us. Of course, Joel's was difficult, as it should have been. During his tenure as head coach to the Chicago Blackhawks, Joel brought the city of Chicago and our fans three Stanley Cups and an incredible era of hockey."

That's what made it so hard to understand for many Blackhawks players.

"He's going to be an icon in Chicago for the longest time," Kane said of Quenneville.

Added veteran defenseman Brent Seabrook: "[Quenneville] means the world to me. Ten years, three Stanley Cups. What was I, 23, 24 when I came here? He taught me a lot as a young man, as a young player."

The past several seasons haven't been up to the Stanley Cup standards, however. Despite posting over 100 points in 2015-16 and 2016-17, Chicago was knocked out in the first round of the playoffs each season. Last season, the Blackhawks missed the playoffs for the first time in a decade. They were without starting goaltender Corey Crawford for most of the season.

Crawford returned this season but the Blackhawks are 6-6-3, the second-worst record in the Central Division. After a quick start, they've taken only one of a possible 10 points.

"This is certainly a very difficult decision," general manager Stan Bowman said in a statement. "But I believe it is in the best interests of the Blackhawks organization. We need to maximize each and every opportunity with our playoff goals in mind and create continued growth and development throughout our roster at the same time. After much deliberation the last several days, with great respect to what Joel has meant to the Blackhawks, we knew we had to make a change.

"Along with our appreciation for everything Joel has accomplished for our franchise, we also thank Kevin and Ulf for their many contributions and wish them success in the future."

Toews played his rookie season and the first four games of his second year under Denis Savard before the coach was fired and replaced by Quenneville. Toews had nothing but praise for Quenneville, but he said that the team has to embrace this change.

"At the end of the day, everyone has to commit to the new look and new energy in the room," he said.

Colliton was in his second season as head coach of the Rockford Ice Hogs, the top affiliate of the Blackhawks. Rockford reached its first AHL Western Conference finals last season.

Before joining the Blackhawks organization, Colliton spent four seasons as the head coach of Mora IK in Sweden.

He now takes over a team in which four players are older than him: Chris Kunitz, Cam Ward, Keith and Crawford.

"I have to earn their trust by them believing that I can help them win, that I can help them be better individually, that we as a staff can put together a plan so they can have success," Colliton said. "So if I can do that, there's no problem. It doesn't matter how old I am."

Colliton was a second-round pick (58th overall) of the New York Islanders in the 2003 NHL draft. He appeared in 57 NHL games across five seasons with the Islanders, recording three goals and three assists.

Last season, there were no in-season coaching changes in the NHL for the first time since the Original Six expansion. Quenneville's departure marks the second firing in a week. The Los Angeles Kings fired John Stevens over the weekend, replacing him with Willie Desjardins.

Should the Blackhawks have fired Quenneville?
The Around the Horn crew questions if the Blackhawks made the right decision to fire Joel Quenneville.
Report a correction or typo
Related topics:
sportsespnchicago blackhawksnhljoel quenneville
Copyright © 2020 ESPN Internet Ventures. All rights reserved.
More Videos
From CNN Newsource affiliates
TOP STORIES