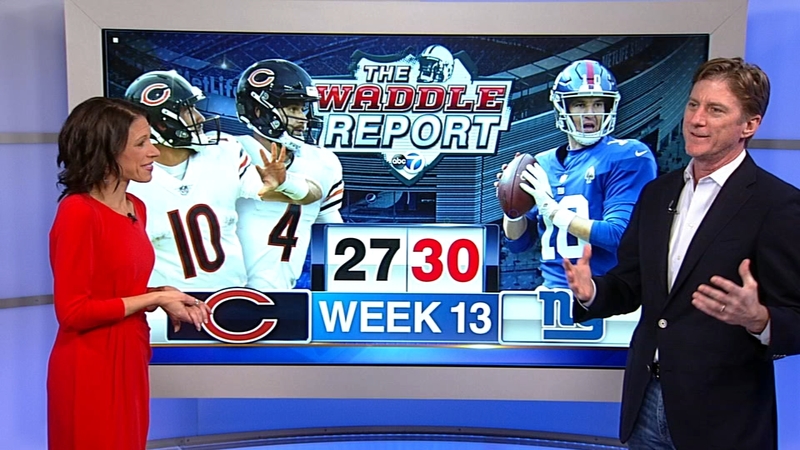 CHICAGO -- The New York Giants finally have a signature win to carry them through the rest of the season and maybe beyond.

While beating the NFC North-leading Bears wasn't pretty and involved blowing up a 10-point lead in the final 1:13, the Giants showed character in a wild game in the rain highlighted by trick plays - and a reminder of William "The Fridge" Perry.

The Giants (4-8) won for seventh time in 28 games over the past two seasons as Aldrick Rosas kicked a 44-yard field goal in overtime in a 30-27 win Sunday, snapping the Bears' five-game winning streak.

"The takeaway is, and I told the team this, some people are fond of talented people, some people are fond of smart people. I'm fond of tough, resilient people," Giants coach Pat Shurmur said. "When you are trying to flip culture and when you are trying to build something, you have to dig in on that. There was some toughness and resiliency when they came back to tie things up."

Rosas' third field goal of the game came on the opening series of overtime. It was set up by a 29-yard run by rookie Saquon Barkley, who finished with 125 yards on 24 carries.

"It speaks to the resiliency of the guys," Giants left tackle Nate Solder said after the team refused to fold following the Bears' late heroics. "It speaks about the type of guys we have in the locker room and we just got to keep doing it and moving forward and believing in each other and doing it together."

The Giants didn't nail down the win until Janoris Jenkins knocked away a deep fourth-down pass to Taylor Gabriel after quarterback Chase Daniel fumbled on consecutive plays on the rainy afternoon to set up a fourth-and-8.

Chicago (8-4) forced overtime by getting a 21-yard field goal by Cody Parkey and a 1-yard touchdown pass from halfback Tarik Cohen to Anthony Miller as time expired in the fourth quarter. The trick-play touchdown was set up by a recovered onside kick by Daniel Brown on a play Giants star receiver Odell Beckham Jr. did not dive for the loose ball. Then came a questionable pass interference call in the end zone against cornerback B.W. Webb with :03 to go.

"I'm proud of them for fighting to the end. Not every team will do that," Bears coach Matt Nagy said. "We've got a bunch of high-character guys that will fight till the end and that's a credit to them. We've got to figure out how to learn from this. This is part of that callus that goes on."

Besides the Cohen pass on what appeared to be a sweep, the Giants saw Beckham throw and catch touchdowns, and Chicago nose tackle Akiem Hicks dive over on fourth down from 1 yard on a play made famous by Perry in the Bears glory days in the mid-1980s.

The Giants seemed to have it wrapped up when Rosas kicked a 37-yard field goal for a 27-17 lead with 1:49 to play. But the Bears rallied behind Daniel (26 of 39 for 285 yards, a TD and two interceptions) and several mistakes by the Giants, who were called for 12 penalties for 107 yards.

New York had two penalties on the tying drive, which featured a 23-yard, fourth-down pass from Daniel to Cohen to the Giants 9 with 11 seconds left in regulation.

Cohen finished with 12 catches for 156 yards.

Linebacker Alex Ogletree intercepted two passes, scoring on an 8-yard return on the second play from scrimmage. The Giants forced three turnovers and had a season-high five sacks against Daniel, who was starting his second game for the injured Mitchell Trubisky (shoulder).

The Giants made many big plays in the second half. Beckham threw a 49-yard TD pass to Russell Shepard and caught a 1-yard, fourth-down TD from Eli Manning (19 of 35 for 170 yards and an interception) as New York opened a 24-14 lead in the third quarter.

Beckham said primary target Bennie Fowler was double covered and he was about to run until he saw Shepard.

"I saw him down the middle of the field and I was like, this can't be real, and I just launched it to him," said Beckham, who has thrown two touchdowns this season.

A 36-yard field goal by Parkey got the Bears within 24-17 in the third quarter.

"That's definitely not our best," Bears linebacker Danny Trevathan said. "We had moments of it, we just didn't play four quarters, which is what we need to do when we have tough games like this."

Rosas, who kicked a 57-yard field goal on the final play of the first half to make it 14-10, and added a 37-yard field goal after Sean Chandler recovered Gabriel's fumble deep in Bears territory.

The Bears came right back and forced the overtime.

Daniel had a 2-yard touchdown pass by Daniel to Adam Shaheen in the first quarter. Hicks scored in the second.