'Your eyes get big': Why Kyle Hendricks is pitching up in the zone 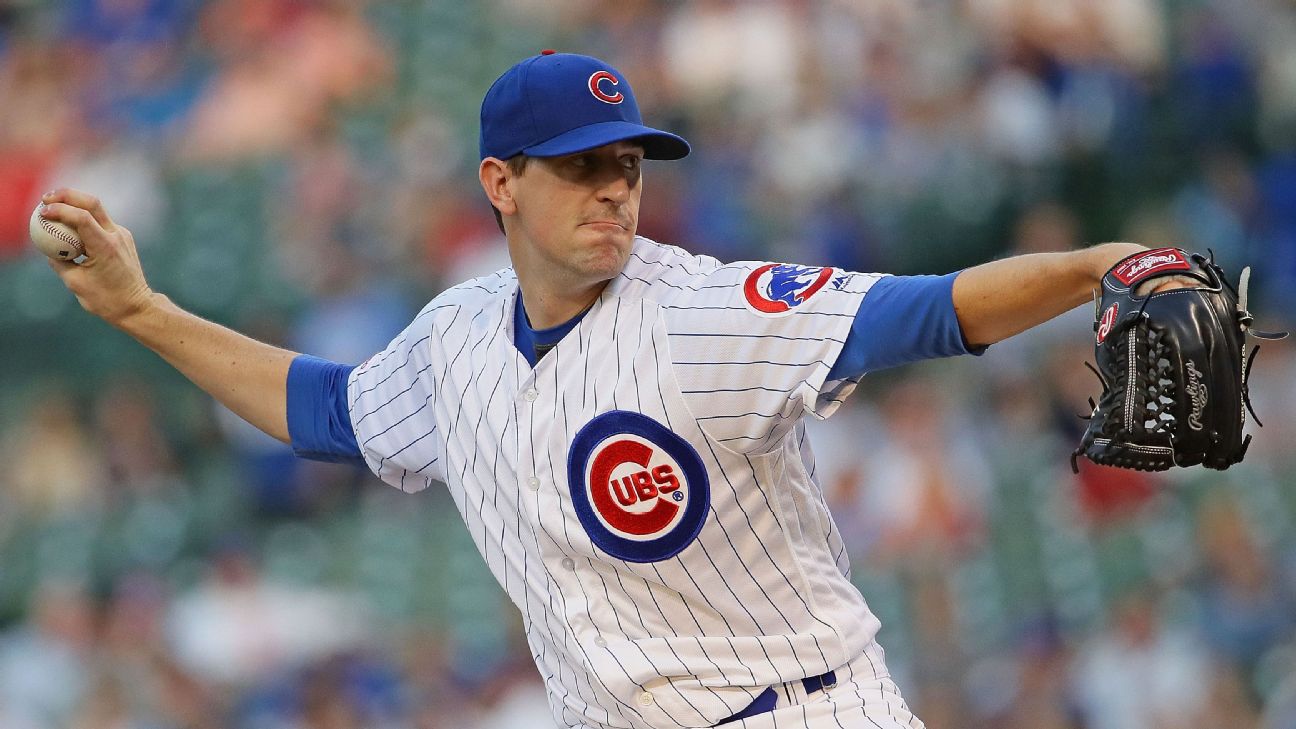 CHICAGO -- It's a trend that is becoming more and more popular with pitchers, even the soft-tossing ones such as Chicago Cubs righty Kyle Hendricks. When he takes the mound against the St. Louis Cardinals on Sunday night, don't be surprised if you see his catcher coming out of his crouch on almost half the pitches he throws.

Living upstairs in the strike zone -- or even higher -- is no longer just for the flamethrowers. The launch-angle era has changed strategies for many, including hurlers who average 87 mph on their fastball.

"I've been doing it more lately," Hendricks said last week. "The way the game is going, the way guys are swinging, I feel like more of the holes are being presented up in the zone now."

"More" might be an understatement. According to ESPN Stats & Information research, Hendricks has thrown at least 40 pitches in the upper half of the zone in each of his past five starts. The results have been astonishing: he's 4-0 with a .198 batting average against, striking out 37 in 34 innings pitched. For the season, Hendricks is climbing the ladder nearly 10 percent more than he ever has.

"Once you do it and see the swings, you get the confidence to do it more," Hendricks said. "I was a little more timid to do it but once you see those bad swings at the top of the zone, even on 88 or 86 mph, you start trusting it. You realize it's just a swing-path thing, and if I hit my spot, I'm going to get a bad swing."

It really is as simple as that. And the converse of going really high in order to combat those swings is changing the eye level and going really low. No longer is a pitch at the knees, even a perfectly executed one, the ideal. That's where the launch-angle swings live nowadays, and can do a ton of damage on what used to be a good pitch. So in short order, Hendricks has perfected the art of going high, for a swing-and-miss, then going down near the ankles for potentially another one.

In his most recent start, the Colorado Rockies got a taste of what Hendricks is doing this season -- and it's different than what they've seen in the past.

"Until you get in the box, you really don't realize he has you thinking early," Colorado's David Dahl said after going 1-for-3 against Hendricks. "Busts you in and up and then his other stuff plays off of that."

Dahl shook his head, remembering a swing-and-miss on a sub-90 mph fastball up near his shoulders.

"Your eyes get big and the next minute you realize it's by you," Dahl said.

Others claim they're surprised Hendricks throws only 87 or 88 mph, as the rising action gives his pitches some late zip. Career hitting machine -- and former Cub -- Daniel Murphy summed up the difference this way:

"He's altered the shape of his fastball, which allows him to get to different quadrants of the zone they may have wanted to stay away from, maybe previously in his career," Murphy said.

In other words, the two-seam fastball has been replaced by a rising four-seamer and opposing hitters are biting. They're hitting just .171 off pitches in the upper part of the zone, the lowest rate in Hendricks' career.

"Weak contact is not necessarily down and away anymore," Cubs pitching coach Tommy Hottovy explained. "If that's up at their hands, or above, even at 88 or 89, that ball is by those guys, looking more like 91 or 92 mph."

Not surprisingly, opponents are swinging and missing 22.6 percent of the time on those pitches, the highest percentage of his career -- and highest since 2014. It's a testament to his commitment. Imagine a pitcher who used to live down and away -- winning the ERA title in 2016 with that strategy -- then essentially changing much of who he is. It took some convincing.

"A lot of the stuff I've been pushing him to do over the years, initially he wasn't on board because he hadn't done it," Cubs game planner Mike Borzello said of the 29-year-old Hendricks. "He would say to me, 'I know what you're saying. I know it's right. But when I'm standing out there with the ball, it's a little tough to try stuff I'm not used to doing.'"

All that changed when it became obvious the only way to combat the home run swing paths invading the game was to keep going up and up and up.

"Back in the day you would try and establish down," Hendricks said. "But there's been a change in the game. We talk about [with other pitchers]. It's been interesting. You have to proactive more, in your bullpen and side sessions. You have to establish yourself up there without missing too often."

Borzello added: "He's made an adjustment solely based on the swing path of hitters today."

So you might find his bullpen catchers getting out of their crouch between starts as well. Hendricks is mastering the art of going upstairs, and since he locked everything into place, the results have skyrocketed. Since May 1, he's compiled an impressive 2.09 ERA.

Of course, it sounds pretty simple, but it isn't that easy to execute. For example, if Hendricks doesn't get a pitch high enough, his 87 mph fastball is going to get hit a long way. Or, if he simply lives above the zone, smart hitters will catch on.

"You have to throw it for a strike," Hendricks said. "When I throw a few for a ball, they begin to lay off."

Repeating those high fastballs can also come back to hurt a pitcher the third or fourth time through the lineup. Major league hitters are good at learning and adjusting, not just from game to game, but within the same game as well.

"Trying to stay unpredictable, so you have to pick the right spots where you are going to double up, where you're going to chase a high heater with another one," Hendricks said. "To a lefty, I'm not throwing as many sinkers down and away. That's a product of the game for sure. Lefties have changed to that launch-angle approach. I'm pitching more to the top of the zone to them, bottom of the zone to righties."

So the cat-and-mouse game with hitters continues, as always, but it has changed. And Hendricks has changed with it. The Dartmouth product is as smart as ever, evolving into a different kind of pitcher with basically the same stuff. It has been a fascinating adjustment. Just ask his opponents.