CHICAGO (WLS) -- Investigators said an electrical problem may have caused a fire at a horse stable in Chicago's Old Town neighborhood overnight. Fortunately, none of the animals were injured.

Reebok, Ellie May, Spirit and Cisco, survived the fire that destroyed 12 of the carriages that Chicagoans usually see strolling down the Magnificent Mile.

Chicago firefighters responded to the 1400-block of North Orleans Street just after 1 a.m. Friday. Smoke and flames were seen billowing from several carriages outside. 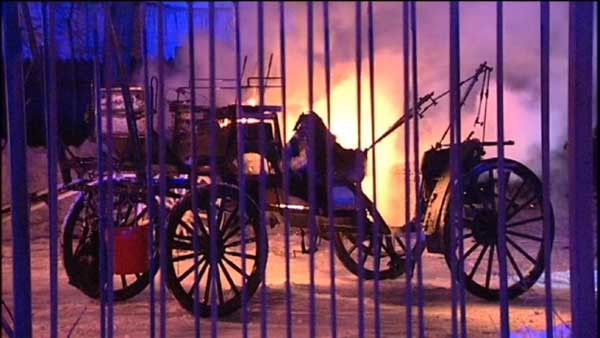 The fire was struck around half an hour after firefighters arrived.

Two separate carriage operators who rent space in this historic Old Town stable lost all of their equipment. Jim Rogers with Great Lakes Horse and Carriage said he thinks the fire was no accident.

"I believe this is an intentional act. There has been a history of threatening letters from radical animal rights activists," Rogers said.

The owners of Antique Coach and Carriage showed ABC7 Eyewitness News graffiti on the walls. They said the words "freedom" and "save the horses" were not there on Thursday, and that police and fire investigators are aware of them.

In September 2012, there was a suspicious fire in the horse carriage barn. No animals were hurt. Investigators said it was set by a disgruntled employee. The space had different tenants when this fire occurred.

Jenny Barkan, who lives nearby, said she was sad to wake up to the smoke and flames.

"My first concern was obviously the horses. Glad to hear they're OK. But I think it's terrible. They roll by my apartment every day," Barkan said.

A spokesperson for the Bureau of Alcohol, Tobacco, Firearms and Explosives say they are investigating the fire along with the FBI, Chicago Fire Dept., Chicago Police Dept. Bomb and Arson, and the state fire marshal.

The cause of the fire is under investigation and is not considered suspicious at this point.