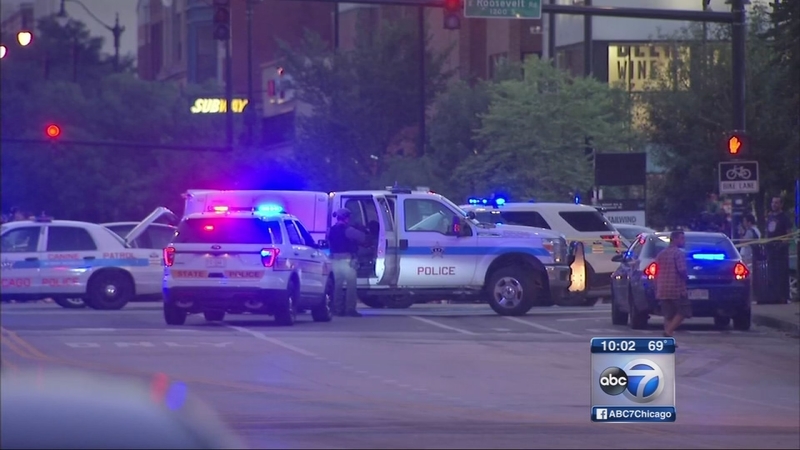 CHICAGO (WLS) -- There was a major police presence in the South Loop Saturday evening after witnesses said Illinois State Police opened fire on a vehicle fleeing a traffic stop in the city's Chinatown neighborhood.

State police are investigating, but are not releasing many details or confirming early reports that the incident started with the pursuit of carjacking suspects.

"I'm still shaking right now because I've never seen this, I've never witnessed such thing before. And I was panicking at the time," said witness Mohammed Al Abdul-Salim, who captured the GoPro footage.

Al Abdul-Salim and Omar Al-Marmari were outside the Chinatown CTA Red Line stop when they saw a black BMW SUV pulled over on the street as officers approached with guns drawn.

That's when they pulled out their GoPro.

"I saw the driver raise his hand, but then he just kept moving. He ran away," Al-Marmari said.

One of the officers fired at the SUV, shattering the vehicle's window, both men said.

Early reports say the driver was shot in the neck, but state police have not confirmed that information.
Minutes later, there was a massive police presence in the South Loop. K-9 teams and officers in tactical gear were roaming streets and alleys.

Witnesses said four men ran from the black BMW SUV, one with a bloody shirt.

Late Saturday, some streets in the South Loop were still blocked off.

Investigators also remained late Saturday at the scene of the shooting in Chinatown.

"I was speechless. I had no idea what to say or what to do at that moment. I was just panicking," Mohammad said.