The video continues to show Gieszinger grabbing at another girl's hair before everyone makes a run for it out of the classroom.

Days before the strange episode in the classroom of Margaret Gieszinger, the teacher who forcibly cut a student's hair, students say the science teacher was already showing signs of odd behavior.

On Thursday, the Tulare County Office of Education released a statement saying that Gieszinger will not return to her classroom at UPHS, where she has worked since August of this year.

RELATED: 'It's not her. It's not who she is': Husband of teacher who cut student's hair says he's shocked, confused

Geiszinger is being held at the Tulare County Pre-Trial Facility on $100,000 bail after she forcibly cut a student's hair in class.

RELATED: Teacher who cut student's hair may have had a psychotic episode, says Fresno psychologist

If convicted on all charges, Gieszinger faces up to 3 years, 6 months in jail.
Report a correction or typo
Related topics:
californiabizarrecrimeeducationu.s. & world
Copyright © 2021 KFSN-TV. All Rights Reserved.
RELATED 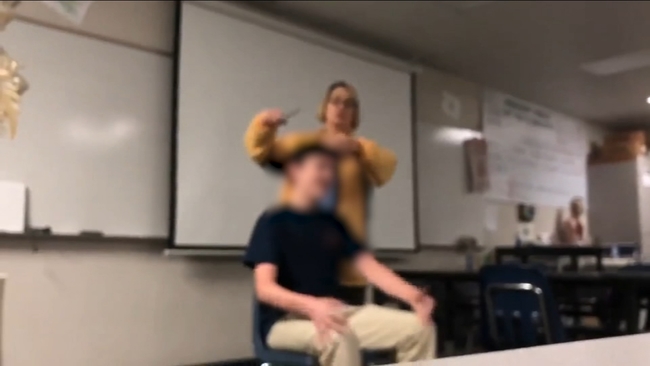