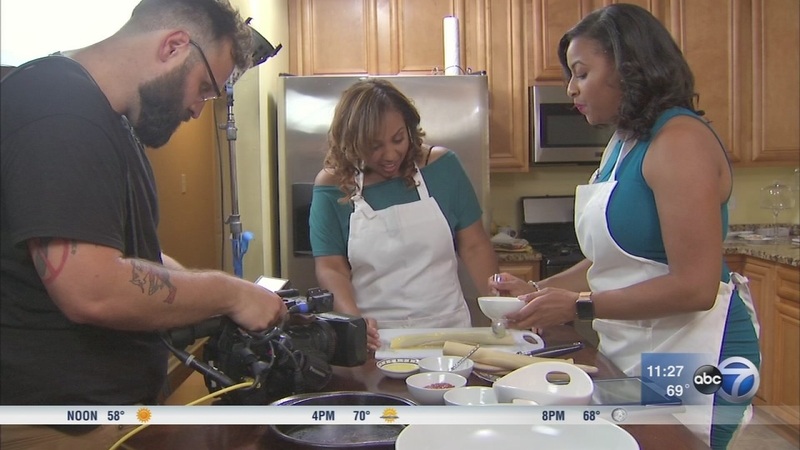 CHICAGO (WLS) -- A big surprise for two Chicago super fans of ABC's "The Chew" when a camera crew came to their home on Thursday to film a segment for the show. But that wasn't the only thing producers had on the agenda.

Chicago natives Tisa Ross and Dana Perry are best friends and they really bonded over cooking, so it's natural they also share a love for ABC's "The Chew."

Not only do they record the show every day, but they also binge watch on the weekends.

"I really like 'The Chew' because it mirrors two things I love which is food and entertainment and things of that sort, so I love it," said "The Chew" super fan Tisa Ross.

When producers found out the two friends were super fans, they wanted to give the ladies a special treat-- their own segment in an upcoming show.

"It's definitely been a great experience and getting to see behind the scenes and we love the show. It's just wonderful getting the opportunity to take it all in, I almost can't believe it," said Ross.

But the camera crew and the TV shoot in their home was just a cover for an even bigger surprise.

Tisa and Dana very quickly realized they had been set up for a big surprise-- the ladies are headed to Walt Disney World!

"I thought it was going to be like a video of Clinton and Carla saying, 'Hey girls,' but then they said we were going to Disney World, oh my goodness, for five days I couldn't believe it; I couldn't believe it," said "The Chew" super fan Dana Perry. "It definitely pays off to be fans of 'The Chew.'"

"We want to thank 'The Chew,' thank ABC, we're so excited this is wonderful," said Ross.

The episode featuring Dana and Tisa will air sometime in October.