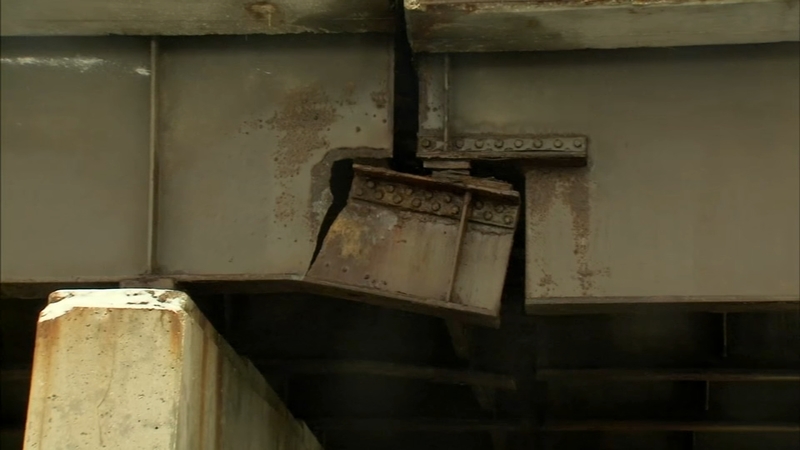 CHICAGO (WLS) -- All lanes of northbound Lake Shore Drive re-opened Tuesday afternoon, a day after a portion of the road was closed due to cracks in the bridge's support beam.

Engineers worked to raise the road to put shoring towers in place. CDOT said repairs for a permanent fix is expected to be complete in the next 2-3 weeks.

"We would not be reopening this roadway unless we felt fully confident that it was safe for the public to use again," said Rebekah Scheinfeld, a CDOT spokeswoman.

A first spotted the cracks around 10 a.m. Monday beneath northbound Lake Shore Drive just south of Chicago River that forced crews to shut down northbound traffic between Jackson and Grand.

Chicago officials are looking at bridge infrastructure across the city after a steel beam cracked on the Lake Shore Drive bridge.

Experts worry that more issues like this to come.
"When a road cracks, we patch it," said Ed Maher, spokesperson with the International Union of Operating Engineers Local 150. "We fill a pothole and when the weather breaks like this and you have wild swings in temperature, that asphalt just explodes out of the pothole and we're going to see a lot more of that in the days to come because it's so much up and down."
According the American Society of Civil Engineers, more than 2,300 Illinois bridges are structurally deficient. Maher with the International Union of Operating Engineers says this is an overdue safety issue that needs better funding.

"We've got to find a long term sustainable funding solution that allows for us to get in and actually fix the problem, stop putting bandaids on these roads and bridges and actually repair them to a point where our families can feel safe driving on them once again," Maher said.

CDOT says they did a full inspection of the Drive Monday and found one other trouble spot on the southbound entrance to Lake Shore from Wacker. That section has since been cleared and reopened.

According to the Illinois Department of Transportation's website, the bridge was last inspected on June 29, 2017 and found to be in fair or satisfactory conditions. The report does note that inspectors found some minor cracks and deterioration. Scheinfeld said the bridge is inspected every two years, as per federal standards, and was due for re-inspection in June of this year.

Crews continue to repair the northbound Lake Shore Drive bridge with hopes of reopening it for the evening rush hour Tuesday.