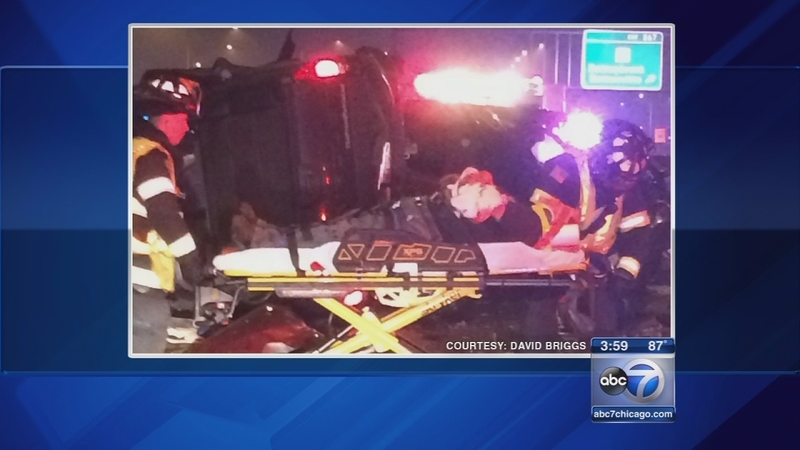 Wrong-way driver charged with DUI in I-55 crash

BOLINGBROOK, Ill. (WLS) -- Yarelie Melgarejo, 24, has been charged with DUI in a wrong-way crash involving three vehicles that closed all lanes of the Stevenson Expressway near Route 53 for over an hour overnight.

Melgarejo, a 21-year-old woman and a 60-year-old man were injured in the accident, according to Illinois State Police. Melgarejo, of Plainfield, is under arrest at Good Samaritan Hospital in Downers Grove.

State police said Melgerejo's red Ford Explorer was traveling south in the northbound lanes of I-55 south of Route 53 when it struck a black Toyota Sienna and a gray Chevrolet Avalanche just after 2 a.m. Friday.

Witness David Briggs said he and two other motorists pulled over and kicked in the back window to help the 60-year-old Chicago man out of his overturned truck.

"There was a loud boom in the truck, so we didn't know if it was going to explode or what. I mean, we saw gas leaking all over the place," Briggs said. "When the gentleman finally got out he just kept asking, 'What happened? What happened?'"

The man was bleeding from his head, face and arms, but was able to stand on his own. Briggs also said Melgarejo was crying hysterically on the side of the road after the crash.

"I ran up with two other people that also stopped at the same time as me, went up to the Chevy Avalanche that was on its side and we kicked out the back window and started yelling and saw that there was a guy in there, started yelling at him to get out... slowly crawled out of the window the same time I saw him moving, I got on my phone real quick and called the police, ran and grabbed a towel that I had and gave him the towel," Briggs said.

Melgarejo and the man were transported to Good Samaritan after the accident. The 21-year-old Chicago woman was taken to Bolingbrook Adventist. All three drivers were hospitalized with non-life threatening injuries. There were no passengers involved in the crash.

All lanes of I-55 were blocked for over an hour while crews cleared the scene. But lanes re-opened around 3:45 a.m. Friday, ahead of the morning rush.

State police are investigating. The Illinois Secretary of State's office says Melgerejo has a clean record, except for seat belt penalty fines she has not yet paid. Her license cannot be renewed until she pays the fine.
Related topics:
trafficbolingbrookcar crashtraffic
Copyright © 2021 WLS-TV. All Rights Reserved.
More Videos
From CNN Newsource affiliates
TOP STORIES