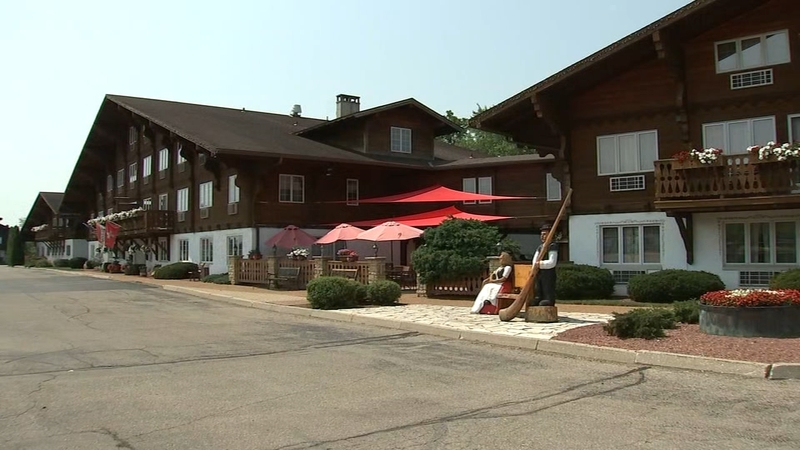 NEW GLARUS, Wis. (WLS) -- Roz Varon continues a special series on nearby driving destinations - a mini-vacation you can get to on a tank of gas. This week's pick for "One-tank Trips" is New Glarus, Wisconsin, a town with a lot of Swiss heritage.

The charming southern Wisconsin town has kept much of its Swiss heritage and traditions. In fact, they're celebrating the town's 175th anniversary this weekend!

If you can't make it to the celebration this weekend, there are plenty of reasons to make this one tank trip any time of the year!

As you enter the town of New Glarus, Wisconsin, you'll immediately understand why it's called America's Little Switzerland! From the chalet-style architecture to the rich Swiss cuisine, old-world traditions have been kept alive since the first group of settlers established the town in 1845. We started at an authentic 1887 train depot.

"The train stopped running here in 1972, but a group of locals who were really dedicated to restoring it came," said Bekah Stauffacher, executive director of the New Glarus Chamber of Commerce. "I the 90s and put it back to its former glory and now it houses the chamber of commerce."

It also is the beginning of the 24-mile Sugar River Trail, a terrific bike trail which runs along the former railroad tracks. You can rent bikes and helmets at the depot.

To get a deeper dive on the colorful town heritage, we visited the Swiss Historical Village and Museum. It has 14 original and replica buildings giving a glimpse into the past of the Swiss settlers - what it was like for them to live and work here. Each building has furnishings, tools, books and clothing that were used in everyday Swiss-settlement life. While the graves are not real, the gravestones are, belonging to some of the colony's founding members.

We got a taste, literally, of Swiss traditions during our lunch at the Chalet Landhaus Inn and Restaurant. Chef Mike Nevil gave us a delicious fondue demonstration!

"We have Gruyere, we have Emmentaler, which is Swiss Cheese and we also have a Gouda that's made locally here," Nevil said.

Of course the best part, sampling! As if that weren't enough, we were treated to a smorgasbord of Swiss specialties.

Next stop, one of the oldest taverns in ton to sample locally brewed beer. Puempel's Olde Tavern dates back to 1893! It's filled with charm, character, and beer!

"We offer this all the time," said Deb Guyette, bartender at Puempel's Bar. "It's a chance to sample our four beers that we have on tap and with this you get a complimentary pint glass."

Ok, this one wins, Spotted Cow! And then there's this quirky tradition of throwing dollar bills on the ceiling!

"So our customers come in and we take a dollar bill, put a thumb tack through it and we wrap it around the half dollar coin, works as a little bit of a weight," Guyette said. "You make it like a little dart, stick it between your two fingers, bend at the knees."
When the ceiling is full, the money is donated to charity. Our final stop - a new addition to this old-world town - Bailey's Run vineyard, a family run business that opened in 2018.

"We grow a number of cold climate grapes, we have edelweiss, Frontenac and Itasca grapes on this property," said Janet Kuehl, owner of Bailey's Run Vineyard. "The vines like to be dry and they like the roots to be dry and the more they have to struggle, the better the grapes are gonna be. We pick everything by hand, so we'll get a small team out here and have basically a harvest day and can usually knock it out fairly quickly."

They make about 30 wines from fruity to dry. They offer wine tastings every day, with a spectacular view of the vineyard. And if you feel a cold nose nuzzling next to you, don't worry! That's their namesake Goldendoodle, Bailey. She's sweeter than their sweetest wine!