ABC7 Exclusive
WLS
By John Garcia
CHICAGO (WLS) -- Big news for runners, bicyclists and pedestrians who use the Lakefront Trail: part of the Navy Pier Flyover will open Thursday.

ABC7's John Garcia joined Mayor Emanuel for a run early Wednesday morning along the lakefront path south of downtown, where the separated bike and running paths are now open.

"Cars fly by and they make this right turn here and no one looks," runner Brian Klesath said.

Megan Williams suffered a fractured skull several years ago when a cyclist hit her at the intersection.

"I was turning around. I looked left, I looked right, and before I knew it, everything went black," Williams said.

Not just for the quality of life, but there's going to be hopefully a dramatic reduction in accidents.

There is still a section of the flyover - an on-ramp to the southern portion - that remains under construction. It is expected to be completed early next year.
Report a correction or typo
Related topics:
travelchicagogold coastbike lanesrahm emanuelpedestrian walkwayroad safetylake shore drivebikespedestrians
Copyright © 2021 WLS-TV. All Rights Reserved.
RELATED 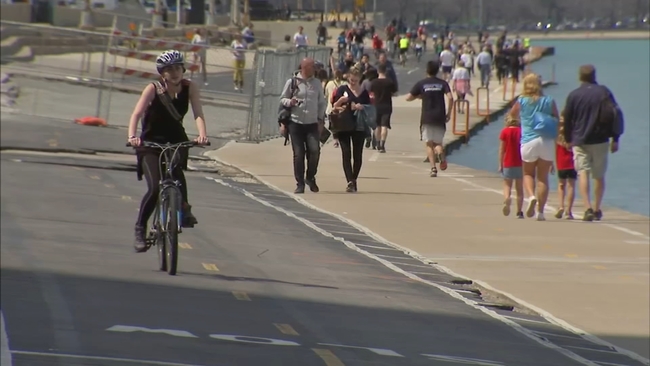