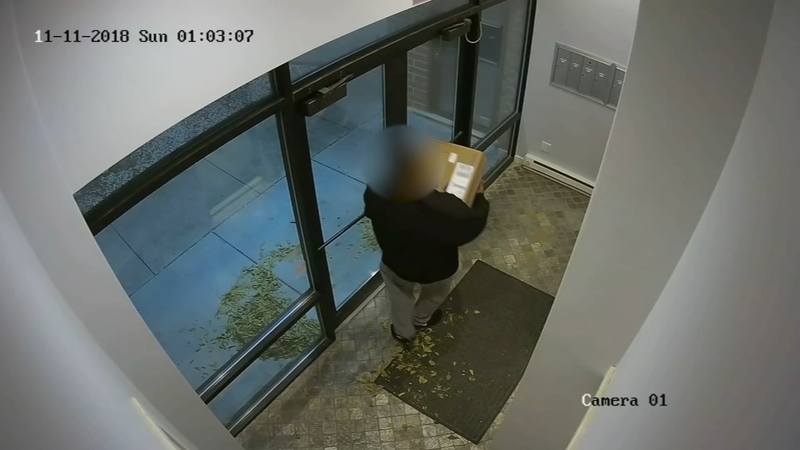 CHICAGO (WLS) -- A couple living in Chicago's Old Town neighborhood told the ABC7 I-Team a food delivery man stole their packages on his way out the door. They blamed an Uber Eats driver and his so-called accomplice.

"I'm furious, it shouldn't be happening," says Hayley, who did not want to give her last name. "First of all it's a safety issue; there's only supposed to be the driver that, you know."

Haley showed Consumer Investigative Reporter Jason Knowles security footage. On it, the Uber Eats delivery driver pulls up, a passenger gets out with the ordered food and gets buzzed into the mid-rise apartment building.

Later on the footage, when the mystery passenger leaves, he isn't empty handed; he has two packages in his hands. The boxes go into the backseat of the Uber Eats car, where there appears to be more boxes.

"It is the holidays, everyone's ordering gifts," says Hayley. "And we don't want anyone else's stuff to get stolen."

Hayley was not the Uber Eats customer, but said her packages, seen on the video, were taken from inside the condo building.

She said the merchants replaced her items.

"Well, there was motor oil, dental floss, and eye and ear protection for the shooting range because my husband is a vet," she said.

The resident who ordered the food through Uber Eats provided the I-Team with screen shots of the pizza order. It was registered as being "completed" just seven minutes after the time stamp on the video shows the car in question leaving.

Hayley filed a police report and her husband tweeted Uber.

So the I-Team contacted Uber, who replied, "...Our support team strives to provide high quality customer service each day and we are disappointed this standard wasn't met here."

Uber said representatives spoke to Hayley and her husband, who shared a recorded phone conversation:

Uber Manager: "Obviously there has been pretty poor support experience... one, we apologize for this pretty poor experience, but then also I can let you know that the driver in question who did take your packages is permanently deactivated from Uber, and also we are working with any inquiries that we get from police on this matter."

Uber also told the I-Team that it "permanently removed" the drivers' "access to the platform."

Hayley said the vetting process hasn't worked. Uber maintains that "delivery-partners," who are the drivers and sole food deliverers, go through a screening process prior to gaining access to the app. A spokesperson also confirmed with that the passenger who delivered the food was not the "delivery partner." Uber said that is a violation of its terms and conditions.

If you're ordering food on an app it will usually have driver information and a picture. Uber Eats even provides the make and model of the vehicle and the license plate. You should use it to make sure the right person is making your food delivery.

To protect holiday packages you can have them delivered to UPS or Fed Ex drop off locations, or an Amazon Locker. You can also require a signature at drop off.

MORE INFORMATION ON HOW TO PREVENT PACKAGE THEFTS

Fed-Ex: How are people preventing packages from disappearing?