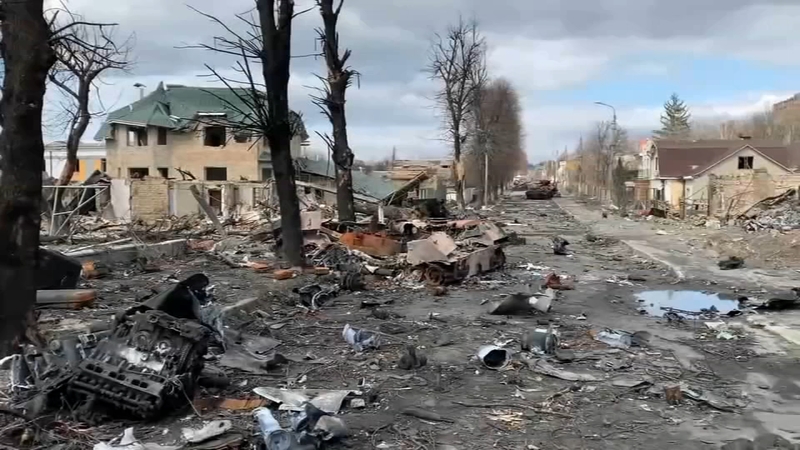 CHICAGO (WLS) -- Since the Russian-Ukraine war began, Northwestern surgeon and Ukrainian-born Dr. Vitaliy Poylin gets a daily update from doctors he helped train in his native country.

His call on Tuesday was with Dr. Adrian Reiti. The Ukrainian surgeon has been living at a Kyiv civilian hospital since the war began. He said he hears an explosion every day.

"Our part in the hospital is total blackness because due to bombing we can't put the lights on," Reiti said.

Using headlights to perform surgeries -- often in the basement to shield themselves and their patients --doctors say there is some relief now that the Russians have retreated from Kyiv. But, civilian injuries keep mounting as patients are coming out of hiding.

"Now they have a huge backlog of urgent and emergent cases that had not needed to be done," Poylin said.

Helping with the backlog is Northwestern surgeon Dr. Sam Attar, who is using his Syrian war experience to volunteer at a Kyiv trauma hospital.

"As villages get liberated, people are finally being able to get care," Attar said, "so they are coming in with dirty wounds and old fractures that require a lot of work."

While doctors on the front lines see typical civilian war injuries from mines, bombs and bullets, the domino effect of the war is seen all over the country. Northwestern's Dr. Sophia Korovaichuk stays in close touch with a relative who is an OB/GYN in western Ukraine.

"Things she noticed from the tremendous stress, they are seeing a lot more miscarriages," Korovaichuk said.