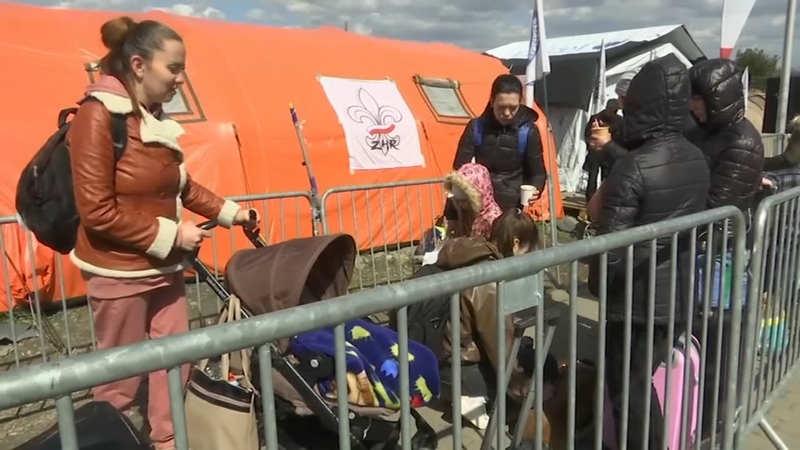 CHICAGO (WLS) -- Finally, there is some clarity for Ukrainians living in the United States with family still in the war zone.

Last month, the Biden administration announced it would allow the temporary resettlement of up to 100,000 Ukrainian refugees. But until now, there was no clear path in place.

On Thursday, the president promised an expedited process that will allow U.S.-based individuals or entities to sponsor Ukrainian citizens to live and work here for up to two years. It begins April 25.

"We have to do our part," said Sen. Dick Durbin, D-Ill. "The United States stands not only behind the Ukrainian fighters, we stand behind their families who have been displaced."

According to the State Department, 15,000 Ukrainians have made their way into the United States thus far, mostly entering through the southern border with Mexico.

The new program, "Uniting for Ukraine," will streamline refugee applications, but will also shut down the route through Mexico, except in extreme circumstances, officials said. The U.S. said it expects to admit up to 100,000 refugees from Ukraine.

Mayor Lori Lightfoot pledged to support any refugees who come to Chicago.

"We know how to plug and play and support these folks, not only with transition and housing, but also jobs, schools and other support, so we're ready," Lightfoot said.

For Tetyana Chervinska, it means she can now bring her mother, sister-in-law, niece and nephew to stay with herself and her husband.

"Time is of the essence right now, so that's meaningful," Chervinska said. "I do hope to at least be able to bring them here and kind of have a safe space to live for some time and ease the time of going through war."