'There is a shooter on UNC Charlotte campus:' 911 calls reveal fear after UNCC gunfire 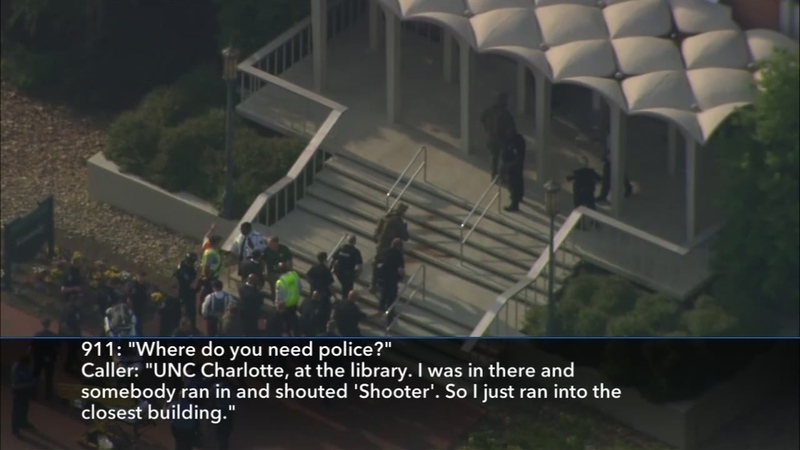 CHARLOTTE, N.C. -- "There is a shooter on UNC Charlotte campus." That message and dozens like it flooded 911 operators Tuesday night as gunfire erupted on the campus of UNC Charlotte.

Listen to the 911 calls below:

Students called from the Kennedy and Macy buildings, saying they could hear the gunman nearby.

"There is someone shooting," one caller said. "Last time I saw them they were in Kennedy Hall, I believe they moved to the library."

Listen to the 911 calls. Warning some files may be distubring to some.

"We heard five shots," another caller said in a panic. "We don't know how many shooters."

"It seems like he was shooting at one person," someone said while trying to help piece together the events. "He fired a lot of shots."

At least one of those shots hit Riley Howell.

After realizing he had no place to run or hide in his classroom, Howell took matters into his own hands by taking "the fight to the assailant."

Howell died during his selfless act. In fact, Charlotte-Mecklenburg Police Chief Kerr Putney said Howell's actions helped capture Terrell.
After the gunfire stopped and the scene was clear, Terrell was placed under arrest.

Howell and Parlier were dead. Drew Pescaro, 19, Sean Dehart, 20, Emily Houpt, 23, and Rami Alramadhan, 20, were on their way to the hospital.

Pescaro and Dehart both attended high school in Apex. They, along with Houpt and Alramadhan, are expected to recover.

His first court appearance was scheduled for Thursday; however, he waived his right to be present.