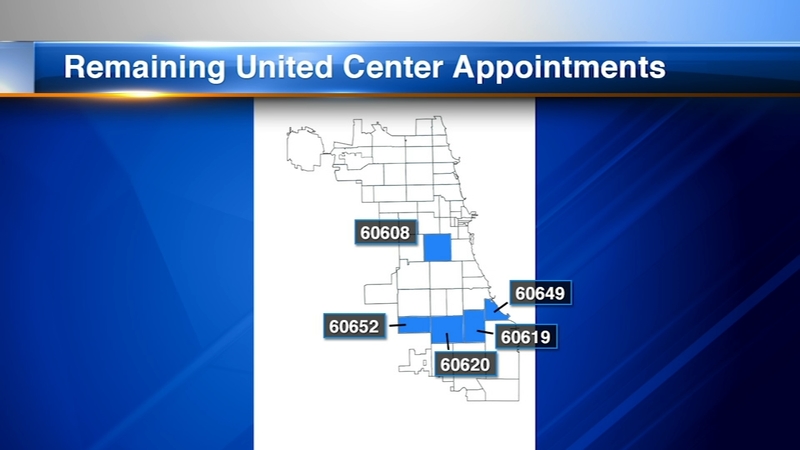 With only about 2,500 vaccinations scheduled, it was a soft opening at Illinois' largest mass vaccination site, meant to work out the glitches. And there were some, including a one-hour delay getting up and running.

"I did not think it was going to be this easy," said Barbara Carlton, 85. "I thought I would have to wait longer in line."

"My only question was, 'When will I be scheduled for my second shot?" Joyce Wixson said. "And they said they will send an email in approximately 3 weeks, so I don't have to fight and go online and search and waste time."

Many of those able to be vaccinated Tuesday said they will feel less fearful going out in public. They also said they just want to be with their families.

Many United Center appointments remain open. Of the 110,000 total appointments, officials said Tuesday only 40,000 were booked by Illinois residents 65 and older, and only 10,000 by Chicagoans in 1B plus. The rest, set aside after most senior appointments, went to people outside the city.

"We have to do this in a way that is consistent with equity, and that's critically important," Chicago Mayor Lori Lightfoot said.

Officials say the 50,000 unfilled appointments are not yet publicly available. Instead, Chicago and Cook County officials are conducting targeted outreach. The city is prioritizing five zip codes: 60608 on the Near West Side, and 60652, 60620, 60619 and 60649 on the South Side.

"If you are in one of these zip codes, there will be additional outreach," Dr. Allison Arwady, Chicago Dept. of Public Health. "There will be ways to sign up. We're going to have more of that to come."

But should officials have anticipated a first-come, first-served appointment system would lead to disparities?

"It's been more than the last couple of days. It's been the past few months," said Prof. Hani Mahmassani, director of Northwestern University Transportation Center. "It's been learn as you go, adjust things, and it's created more confusion and stress."

Mahmassani said there should have been a direct outreach component at the outset. When the United Center site was announced two weeks ago, Mahmassani suggested multiple smaller vaccination centers in targeted areas, rather than one large centralized site, would more efficiently bring the vaccine to communities of greatest need.

"There is no reason why we could not do a better job of targeting folks in an equitable manner," said Mahmassani.

Uber teamed up with the city to donate 20,000 free rides to Chicagoans to get people to and from the United Center mass vaccination site.

Transportation is a key issue as Chicago works to vaccinate people who live in the areas hardest hit by the virus. Uber teamed up with the city to donate 20,000 free rides to Chicagoans to get people to and from the site.

"When you sign up for the appointment, you will be asked if you need transportation, and if you say yes, you will be given info on how to access that ride," Uber's Bobby Kellman said, adding that the company is working to provide free rides to other mass vaccination sites.

People came from all over the city and suburbs and the state Tuesday. They were able to secure appointments before FEMA announced on Sunday that only Chicago residents would be eligible for United Center appointments going forward, in an effort to make shots accessible to people who need them the most.

"There have been appointments set aside for suburban Cook County and they are doing that preliminary work and outreach to make sure the majority of those appointments can be taken by people who most need that vaccine," said Dr. Arwady.

Officials blamed FEMA for the last-minute changes, which left the city, county and state scrambling and many people very confused about what they're supposed to do.

"FEMA came in late in the game here, right, and decided they wanted to change things," Gov. JB Pritzker said. "And, as you can imagine, there is technology involved in this, there are decisions being made like, well, if we're going to exclude other parts of the state like the collar counties, how are we going to serve them? So there's a lot of discussion going on."
Promoted as a federally-sponsored state-wide facility, the last-minute residency requirement was made after it was discovered only 40% of appointments had gone to city residents.

A second website is now being set up so that suburban Cook County residents can eventually sign up for vaccine appointments at the United Center, as well.

Even Chicago residents experienced issues signing up. ZocDoc, the website used to book appointments, went down when registration opened at 4 p.m. Sunday, then reappeared with changes asking people to confirm their location.