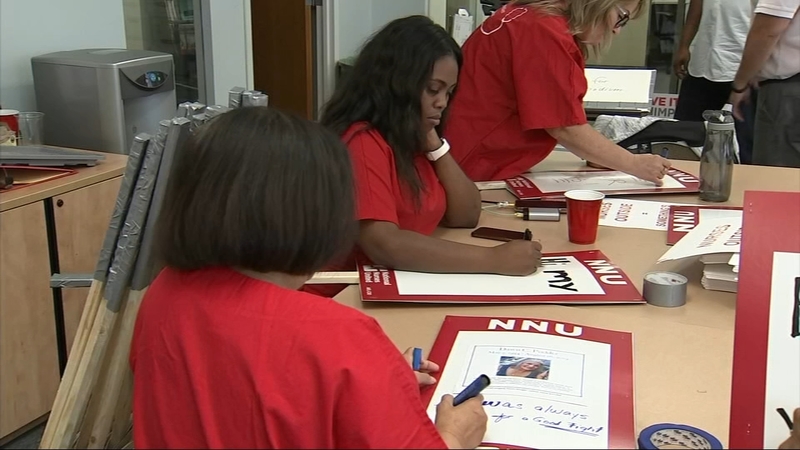 The union, National Nurses United, made the announcement late Wednesday night after contract talks broke off despite the involvement of a federal mediator.

"We've never had to strike at the University of Chicago, and we've been unionized since 1960; this is a big history for us," said Helen Bernard, ICU nurse.

"It's impacting our patients directly,' Albert said. "As we speak, we are in emergency management mode, preparing for this. We have had to bring in relief nurses."

"I call that reckless and irresponsible on the hospital's part," said Pam Valentine, University of Chicago registered nurse. She called it a "four day lockout."

University of Chicago Medical Center's contract with the National Nurses Union expired in April. Staffing, or lack of it, is a key issue.

"The nursing staff is being stretched to the limits and they have great concerns about the care they are able to provide," said Valentine, a nurse and a member of the negations team.

As an example, union leaders say nurses have filed 1,700 "Assignment Despite Objection" complaints during an 18-month period. When they file a complaint, the nurse must tell their supervisor that the shift is "suboptimal or unsafe," according to the report document.

"People don't do it because it was a bad day. They do it when they feel it was a dangerous day," said Marti Smith, lead negotiator for National Nurses United.

Albert said the union rejected a proposal that dealt with staffing. A proposal she called "very generous." But union leaders said the proposal only addressed the day shifts and not the night shifts.

"Until the nurses I know come back, I won't be coming back until they come back," said Kendra Rivers, patient.

No new contract talks are scheduled before Friday.

Nationwide, nurses are striking in California, Arizona and Florida, and starting Friday, Chicago. And replacement nurses - from across the country - will be working on the South Side.