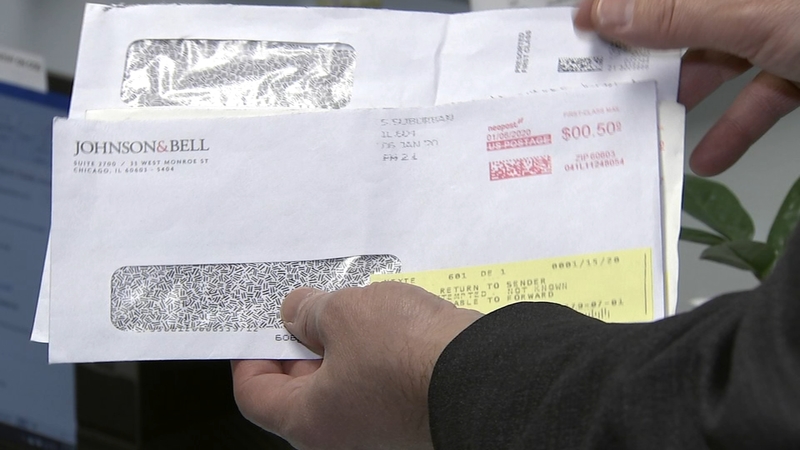 CHICAGO (WLS) -- According to the unofficial motto of the U.S. postal service, your mail will get through even in the rain, sleet or snow. But the ABC 7 I-Team found the challenges to mail delivery are worse than bad weather.

After many complaints of delayed and missing mail, Consumer Investigator Jason Knowles and the I-Team went digging through data to find out where most of the delays are coming from and why service may be unreliable.

"I'm livid. I don't have a job," said Stacey Turner. She blames the U.S. Postal Service for losing her job. "I don't have any income coming in."

"What is even sadder is nobody wants to help you," she said.

Turner received a letter from her South Chicago post office stating they were concerned and admitted her certified letter from her employer faced a "delay in our delivery processing center."

Under the Freedom of Information Act, The I-Team found that Turner's neighbors, also on Crandon Avenue, had been filing complaints about missing mail and packages. There were 43 complaints in a recent six month time period.

"It was three, four days in a row that there's no mailman, no nothing," Emil Ballog said. The Lincoln Square resident is also fed up. "You call the post office and they say, 'Well, your mailman is sick, and there's no one to replace him.'"

Mack Julion, president of the National Association of Letter Carriers, blames delayed mail and complaints on what he calls "unfilled vacancies" across the Chicago area.

"There have been more complaints over the past years, and that is directly attributed to the staffing levels are improper in Chicago," Julion said.

If a carrier calls in sick or is on vacation, or placed in a different position due to injury or even a promotion, Julion said those vacant routes are many times not replaced by another full time carrier.

Under FOIA, The I-Team asked about those vacancies, the USPS refused to release that information saying it was restricted to "internal personnel rules and practices."

However the I-Team found Chicago locations with the most missing and late mail delays. The top five racked up nearly 17,000 complaints in 2019 alone.

They include the Southwest Carrier Annex in Marquette Park, the Lincoln Park Carrier annex, the Henry W. McGee station in North Kenwood, and the Fort Dearborn station in River North. The station with the top complaints was the Loop Carrier Annex on West Harrison, which covers eight zip codes. It had 4,400 complaints in 2019.

Sefton showed the I-Team several emails she sent to the post office where she complained, and her suite is clearly marked with the proper business name and address.

"The late mail sometimes comes with yellow stickers on it that say undeliverable, un-forwardable, with our right address," said Sefton.

The three consumers in our story are only a few out of dozens of people who have emailed and called the I-Team.

The I-Team asked the USPS headquarters in Chicago for an on-camera interview about the complaints and staffing issues.

No one would talk, but in a written statement said USPS recently hired 50 letter carriers and that it's "a responsible employer that prudently matches our workforce to an evolving workload and adjusts staffing continuously, including work hours."

The USPS said its service in Chicago has seen vast improvement to its scores last year and just completed a very successful holiday season. It also added that it will "diligently continue" to investigate customer's concerns and correct deficiencies.

Turner said her service has not gotten better since she talked to us, and told the I-Team she's concerned for others.

"I don't want nobody else to go through what I am going though. It's sad," she said.

Customers who experience issues should contact their local postal station. Chicago customers can also call the Consumer Affairs number at 312-983-8403. In addition, customers can go to our website usps.com and click on "Contact us" at the bottom of our homepage.