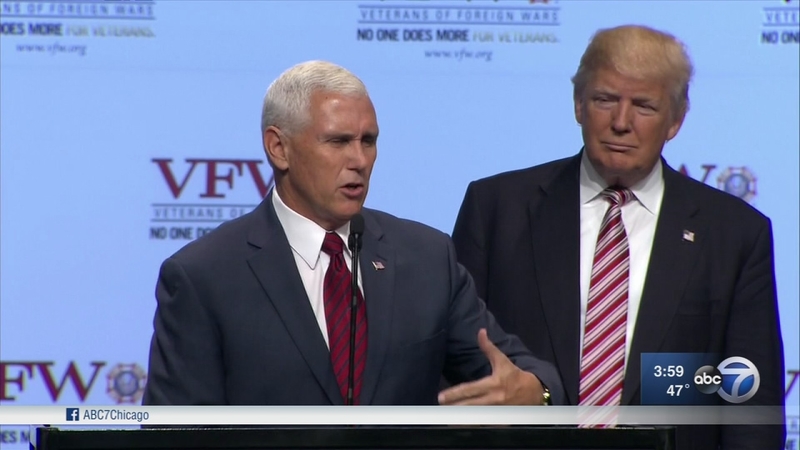 WASHINGTON -- President-elect Donald Trump shook up his transition team Friday as he plunged into the work of setting up his administration, elevating Vice President-elect Mike Pence to head the operations. The move, one of the first key decisions as Trump pivots from campaigning to governing, amounted to a demotion for New Jersey Gov. Chris Christie, who had been running the planning for months.

Pence would be the first vice president-elect in at least 40 years to take on the hefty transition job, and it's a sign of Trump's confidence in him. During the campaign, Trump suggested his vice president would run "domestic and foreign policy."

On the heels of Trump's victory this week, his team has begun to embark upon building a government, an enormous undertaking that probably will require Trump to alter his hands-on management style and consider going outside his insular group of loyalists. He has been scrambling to identify people for top White House jobs and Cabinet posts, a herculean task that must be well in hand by the time Trump is inaugurated on Jan. 20.

In a statement Friday, Trump said Pence would "build on the initial work" Christie started.

"Together, we will begin the urgent task of rebuilding this nation - specifically jobs, security and opportunity," Trump said.

Christie was a loyal adviser to Trump for much of the campaign. He offered a key early endorsement and came close to being the businessman's pick for running mate. But Trump ultimately went with Indiana Gov. Pence, a former congressman with Washington experience and deep ties to conservatives.

In addition, three of Trump's adult children - Don. Jr., Eric and Ivanka - are on the transition executive committee, along with Jared Kushner, Ivanka's husband. Kushner played a significant role in Trump's campaign and was spotted at the White House Thursday meeting with President Barack Obama's chief of staff, Denis McDonough.

The children's inclusion raises questions about the role the Trump family will play in the White House - as well as Trump's ability to separate the administration from his sprawling family business. The celebrity businessman repeatedly said during the campaign that his grown children would not follow him to Washington and would instead run the Trump Organization.

While TRump has long led a large business, the scope of the federal government exceeds any of his previous endeavors. Those around him say he'll likely have to make adjustments in his leadership style, including more delegating.

Trump has chafed at that a bit, signaling willingness to relinquish some but not all personal control.

For Trump, who ran on a pledge to "drain the swamp" of Washington insiders, the team is strikingly heavy on those with long political resumes.

And another apparent contradiction emerged Friday as Trump, who repeatedly vowed to repeal the Affordable Care Act "on Day One" of his administration, said that he would be amenable to keeping portions of Obama's signature legislative achievement.

Trump told The Wall Street Journal in an interview published Friday that after speaking with Obama at the White House the day before, he was considering keeping the prohibition against denying coverage because of a pre-existing condition as well as a clause that allows children to stay on their parents' insurance policies until age 26.

He also said that he wants "a country that loves each other" but said he did not regret his incendiary rhetoric during the campaign.

"No. I won," Trump told the newspaper.

Trump and Christie grew apart through the last stretch of the campaign. The governor became increasingly frustrated that Trump wouldn't listen to his advice, particularly over the response to the release of a video in which the businessman is heard making sexually predatory comments about women.

Christie is also facing calls for impeachment in New Jersey following the conviction of two former aides in the George Washington Bridge lane-closing trial. Christie has denied any knowledge of the lane closures until weeks or months after they occurred in September 2013.

Among the first decisions facing Pence and Trump is who to choose as chief of staff, a key post that will set the tone for Trump's White House and be a key conduit to Capitol Hill and Cabinet agencies.

Trump is said to be considering Steve Bannon, his campaign chairman and a conservative media executive, and Republican National Committee Chairman Reince Priebus for the role. Neither has significant policy experience, though Priebus is well-liked in Washington and has deep ties with key lawmakers.