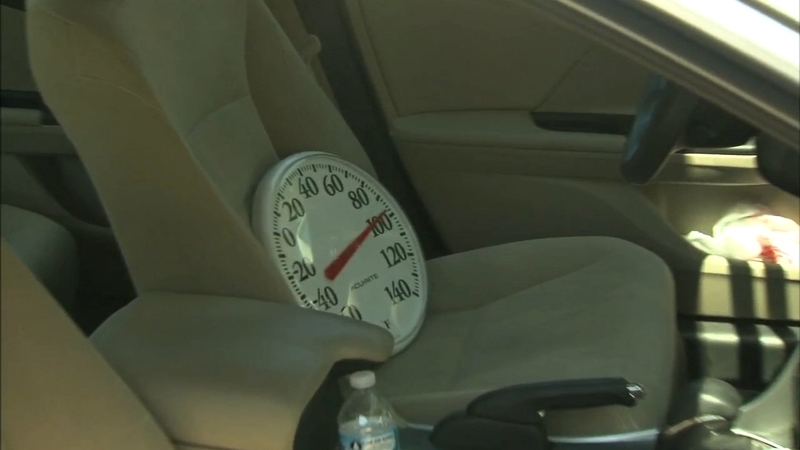 With the mercury rising, there's a renewed warning about the danger of leaving children and pets in hot cars.

The findings of a new study are shedding new light on how hot the interior of a vehicle can get in a short amount of time. Researchers at Arizona State University and the University of California-San Diego tested various passenger vehicles in 100-degree temperatures for about an hour.

A graphic explains how quickly the inside of a car heats up in warm weather.

In vehicles left in sunlight, the average cabin air temperature reached 116 degrees. The surface temperatures of the dashboard, seats, and steering wheel reached 157, 123, and 127 degrees, respectively. A temperature of 150 degrees is thought to be hot enough to cook an egg.

"Everybody knew from past experience that people can be killed by being left behind in cars," said Jeff Terry, an Illinois Institute of Technology physics professor who reviewed the findings. "This put a good solid number base on how long it takes to get up into the danger zone."

On Wednesday, a one-year-old girl was found dead in a Nashville pickup truck after police say her father dropped off the baby's sibling but forgot she was in the backseat.

Last year, more than 40 children in the U.S. died of heatstroke in vehicles, according to KidsAndCars.org, a child safety advocacy group that wants automakers to be required to equip vehicles with an alert system warning drivers about the presence of a back seat passenger when the car is turned off.

"Smaller mass takes shorter to come up to a higher temperature, so the smaller you are, the faster you're affected," said Terry.

Even in warm temperatures, a vehicle can get hot in a hurry.

ABC 7 conducted its own unscientific experiment on this 80-degree day. After turning off the air conditioning on a vehicle, a thermometer registered an inside temperature of about 70 degrees. But ten minutes later, the mercury read close to 90. And twenty minutes after that, it was pushing close to 100.