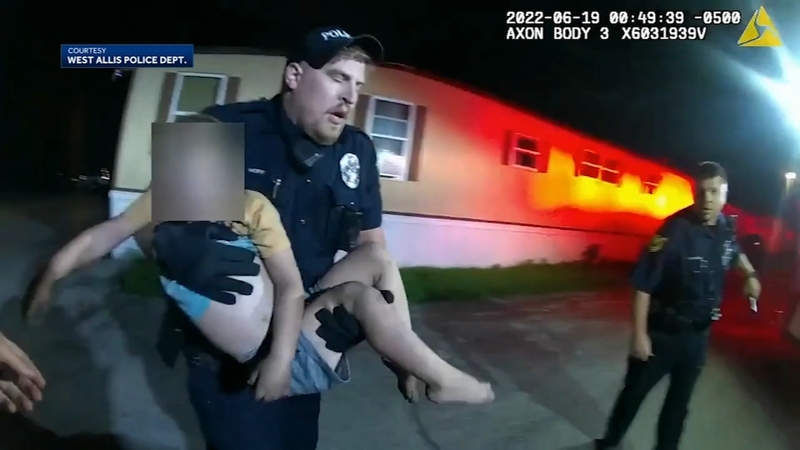 GREENFIELD, Wis. (WLS) -- An incredible fire rescue was captured on police body camera video in Wisconsin as police officers and firefighters burst into a burning home Sunday to save a little boy.

Two mobile homes were destroyed and another one was damaged in Greenfield, WISN-TV reports.

Crews said they knew they had mere seconds to get the boy out, and his mom said it's the reason her son is alive today.

The 3-year-old boy was in the back bedroom when fire ravaged his home.

Police body camera shows the officers bust through the glass to try and reach MJ Sancinati.

Through the smoke, they spotted him. The flames grow as one officer was lifted inside but can't reach the boy.

Then a firefighter ripped the window frame out, climbed inside and handed MJ to an officer, who raced with the boy in his arms to an ambulance.

His mother, Noelle Guy, watched the video for the first time Tuesday.

She said when the fire started, she got her mother with health conditions out first but couldn't get back in to save her son.

"I felt bad for not getting him out, but in the end, it was good because he has no burns," Guy said.

She said her son remains in the hospital on a ventilator with oxygen but is expected to pull through.

"I'm amazed they were able to get him out as quickly as they could," Guy said.

And she wants to thank the first responders in person.

Guy's mother is in a coma and on a ventilator.