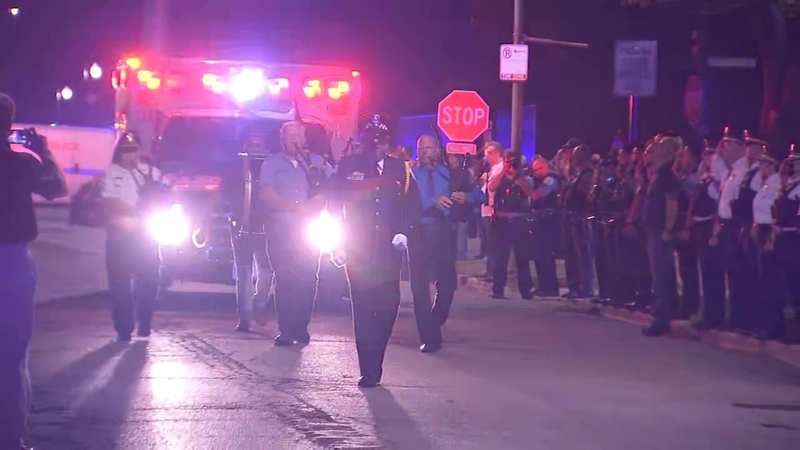 2 CPD officers shot, 1 killed in South Side shooting; 3 in custody

CHICAGO (WLS) -- Three people are in custody after two Chicago police officers were shot Saturday night. One of the officers later died from her injuries.

Chicago police said the shooting occurred about 9:10 p.m. in the 6300-block of South Bell Avenue in West Englewood, and it left the officers in serious-to-critical condition.

They were taken to University of Chicago Medical Center, where a crowd of hundreds of officers gathered after 10 p.m. to stand guard and pray. Some officers could be seen hugging each other; others appeared emotional.

A procession was held for a police officer who was killed in the line of duty.

We will #NeverForget the true bravery she exemplified as she laid her life down to protect others.

Please hold her family, loved ones and fellow Chicago Police officers in your thoughts as we grieve the loss of this hero. pic.twitter.com/kEUlNTv0Z4

She was part of the Cook County Sheriff's Office before joining CPD.

It is a loss Irma Ruiz-Collins understands all too well.

"There's an immediate sense of dread, of not again, of shock, of sadness," she said.

Named after her mother, Irma Ruiz-Collins is the daughter of Chicago police Officer Irma Ruiz, who was shot and killed confronting a gunman inside a West Side school in 1988.

Until Saturday, Ruiz was the last female officer to be killed in the line of duty.

"Your daughter was here to serve and protect. And now she'll be able to do that for you, not in the physical sense, but in the spiritual. And know that many, many people are thinking of you. And we love you and we're praying for you," Ruiz-Collins said to the French family.

A male officer continues fighting for his life Sunday. Sources tell the I-Team that the wounded officer has three gunshot wounds: One exited an eye, one lodged in the back of the head and one struck his shoulder.

At last check, he remained in critical condition in the ICU.

The pastor at his church said he is 39. The congregation offered a moment of silence during Sunday morning services, and the pastor prayed with the officer's family.

The partners were members of a neighborhood community safety team.

She was the first Chicago police officer to be shot and killed in the line of duty since Mayor Lightfoot took office in 2019.

"Despite the shock, grief, pain and sorrow we feel this morning, our brothers and sisters in blue put this uniform on each and every day. They go to work risking everything to serve the people of Chicago," Brown said. "They come to work, willing to run toward things, toward gunfire and they're willing to sacrifice their lives to save the lives of perfect strangers."

Mayor Lightfoot called on people to show support and work with police.

"I am here as mayor to declare an official day of mourning for our city," she said. "I also want to address another issue that's been lashing our city for far too long. There are some who say that we do not do enough for the police and that we are handcuffing them from doing their jobs. There are others who say we do too much for the police, and then we never hold them accountable for what they do, particularly in Black and brown neighborhoods. All of this, I say, stop. Just stop. This constant strife is not what we need in this moment."

Lightfoot asked that all flags at city buildings be brought down to half-staff.

Mayor Lightfoot and CPD Supt. Brown provided an update after a shooting that killed an officer and critically injured another.

Police said the officers were conducting a traffic stop with a third officer on South Bell, during which shots were fired by both those in the vehicle and CPD officers.

Officials said two men and a woman were inside.

At some point, someone inside the SUV shot at the officers, who returned fire, injuring the shooter, police said.

"Preliminarily, we believe the passenger of the vehicle is the offender who fired upon the officer," Brown said.

"They deserve our consideration, and they deserve our prayers every single day that they can return home safely to their families. Unfortunately, that didn't happen tonight, and our heart aches for the loss of life," Lightfoot said. "Every block, every neighborhood. We have to reclaim the physical and moral territory, shoulder to shoulder, fighting for each other, not against each other."

Two suspects were taken into custody after the shooting, police said. One suspect, who was shot, was taken to Christ hospital and remained stable.

The third suspect was taken into custody Sunday morning. Police have not explained how she initially got away.

Police also recovered a weapon from the scene and said none of the suspects have extensive criminal backgrounds.

Footage from two nearby security cameras shows the scene after the attack, as first responders arrive.

"We ask to see if Chicago to pray, and for both officers, their families, their fellow officers. We're struggling with the facts of this," First Deputy Supt. Eric Carter said early Sunday morning.