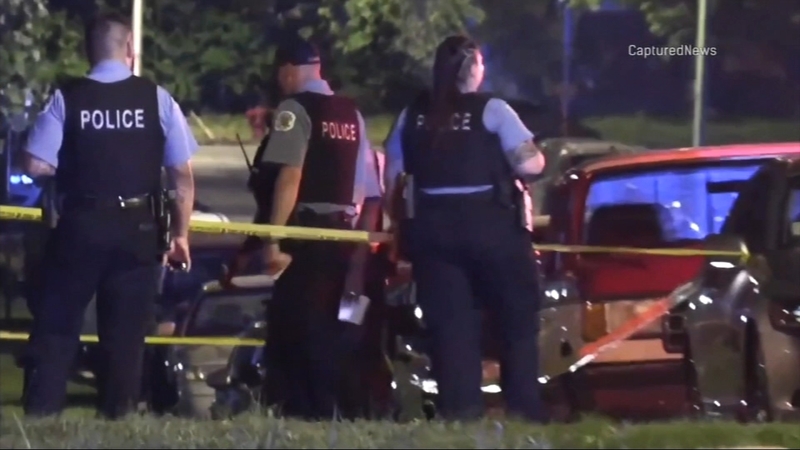 CHICAGO (WLS) -- The long holiday weekend is officially over, and CPD said 100 people were shot in Chicago since Friday night.

Brown defended his officers' work over the weekend, highlighting arrests and progress made on various cases.

He also expressed more frustration about the court system.

A 15-year-old boy is one of the latest victims of gun violence in the city.

Jevon Hopkins was on the sidewalk near 66th Street and Langley Avenue in West Woodlawn when a dark-colored car pulled up, and someone inside shot him in the back. He's in critical condition.

"These babies are out here being hit by bullets, it does not make sense," said Tayor Norwood of Good Kids Mad City.

One of the children hit by bullets is the young brother of Vontae, a member of a Good Kids Mad City. The group of young activists works to make a positive change in Chicago.

"It just strikes so close to home," she said.

There were at least 18 killed.

Vontae is now home taking care of his brother, who is recovering from his injures.

"The violence is not just happening in the summer or because of the summer, it is because the summer brings opportunity," Norwood explained. "So, if you are not going to address those issues at their roots, then you are going to keep running into the same problem."

During the same time period over the holiday last year, 87 were shot and 17 were killed.

This year's CPD safety plan going into the weekend included targeted protection for commercial districts across the city.

Police brass said the department was extensively prepared for a predictably violent weekend.

All 12,000 officers also had days off canceled, and worked 12-hour shifts, as the strategy included focusing on 15 violence-prone areas in Chicago.

"I think that is a beautiful question; did the safety plan work over the weekend?" Norwood said. "No, and you put cops on every corner."

"Just mayhem, and looking like Chicago was out of control," Pastor Donavan Price said. "There's nothing that the police can do about the people who are perpetrating crimes, and that's what needs to be addressed is the individuals and their needs.

Cops, courts point fingers at each other over who's to blame for violence

Brown praised the work of his officers on Twitter Monday, writing that they, "continue to work tirelessly to keep our city safe."

Our officers @Chicago_Police continue to work tirelessly to keep our city safe. As of today, #CPD has recovered over 6,100 guns: a 26% increase from the same period last year. I commend our officers for their continued hard work during these challenging times for law enforcement. https://t.co/uXPQfcwm87

On Tuesday, he said his officers risked life and limb to keep violence from happening.

"No one else would do the brave and courageous work the men and women of the Chicago Police Department do every day," Brown said. "There are too many violent offenders and too little consequences in our courts. There are too many illegal guns in our city."

"The courts have created an unsafe environment for large crowd gatherings, because you released people charged with murder back into the communities where they committed these heinous crimes," he added.

"One of the things we need to talk about and address are the number of people who are pulling triggers who aren't arrested and brought in for prosecution," responded Cook County State's Attorney Kim Foxx.

While 100 people were shot this weekend, as of Tuesday night the Cook County State's Attorney's Office has received just 11 cases referred by police. Nine have been approved for charges.

"We can't charge someone who is not caught," Foxx said.

Chief Judge Evans also rejected the police superintendent's claim that bail reform and electronic monitoring are behind the surge in crime.

Evans pointed out that out of 181 defendants charged with murder and released pretrial, only seven of them missed at least one court appearance, only 11 were charged with a new offense before trial, and of those 11, only two were charged with violent offenses.

"In other words, 94% of murder defendants released pretrial were not charged with any new crime, and about 99% were not charged with a new violent offense," Judge Evans said in a statement. "Any violent crime is tragic. But depending on many factors, the slight risk of re-offense would not have justified jailing even some murder defendants while they awaited trial. Prison before trial deprives defendants, who are presumed innocent, of their right to prepare for a defense, while leading to job loss and other personal and financial difficulties."

"I want you to know that we are doing absolutely everything we can to stem the violence," she said.

But Supt. Brown came under fire from aldermen.

"We must rethink our strategy, we must do better because simply more of the same will only provide us with more of the same result, which is more carnage, more death, and more failure in the city of Chicago," said 15th Ward Alderman Ray Lopez.

Alderman Byron Sigcho-Lopez also held a news conference with community leaders Tuesday morning, saying the violence is outrageous and making an urgent call for the city to change its crime strategy for a more holistic approach to tackling violence.

The alderman said none of the police strategies seem to be working at all.

One alderman called for the National Guard to be brought in to secure downtown Chicago, freeing up those officers to be used elsewhere.

"Take those officers from downtown and put them back in the community for the communities where a lot of this crime is happening," said 9th Ward Alderman Anthony Beale.

"We're all fighting a losing battle if the guns keep streaming over the border from the suburbs, from Indiana and from the southern states," Mayor Lightfoot said.

"This is incredible to think this is going on in this great city. This is creating a level of fear and concern in neighborhoods across the board," Durbin said.

"It takes all of us. No more blaming one another. We have blamed, we have pointed the fingers," said 16th Ward Alderman Stephanie Coleman.

The mayor said the police department is constantly revising its anti-violence strategy to respond to hotspots and she dismissed those calling for Brown to be replaced.

During Tuesday morning's CPD press conference, a Chicago police staff member appeared to faint. He was eventually able to get up and walk away with some help.