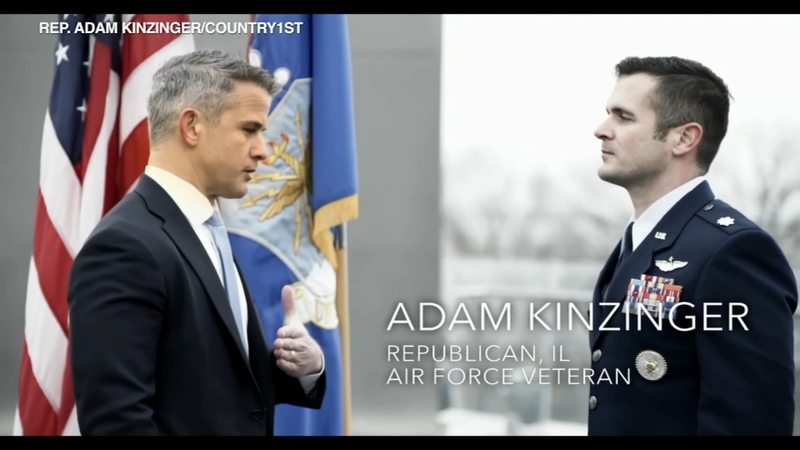 CHICAGO (WLS) -- Congressman Adam Kinzinger is launching an effort to reclaim the Republican Party, saying it's time to put the country first and not Donald Trump. If that splits Republicans, he said that may be what the party needs.

Rep. Kinzinger released a video as he kicked off his "Country First" campaign, an effort to refocus the Republican Party on the future.

"If you believe that we should be putting the country and our platform before Donald Trump, this is the place for you and we'll see how it evolves over time," Kinzinger said.

The congressman said it's not just about what happened at the U.S. Capitol on June 6.

"Look, I've been concerned with the dark narrative that's come out of the Republican Party," he said. "The divisiveness, you know, we talk about the Proud Boys and some of these fringe elements, QAnon, which I called out a year ago. Then to see these theories, conspiracy theories, likes about an election being stolen."

Illinlois Republican Rep. Adam Kinzinger speaks from lockdown as Trump supporters storm the capitol, predicting if they stay on this path the GOP "will be a failed party in the nea

"Reclaim for what, the over 70 million voters that elected and voted again for President Trump?" said George Pearson, chairman of the Will County Republican Committee.

"I think it's a healthy time for Republicans, with a variety of beliefs to come forward, and talk about what identity the party has, where we go in the future," said House Minority Leader Tom Demmer.

This weekend, Republicans from LaSalle County held a rally calling out Kinzinger, who they said hasn't met with them for six years. They see him as being out of touch with his constituents.
"Well, we in LaSalle County are all into apple pie and motherhood as well. But the fact is, he's describing the Republican Party that he knows as being a bunch of right wing idiots, and we're not," said Larry Smith, LaSalle County Republican Party chairman.

Kinzinger is unconcerned about the fallout, which has even come from his own family.

"I got a registered letter from someone of my dad's cousins basically disowning me, saying thing like I'm in the devil's army," he said.

The congressman said his initiative is more nationally focused, but added state Republicans need to take stock as well.

"We have lost the suburbs. We have lost, you know, the quote-unquote soccer moms, the ones who are very concerned with the tone of the party, but maybe typically like our policies," Kinzinger said.