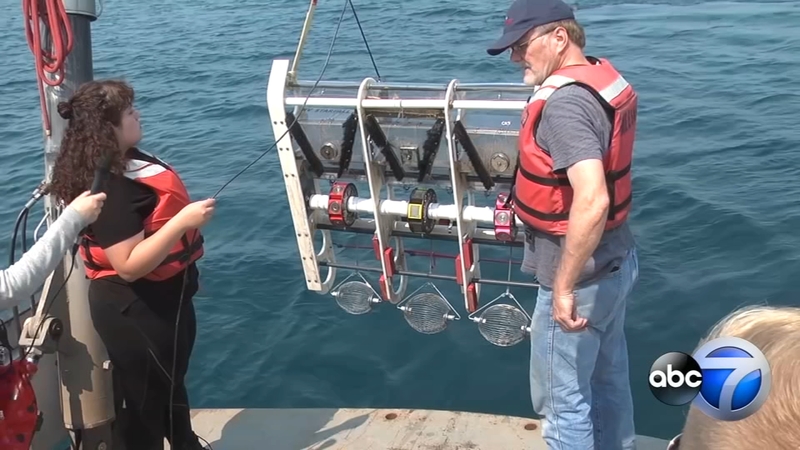 MANITOWOC, Wisc. (WLS) -- With a one-of-a-kind meteorite hunter called "Starfall" combing the depths of Lake Michigan, a team from the Adler Planetarium might pull off the improbable.

"It's never been done before. No one has a kit, there's no book that's been written," said Teen Programs Manager Chris Bresky of The Aquarius Project's task: deliberately search for and retrieve meteorites from the bottom of a lake for the first time in history.

"People have gotten used to the idea that oh well, they fall in the water then you're never going to get them back," explained Adler's director of astronomy, Geza Gyuk, of conventional wisdom.

That was surely the thought for many when a meteor streaked over Midwestern skies last February. It entered earth's atmosphere and "eventually the pressures get too much and it just sort of bursts," said Gyuk.

He added that the fragments sorted by size as the wind blew them east of Wisconsin, eventually falling into Lake Michigan.

Dr. Marc Fries, a NASA scientist, created a map of the likely meteorite landing field using weather radar imagery. He shared it with Bresky, who had taken an interest in the meteor sighting.

"The science is there, the scientists are excited but it isn't until the students of Chicago got excited that the thing took off," said Bresky.

Thus the Aquarius project was born with the combined brain trust of the Adler, the Field Museum and the Shedd Aquarium. Bresky said it's the first major project the three institutions have worked on together.

It's brought dozens of Chicagoland teens together, learning about meteorites and recovery efforts before testing a handful of prototypes--all student designed and student built.

"We needed something designed so that the water would go over it and push it down," said 16-year-old Carmen Jones of Starfall's new "hydrospoil."

"Especially as a girl and as a woman it's really scary going into science. Being able to work on this so independently, them trusting me, it's really empowering. It makes you feel good," said 17-year-old Giovanna Rossi of her experience.

A year and half later, Rossi and her fellow explorers put their project to work.

The day began before dawn, when Bresky and a group of teen researchers piled into a van. Some dozed off as they drove more than 170 miles north to Manitowoc, Wisconsin.

Just after 10 a.m., the group boarded Research Vessel Neeskay with the morning sun glistening on the water.

"I've done this before and I'm still speechless," said 16-year-old Jack Morgan, who had been on one of the two previous Aquarius voyages.

He was ready to connect the Great Beyond with the Great Lakes as the boat moved more than 10 miles offshore. The aptly named Starfall sled was lowered more than 200 feet to the lakebed. Then, the Neeskay dragged it along the depths of Lake Michigan. Starfall is covered in powerful magnets that the Aquarius team hopes will bring metallic meteorite fragments into holding containers on the sled.

From above, team members recorded data while watching a live feed that consisted mostly of quagga mussels and the occasional dust cloud. But it was still a mesmerizing image.

"Seeing it from the perspective of the sled is really fulfilling," said 16-year-old Spencer Darwall.

After an hour's search, Starfall returned to the boat. Anything rock-like or metallic was saved for lab testing. Then the team rinsed off the remaining muck and sent the sled back down.

Gyuk said that the lake's cold, fresh water likely will be keeping the meteorites in good condition; he won't know for sure until they retrieve some.

Even then, Gyuk said it's unclear what the scientific value might be; and the project isn't without flaws. The student-made sensors appeared to have trouble calibrating and the group lost GoPro footage to water damage for a second time.

For this group, that's no problem.

"I'm here. I'm doing this work," said an energetic Morgan of opportunities he expected he wouldn't have for years.

"I've learned so much along the way that no matter what I get out of this I'll be happy," added Rossi.

In that way, the Aquarius Project is already a success, inspiring new generations of explorers and energizing veteran researchers. All of this in pursuit of science for the sake of science.