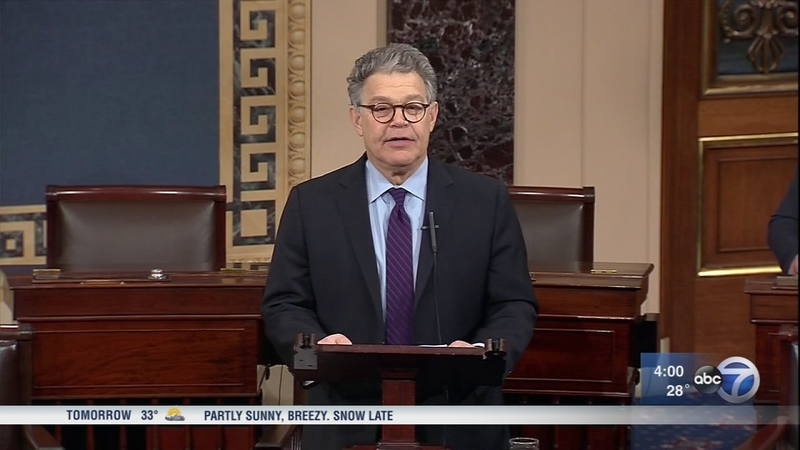 WASHINGTON -- Democratic Sen. Al Franken of Minnesota is resigning following allegations that he touched women inappropriately, he announced on the Senate floor Thursday.

"I am announcing that in the coming weeks I will be resigning as a member of the United States Senate," Franken said in an emotional address in which he said some of the allegations against him weren't true.

The push for Franken's resignation started after a woman came forward last month to say he had badgered her into an unwanted kiss before he was a senator and groped her while she slept.

That allegation set forth weeks of open deliberation about the political future of the unlikely comedian turned progressive darling.

Last month, Leeann Tweeden, a morning news anchor on the AM radio station KABC in Los Angeles, posted her story on the station's website, saying Franken forcibly kissed her and groped her in 2006 during a USO tour.

"The first thing I want to do is apologize: to Leeann, to everyone else who was part of that tour, to everyone who has worked for me, to everyone I represent, and to everyone who counts on me to be an ally and supporter and champion of women. There's more I want to say, but the first and most important thing---and if it's the only thing you care to hear, that's fine -- is: I'm sorry," Franken said in the email statement.

As condemnation increased in the wake of the story, Senate Majority Leader Mitch McConnell, R-Kentucky, called for a Senate Ethics Committee probe into Franken, and Franken said repeatedly he would cooperate with that investigation.

But in the coming days and weeks, more accusers have come forward.

A woman came forward to CNN to say Franken, as a senator, grabbed her buttocks while taking a photo at the Minnesota State Fair in 2010.

The Huffington Post reported two more women accused Franken of inappropriately touching them in 2007 and 2008.

Franken went on to speak with media outlets in his home state of Minnesota, saying he was "embarrassed and ashamed," but hoped to regain the trust of those he let down.

An Army veteran told CNN later that Franken groped her on a USO tour as well before he was a senator. The woman, Stephanie Kemplin, said Franken cupped her breast while she was deployed in the Middle East during the Iraq War.

After Kemplin came forward, a spokesman for Senate Minority Leader Chuck Schumer said the Democratic leader would not comment on the allegation against one of his fellow Democrats.

Then on Wednesday, Politico reported a former Democratic congressional aide said Franken tried to kiss her forcibly in 2006. CNN has not yet verified the claims in the Politico story, but Franken flatly denied the allegations in the report.

Shortly after, New York Democratic Sen. Kirsten Gillibrand called for Franken to resign, and other Democratic senators posted statements in swift succession. In the span of a few hours Wednesday afternoon, dozens of senators said Franken should go -- including Schumer.