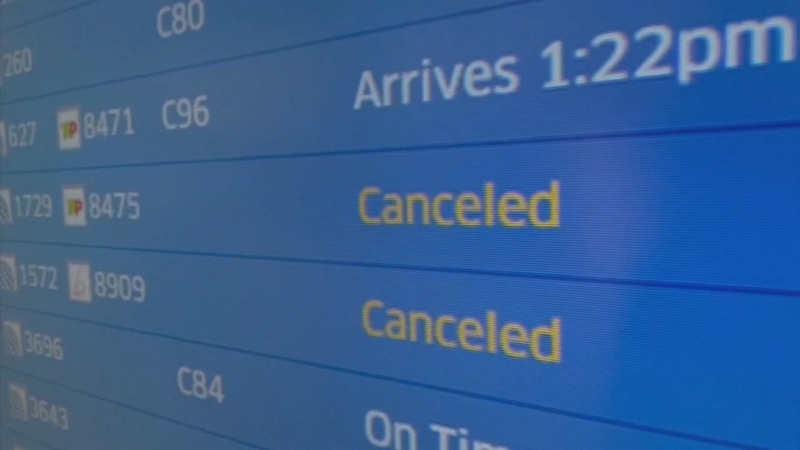 CHICAGO (WLS) -- The day after Christmas, the rush home got underway as airlines continued to cancel and delay flights nationwide. The travel nightmare was only compounded by rising COVID numbers.

Many holiday travelers woke up airports Sunday morning, struggling to get back home. It comes as airlines nationwide have been forced to cancel flights amid a surge of COVID-19-related staff shortages.

The U.S. is still seeing a travel surge despite a surge in COVID cases nationwide. TSA has been screening nearly 2 million passengers at U.S. airports each day this week.

"One of my best friends is stuck in Mexico right now, and her family tested positive," traveler Lucy Burke said. "They got kicked out of their hotel room. It's just a whole disaster."

Burke and her sister, Charlotte, were back home in Chicago Sunday after a scare coming from Mexico.

"It was a lot of more stress around the return travel, if we could get back," Burke said. "We had friends that were testing positive and we were really worried. We were like, 'We don't know what we're going to do if that happens.'"

According to the FlightAware tracking website, more than 1,300 flights were grounded across the country Sunday, adding to a growing list of aircrafts already facing the same fate with more than 5,000 flights canceled since Friday.

Airlines have been hit with a shortage of staff and crew after many called in sick due to the spread of the omicron variant. Weather in the Pacific Northwest is also to blame. It comes at the worst time, with travel expected to surge Sunday through the new year.

"I hope that people are safe when they travel, and that they get to where they need to be. Hopefully, they get home," traveler Charlotte Burke said.

Ed Farley sat by himself with his luggage at his side and phone in hand, scrolling for new plans after his flight to Washington D.C. was canceled.

"I was flying out of Delta but now I'm going to try Southwest and see what happens," he said.

While the holiday rush is now behind some travelers, others are bracing for the trip ahead.

"I actually came here for my dad's funeral, I'll go ahead and share that," said Kate Latapie, who was traveling back to France. "I feel like he's been watching over us the whole time. We feel really blessed and that this plane is going to take off, so he's up there helping us out."