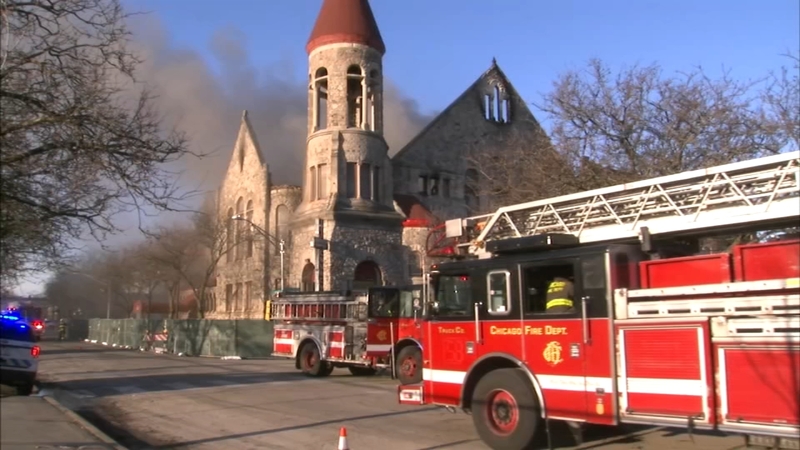 CHICAGO (WLS) -- A fire at a beloved landmark church in Englewood reignited on Saturday morning.

Fire personnel said it was too early to tell what reignited the fire, but mentioned hot spots and burning timbers sitting in the church. They were able to save the school located next door, but remain concerned about the possibility of standing walls coming down.

Antioch Missionary Baptist Church will move its Easter Sunday services after the fire destroyed its building on Friday afternoon. Services will be held at Calahan Funeral Home at 7030 South Halsted Street at 10:00 a.m. Sunday, the church said.

Fire investigators Saturday ruled the blaze accidental and determined it was caused by crews using a propane torch while doing work on the building's roof.

"When I look at it. It's devastating and it's a great loss," said lead pastor, Gerald Dew. "We mourn. We mourn the loss of this sacred space."

Firefighters were originally called to the church in the 6300-block of South Stewart Avenue around 2:15 p.m. Friday. A fire appeared to have started on an upper floor and quickly spread throughout the structure. No injures were reported and the cause of the fire remains unclear.

Most of the building's truss roof had collapsed by 3:00 p.m., department spokesman Larry Langford said.

It was unclear if anyone was inside the church when firefighters were dispatched, he said. The fire appeared to begin in the upper rear of the church, where crews first noticed heavy smoke. Flames could be seen coming out windows of the church in a video posted to social media.

"This church is an anchor in this community," Dew said. "This is a place where people have gotten married, found their faith, they've been encouraged, they've been equipped and empowered. It's a neighborhood church."

Chicago fire officials officially declared the fire struck out shortly after 4:00 p.m., though firefighters were still fighting flare-ups and hotspots for several hours after.

Fire engines had to return to scene several times Saturday to put out hot spots of burning debris flaring up under the building's collapsed roof.

"Once the roof collapsed, all the contents below it could still be burning. But with the roof on the top of it, the water isn't penetrating to get down into the debris," said Deputy District Chief Curtis Hudson with the Chicago Fire Department.

"Most of the roof is gone," Langford said. "It was a very popular church in the Black community."

Dew said he does not believe anyone was inside the church at the time of the fire. Shortly before the blaze began, church members had filled the pews for holiday services to mark Good Friday.

"I know this: If we've got to lose something, losing it on Good Friday is the best time to lose it because after Good Friday comes resurrection Sunday," Dew said. "I'm committed to sharing the challenging message dealing with resurrection power."

Tara Deramus had to see it for himself.

He didn't want to believe his beloved church was gone.

"I was baptized here at 7-years-old and my mother was one of the older mothers of the church. She passed and we have her funeral services here," Deramus said. "When I heard about it, it broke my heart."

Antioch missionary got its start in 1925 and eventually settled at it's currently location in 1958.

And while church members were devastated by the loss of the historic structure, they were also optimistic about the strength of the congregation.

"It's beyond the walls of the sanctuary, we are a family beyond the church walls. And we love each other," said Marquita Gill, church member. "It's very devastating, but I know we'll get past it."

"All this does for us is gives us a greater reason to redouble our efforts to be intentional about our involvement and commitment to this community," Pastor Dew said.

Incredibly, even with their church home ravaged by flames, those in the congregation hoping to gather in person for Easter Sunday service will be able to after nearby Calahan Funeral Home offered their chapel at no cost to the church.

"This church found themselves without a place to come and worship. We knew that we could help and so we reached out," said Shirley Calahan, vice president at Calahan Funeral Home.

"You can't remake a life, but we can remake a building," added Edward Calahan, president of Calahan Funeral Home.

"We hope that there will be a renewal, recovery, rebuilding, resurrection as it were," Dew said.

At one point a firefighter was seen being taken away in an ambulance. Officials said he slipped on the street and twisted his ankle; he was not injured by the fire.