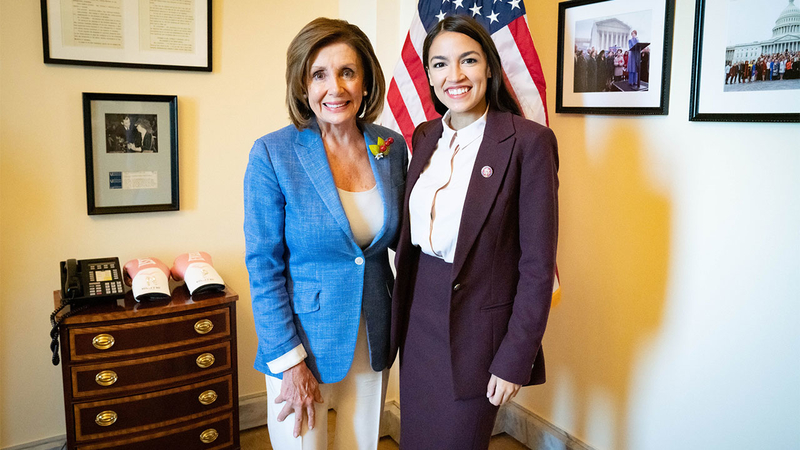 WASHINGTON -- House Speaker Nancy Pelosi is downplaying any differences with high-profile progressive lawmaker Alexandria Ocasio-Cortez, saying she had a "nice meeting" Friday with the social media dynamo who's made some tart observations about the Democratic leadership team.

Pelosi told reporters that "I don't think we have that many differences" despite some sharp words back and forth recently with "AOC," as she's referred to by her 4.9 million followers on Twitter.

"In our caucus, we have our differences. Respect that instead of making a big issue of it," Pelosi told reporters, displaying a little exasperation with the media's fixation with their relationship. "We just had a meeting to clear the air."

Today, Congresswoman @RepAOC and I sat down to discuss working together to meet the needs of our districts and our country, fairness in our economy and diversity in our country. pic.twitter.com/eVp1LS0Gpw

Corbin Trent, a spokesman for Ocasio-Cortez, said, "It was a very positive and productive meeting about progressive priorities."

The pair had quarreled publicly over the clout of the freshmen who handed House control back to the Democrats in last year's election. Pelosi had noted that the so-called progressive "squad" of four women of color that includes Ocasio-Cortez is only four people strong among dozens of Democrats. Ocasio-Cortez, in turn, accused her of "singling out" women of color.

The two met for around 30 minutes earlier Friday. Pelosi, second in line to the presidency, said, "I don't think there ever was any hatchet" to bury. She compared the dynamics to a family resolving a disagreement.

Ocasio-Cortez recently criticized Pelosi, saying she felt Pelosi had been "outright disrespectful" by "the explicit singling out of newly elected women of color" for criticism. Pelosi had remarked that Ocasio-Cortez and a cohort of other progressives were just four votes in a large Democratic caucus.

Pelosi declined to respond to Ocasio-Cortez' criticisms. She said she has met with her colleagues all the time and said they discussed Ocasio-Cortez' committee work on the Oversight and Reform and Financial Services panels.

President Donald Trump in July assailed a group of Democratic congresswomen of color as foreign-born troublemakers who should go back to the "broken and crime infested places from which they came," ignoring the fact that the women are American citizens and all but one was born in the U.S.

Ocasio-Cortez, 29, and Pelosi, 79, are both political dynamos from different generations and life experiences. Pelosi entered elective politics after having five children and rose through a male-dominated House of Representatives to its highest post. Ocasio-Cortez rode a wave of progressive sentiment to win a Democratic primary last year over former Rep. Joe Crowley and the weakened Queens Democratic machine.

Democrats have rallied around Ocasio-Cortez and three other progressive freshman women, including Ilhan Omar, D-Minn., a Somali immigrant and U.S. citizen, after President Donald Trump tweeted last week that the quartet should "go back" to where they came from.

Progressives like Ocasio-Cortez have sometimes sharp differences with more moderate Democrats hailing from more politically challenging congressional districts, and Pelosi has been protective of the moderates. Last month's vote on a bipartisan bill to care for migrant refugees flocking to the U.S.-Mexico border created hard feelings between the two sides.