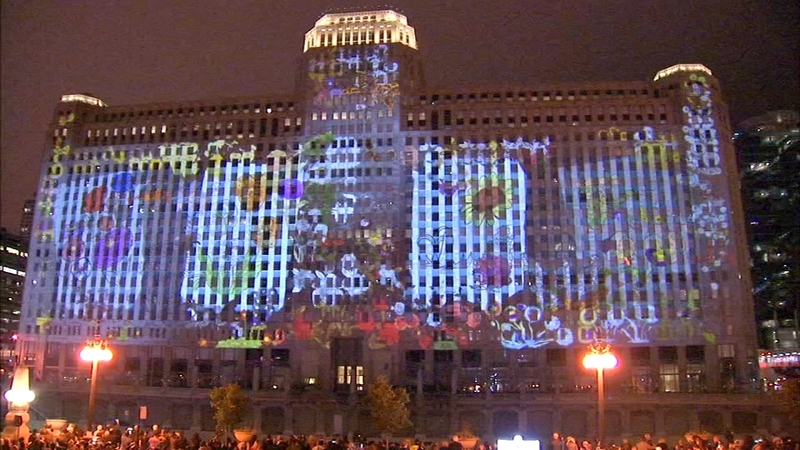 CHICAGO (WLS) -- The largest digital art projection in the world was unveiled Saturday night in Chicago.

"Art on theMART" turned the Merchandise Mart's entire 2.5-acre south wall into a canvas of public art which was seen by thousands lining a closed-to-traffic Wacker Drive. The building is officially now known as theMART.

To say this is a huge moment for the city's public art scene is an understatement.

"If you consider what happened mid-century with the Picasso on Daley Plaza, the flamingo, Millennium Park with the Cloud Gate, known as the Bean, this is the next moment of iconic public art as a gift to the city," said Cynthia Noble, director of "Art on theMART."

The installation will display, to start, the work of three digital artists, Including Chicago-based Jason Salavon, who got to see his piece for the first time Saturday night along with everyone else.

"I was listening to audience cues. Are they getting this moment? Is this thing coming off like i expected? The wall is new to all of us. The surface is new as an artistic canvas," Salavon said.

Find out what it takes to project bright, colorful art across the Merchandise Mart's 2.5 acre facade.

The high-tech canvas uses what is essentially artificial intelligence to create the displays. The nearly 40-minute show passed nearly in complete silence as the audience took in every new scene. A fireworks display punctuating the end of the show.

"It was more artistic than I pictured it to be. I was imagining it to be more digital, flashy pyrotechnics, but i thought it was really neat," said Evan Fry.

"It's pretty cool. And it makes you wonder how good it's going to get. It's only going to get better, grow and develop and the artists will be able to highlight their stuff," said Caitlin Stone.

This is not some short term thing. "Art on theMART" is set to run for the next 30 years, two hours a night, five days a week, 10 months out of the year.